Sign in / Register
HomeInstrumentationsQuintetTräumerei in F for Saxophone Ensemble S,S,A,T, & B

Träumerei in F for Saxophone Ensemble S,S,A,T, & B

By: Robert Schumann
For: Quintet
This music is in your basket
View basket
Loading... 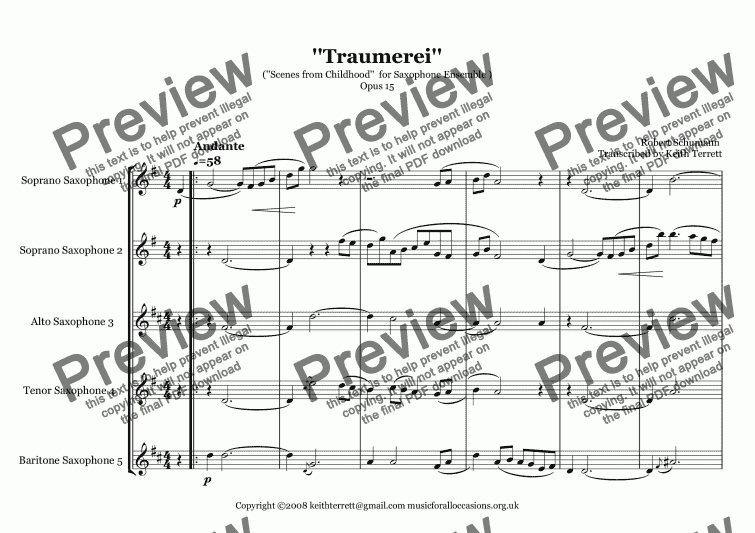 Träumerei in F for Saxophone Ensemble S,S,A,T, & B

By: Robert Schumann
For: Quintet

Composer
Robert Schumann
Year of composition
1838
Arranger
Keith Terrett
Publisher
Music for all Occasions
Difficulty
Difficult (Grades 7+)
Duration
3 minutes
Genre
Classical music
License details
For anything not permitted by the above licence then you should contact the publisher first to obtain permission.

An arrangement of Robert Schumann’s delightful miniature ’’Traumerei’’ for Saxophone Ensemble, from his ’’Scenes from Childhood’’, originally composed on February 24th for Pianoforte.

The instrumentation is SSAT & B.

There is alternative version one tone lower, and in case you have a problem with Soprano saxes, I have given alternative parts for Alto’s. If you wish you can have one Sop and two Alto’s, or two Sops and one Alto, or three Alto’s!

Nr. 7, Träumerei, is one of Schumann’s best known pieces; it was the title of a 1944 German biographical film on Robert Schumann.Träumerei is also the opening and closing musical theme in the 1947 Hollywood film Song of Love, starring Katharine Hepburn as Clara Wieck Schumann.

Reviews of Träumerei in F for Saxophone Ensemble S,S,A,T, & B