By: Michael Morse
For: Large mixed ensemble
This music is in your basket
View basket
Loading... 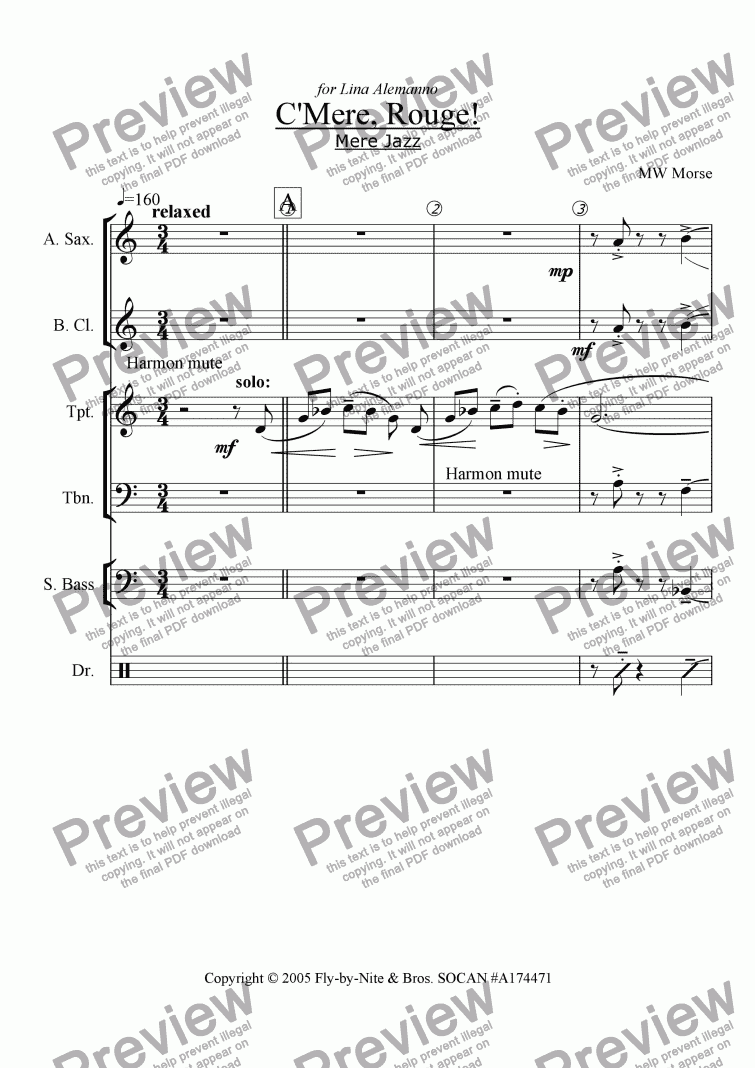 Composer
Michael Morse
Year of composition
2005
Lyricist
none
Publisher
Fly-bi-Nite & Bros.
Difficulty
Difficult (Grades 7+)
Duration
4 minutes
Genre
Jazz music
License details
For anything not permitted by the above licence then you should contact the publisher first to obtain permission.

A new piece for the Dignity of Labour Ensemble, featuring (and dedicated to) the marvelous trumpeter Lina Alemanno. Born out of a jazzy section of a recently finished piano sonata, the piece explores parallel harmony in inner-voice perfect fourths, slight tempo contrasts, and a triple meter that sounds (and feels) quadruple.

A suitable explanation from a recent textbook on voice-leading:

I surely enjoyed finding out how odd it is that chance findings in the web can change one’s life into a digital counterpoint, where the burden of senseless googling will crucify aching shoulders, smiting the wicked with pies and ridicule, while, on the road to Damascus, young Franz and my lovely daughter, Sophie here, from Elysium, Ohio, [line missing] which is the reason why the flowers never [lines missing; something about a donkey?].

At the last moment, the threatening beast jumped on the escape key, sat up at the typewriter, singing "all the works of Shakespeare!" to a melody in parallell thirds, faintly related to the lamb chop cooking song of the Dorians, who for thousands of generations believed their flat space ships would return to Pluto. However, with the recent increase in downtown sailboat incidents, we find that we must be prepared. Maybe those reported ’navigation problems’ have a more sinister explanation.

They are here! Three blocks down, past the old railway station, and - watch their leader - the hairy spider next to the pink umbrella! She is morphing into - not the sun, nor the son - but a strange, dark shadow hovering over seven coal miners heading home from a hard day of chasing silent magpies through the stone age library.

If only there was some national policy on library book returns, said the first man - who was not afraid of mere rouge.