By: Rossini
For: Brass quartet
This music is in your basket
View basket
Loading... 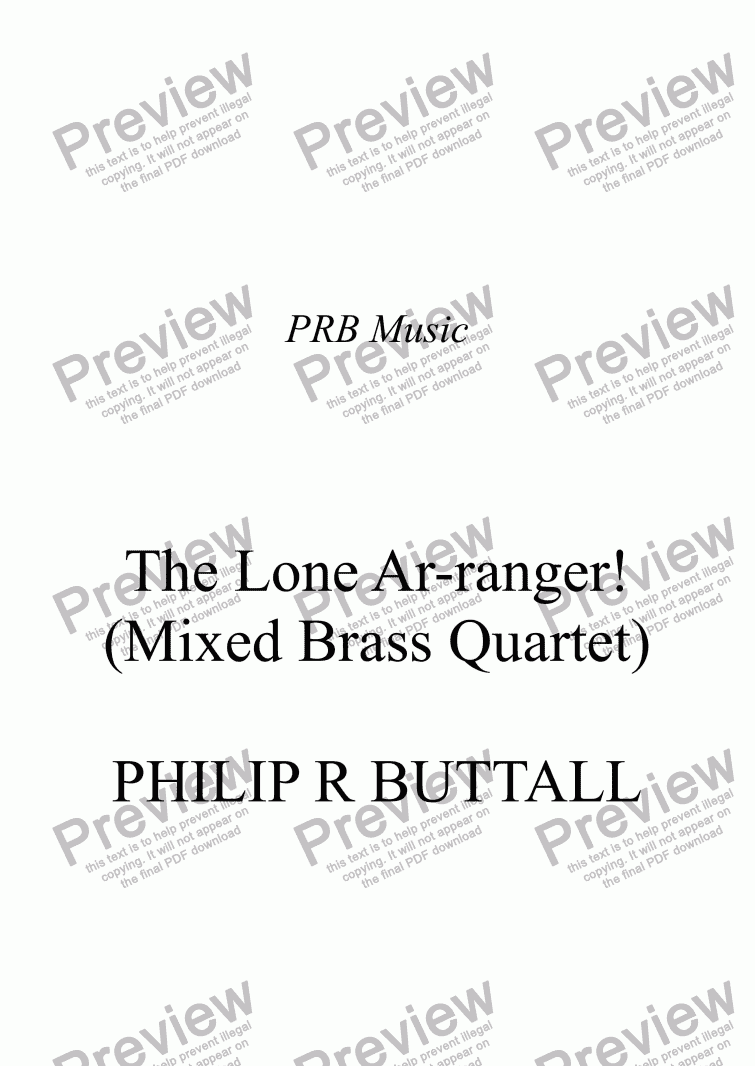 By: Rossini
For: Brass quartet

Composer
Rossini
Year of composition
2005
Arranger
Philip R Buttall
Publisher
PRB Music
Difficulty
Difficult (Grades 7+)
Duration
3 minutes
Genre
Classical music
License details
For anything not permitted by the above licence then you should contact the publisher first to obtain permission.

The Lone Aranger!, in its version for Brass Quintet, would seem to have been quite successful. However, since it appeared on the website, I have had some enquiries for a quartet version, and especially ones where different instrumental combinations are needed.
Hopefully this version for brass quartet should fill the gap. Two different combinations I have already been asked for are: (a) Two Cornets, Horn & Euphonium, and (b) Two Trumpets & Two Trombones.
I am therefore providing a full score where the top two parts are essentially as for the quintet version (with occasional slight adjustments for part-writing reasons etc.), with Part 3 either for horn or trombone, and Part 4 either for trombone or euphonium. Both Parts 3 and 4 are essentially the same, though with occasional adjustments for their different instrument ranges. In the sets of parts, I have included a Part 3 for Tenor (Eb) Horn, and both Trombone and Euphonium parts are available in treble of bass clef, as necessary. Al Naylor, Trumpet Professor at Coe College, Cedar Rapids, Iowa, USA, has just asked for a version of Trumpe 2, transposed for Horn in F. This is also now available - there are a couple of ossia suggestions where the original trumpet part might take less experienced players to perhaps dizzying heights!
Following a number of requests worldwide, I have now uploaded a special non-playing score, which lists, and identifies all the tune fragments used in The Lone Ar-ranger!
Click here for further information.