By: Claude Debussy
For: Concert band / wind band
This music is in your basket
View basket
Loading... 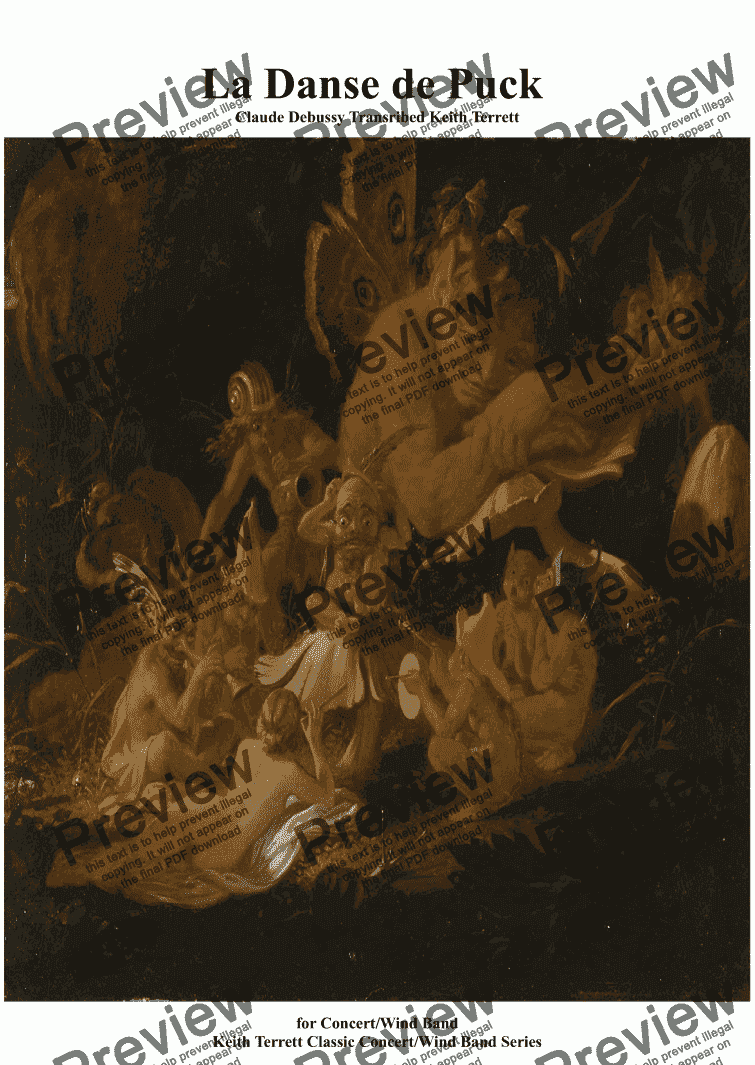 Composer
Claude Debussy
Year of composition
1909
Arranger
Keith Terrett
Publisher
Music for all Occasions
Difficulty
Difficult (Grades 7+)
Duration
3 minutes
Genre
Classical music
License details
For anything not permitted by the above licence then you should contact the publisher first to obtain permission.

I have used the Wiener Urtext Edition as the basis for my arrangement, and various recordings, which include the excellent Naxos compact disc featuring Francois-Joel Thiollier on Pianoforte.

This is part of the work set by the Associated Board of the Royal Schools of Music, of two piano pieces arranged for full band, as part of my Master’s Degree, and would not normally have been a work I would consider suitable for band; due to its complex piano idioms, and textures.

After completing the work, I now think it an excellent work for bands to explore, and hopefully there are interesting and challenging parts for everyone.

I hope to have captured some of the virtuosity and inventiveness that Debussy recreates in the original version for Piano of ’’La Danse de Puck’’ in this transcription for band.

The form is a Rondo-like variant, mainly in the Dorian mode.

Puck is represented in this arrangement by the Soprano saxophone, aided by the Flute, Clarinet and Marimba.

A moderate tempo should be held throughout the work, with full attention paid to the detailed dynamics and constantly rebounding dotted rhythms. In fact, the many crescendi and decrescendi should be slightly overdrawn to reinforce the evanescent character of the music.

This attention to detail will help to re-create Shakespeare’s original humorous mischief-maker and spirit of the night(In Shakespear’s ’Midsummer Night’s Dream’, Puck is an irrepressible sprite whose acrobatics and escapades are depicted in Debussy’s ’’Puck’s Dance’’).

’’La cathedrale engloutie’’ and ’’La fille aux cheveux de lin’’, are also under preparation for band and eventually an orchestral version of each item too.

This is the first in my collection entitled Keith Terrett’s ’’Classic Band Series’’. Other works to be included will be some of the works of Handel, classic overtures by Verdi, Glinka & Mozart, and works from a variety of neglected British composers such as Frank Bridge, and Ethel Smythe.

There has been at least minor controversy over whether Debussy’s La danse de Puck (Puck’s dance) was inspired by the mischievous fairy (also known as Robin Goodfellow) in Shakespeare’s A Midsummer Night’s Dream or the Puck in Kipling’s Puck of Pook’s Hill. The composer was familiar with both works, but seemed to have taken the former as his springboard for this, the penultimate of the Preludes (12) in Book I. Both literary characters, however, fit the lighthearted and playful manner of the music in the work, and thus either or both can be taken as the composer’s inspiration here. The piece opens with a playful, carefree theme that often stops or shifts its cutely menacing focus. Its second subject maintains the mischievous mood, but a second theme soon appears, bringing on an ethereal, somewhat fairy tale-like atmosphere. All the material goes through some level of development, but the overall sense of playful mischief dominates throughout the piece. This work typically lasts three minutes and however its source of inspiration is viewed (some even believe Debussy is depicting himself in the music), this Prelude will appeal to a wide audience.