By The River Bank

By: Jamie Brown
For: Wind quartet
This music is in your basket
View basket
Loading... 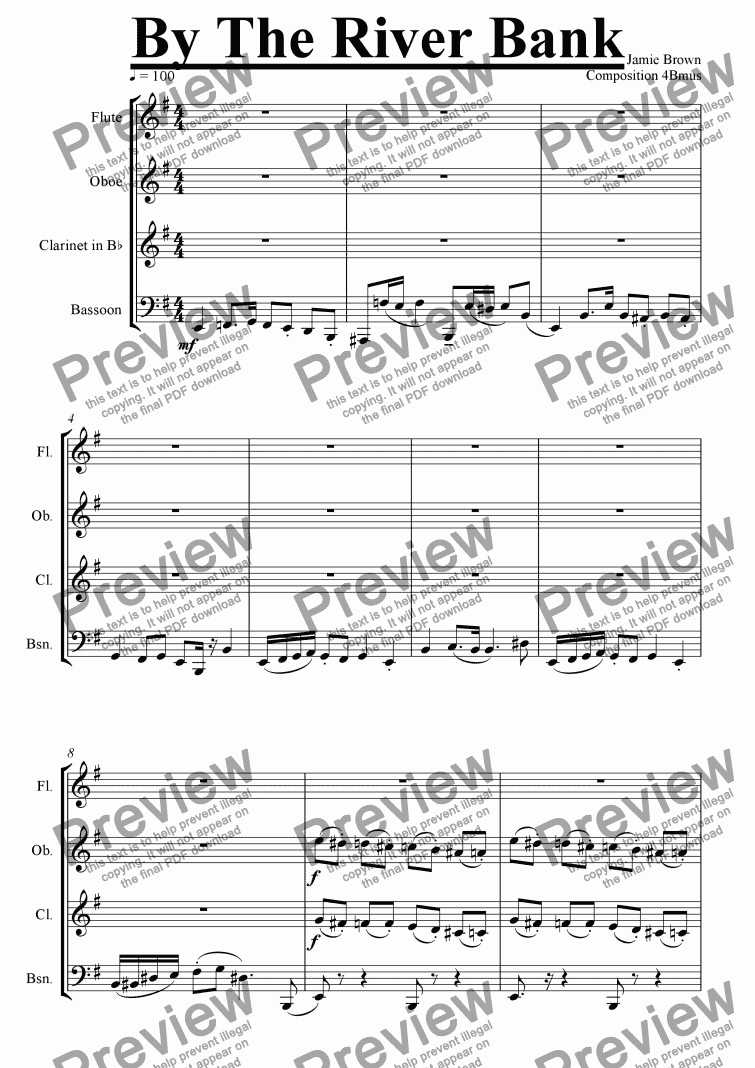 By The River Bank

By: Jamie Brown
For: Wind quartet

Composer
Jamie Brown
Year of composition
2005
Lyricist
none
Difficulty
Difficult (Grades 7+)
Duration
5 minutes
Genre
Modern classical music
License details
For anything not permitted by the above licence then you should contact the publisher first to obtain permission.

By The River Bank As the title suggests the piece is representing a scene, and I was desperate to convey those images across in a musical form. As a time signature I decided on common time, but employed complex rhythm to make the piece exciting. I set the BPM at 100 which I felt wasn�t so fast that it would become irritating to the ear, and not so slow that it became stagnant and boring.

I didn�t decide on a key signature until I had the melodic concepts in place. I felt that this would prove an interesting exercise and would wait and see what developed from within it. The result was, that I had seamlessly achieved to change key 6 times, using both minor and major keys.

This piece was heavily musically influenced by a piece of musical theatre that appeared at the Leeds Playhouse sometime last year, �The Wind In The Willows�. I decided to try to recreate the musical style, with comic values and create a substantial piece that moves through a selection of different animal themes. I have deliberately not labelled the sections, in an attempt to try to make the music personal to the listener, and let them decided which animal is represented in each section.

Due to the length of the piece a great use of dynamics has been applied to give contrast, and to distinguish between melodic and harmonistic styled instrument playing. This caused me problems at times, as I had decided to use a wind quartet for full sounding playing. I needed one melodic line, one fundamental bass line and the other two lines had to represent the chordal movement, while at the same time giving the piece rhythmical movement.

As I have already mentioned the piece has many different sections that are clearly marked upon the score. All together there are 9 sections and the final 1/10th reiterates the beginning of the first section. Looking at this from a more analytical point of view, and from the figures just mentioned, I feel that the piece has well balanced mathematical proportions, which are instrumental to the success off the piece.

Looking at the piece from a harmonic construction view, I have noticed that due to the sheer length of the piece I have use most if not all harmonic techniques, including counterpoint, block, unison, solo etc. The variety of harmonic styles prevents the piece from becoming repetitive and tedious.

The melodic lines seemed to develop themselves as I gradually worked on the piece, and I made great use of chromaticism and basic but fundamental classical style harmony.

I have again used many compositional devices within the piece such as glissandi, staccato, accents, trills, and grace notes. By using different types of instruments and styles I was able to open up a completely new avenue of composition for me.

The harmony, as I previously mentioned, goes through many different types including making use of counterpoint towards the beginning of the piece. Had I done all band style pieces I would not have had the opportunity to explore this device. Section E is of harmonic interest as it develops a chord pattern through a bass note and a two-note chord, which then moves about in a modal like fashion. I learnt about these for the first time when looking at the playing of Miles Davis on �Kind of Blue�. Another section worthy of a mention is section C; I felt that I managed to create a stately style and powerful sound, which led in well to the abstract section before letter D.

I think the piece works really well because of its well-remembered and quirky melodies, and would relate well to the visual concepts from which it was conceived. As well as been a fun and interesting joke style piece, it also has elements of virtuoso playing within it. Examples of this are the clarinet part before and through letter F, and the highly skilled Flute playing required throughout the piece.

Piece 3: Tick This piece was a creation of contemplation after completing all other pieces, and was a conscious decision to use more rhythmical persuasion and complex time signature playing.

With this in mind, I set about creating a score with many time changes, to make me consider pulses and rhythmic overlapping. I employed the time signatures 4/4, 13/8, 3/4, 5/8 and 6/8, believing that these would give me a wide variety and scope to work with.

The only influence for the piece that I could think of would perhaps be Latin percussion lessons, developing workshops for children playing rhythm, and the thought of time and clocks; Hence the title of �Tick�.

As the piece has hardly any melodic content, other than the bass line, which I created as a kind of musical glue to hold the piece together, dynamics were used to their best advantage, keeping the piece moving and giving a kaleidoscopic effect of linear rhythms; allowing repetition without the listener getting jaded and agitated.

The structure of the piece can be complicated, but I felt it better to look at it as pockets of texture between each time signature, with the latter half of the piece demonstrating staggered rhythms, which gradually fall back to the introduction style of a ticking clock. This is all held together with Latin type breaks where the whole band phrase the same rhythm leading into the next section.

The piece very much relies upon the listener�s ear not been able to distinguish between the different percussive parts creating a very complicated syncopated fortification of crossed beats. The bass line stays very simple throughout, so as not to detract from the fundamentals of the main body, which is the percussive tone.

At points in the piece I decided to imitate a drum kit style of playing by giving resembling instruments their individual parts, this can be seen in bars 80 onwards.

With hindsight, having now written the piece, I recognise that this composition could possibly be a teaching aid at secondary school level, providing more advanced classes with rhythmical stimulation, enabling them to develop skills to facilitate their own compositions.

0riginally the tempo of the piece sounded too fast for imitating a clock, however I later found that the piece at very slow speeds became repetitive and uninspiring by the end. Therefore, I was left with somewhat of a dilemma, to keep the piece interesting and exciting or impersonate the item that it was suppose to represent, and risk been dreary. I came to a compromise of an average between quick and leisurely, and settled on 90bpm. This helps the piece along whilst at the same time creating the impression of the clock both at the beginning and towards the end.

Specific passages of interest for me are the way in which from a simple ticking sound upon a wood block, other instruments build upon it to create a frenzied exhilarating piece through to the end, where it all dies away again to give us what we started with. Other interesting points are the bars 96 to 109, and the way in which both skilled playing and counting are required, and the unusual amusing way in which the phrase lies upon the page.

After looking back over the piece as it neared completion, I realised that all the instruments within it had a chance to shine through the rest at certain given points, but I felt that the bass line did take too much of a back seat throughout. I developed small sections to provide more interest, which in turn aided the piece as a whole.

This piece works to its best effect when placed in a program of pieces, e.g. my portfolio. A percussion composition breaks up the continuous western harmony and melody concepts and gives the ears a fresh interest. This in turn gives more interest to the following pieces, which are in a style that we are more used to hearing.

Reviews of By The River Bank

Sorry, there's no reviews of this score yet. Please .
In order to submit this score to ScoreExchange.com Jamie Brown has declared that they own the copyright to this work in its entirety or that they have been granted permission from the copyright holder to use their work. If you believe that this score should be not available here because it infringes your or someone elses copyright, please report this score using the copyright abuse form.