By: Jamie Brown
For: Big band
This music is in your basket
View basket
Loading... 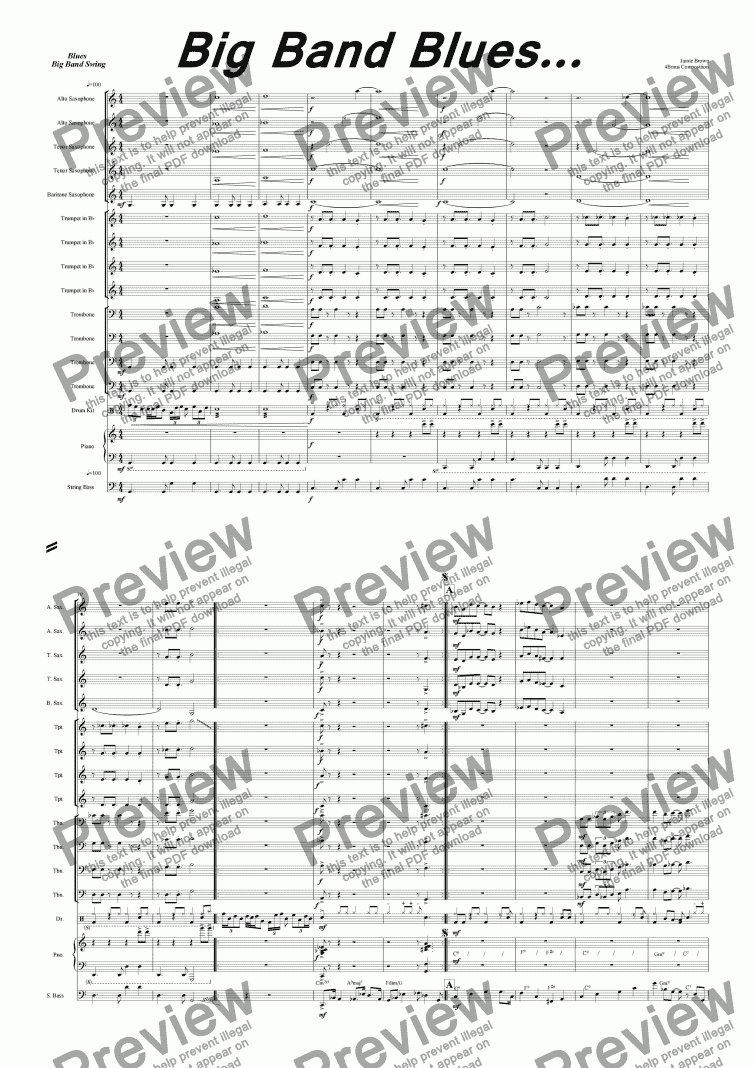 By: Jamie Brown
For: Big band

Composer
Jamie Brown
Year of composition
2005
Lyricist
none
Difficulty
Difficult (Grades 7+)
Duration
7 minutes
Genre
Other
License details
For anything not permitted by the above licence then you should contact the publisher first to obtain permission.

Big Band Blues For my final piece I have decided to take on the mammoth task of writing for a 16-piece big band. Later on in the composition this caused me so many problems, mainly due to the fact that I had not written anything on this scale or length before.

To give me a basis from which to start work, I decided to write using a blues structure. Although normally this can be quite a simple form, with the scale and harmonic proportions I have laid out before me, I felt that it would lend itself to the construction of the piece. With this in mind I chose to keep to the original style of blues with a tempo just faster than walking pace of 100bpm.

The key in which the piece was written was dictated more by the instruments than choice. An immense amount of care and time was going to be needed to create this big band piece. I therefore decided to leave it in the key of C, which for the brass would turn into Bb and Eb.

The influences for this piece are based on the fact that I really enjoy listening to big band music, and like the possibilities that sectional groups of instruments open up.

The piece also gives me a chance to demonstrate the jazz based skills that I have acquired, and also look at soloing. All the techniques I have collated over the past four years and a few new ones produced by research have been used within this piece, for instance chordal building between instruments.

The dynamics throughout the piece have to be well balanced and thought out due to the number of instruments playing at once. The instruments require dynamics at varied levels, building up textures, to create interest throughout the piece. The most interesting dynamic use for me is towards the end, where we have the dynamic marking of fp then crescendo to fff. This kind of swell, in and out, is of classic big band style.

The structure of the piece is created by an intro, A, A, B, C, Solos, Coda, so it keeps a fairly simple form. I particularly enjoyed creating the coda, and the chords and harmony that were applied there.

Harmonically the piece is full, using 4-part close, unison, broken stacked chords, and rhythmical development chords. Even some 5-part harmony creeps in, on occasions. Over all I was extremely happy with the sound and the way the brass stabs in, and the leads in and out between the sections.

Melodically the piece isn�t too adventurous. Although pleasant on the ear, it doesn�t push the contemporary boundaries that perhaps it could have, but in its defence the harmonic values more than compensate for this. I also attempted to create jazz solos across a variety of instruments, and as this isn�t my forte I was quite pleased with the results achieved.

The piece starts off with 3 bars that sound like they are from a Broadway overture, and they were added as an afterthought as the composition neared its completion. This is followed by a demonstration of pedal point on two scale degrees.

Another interesting feature of the piece for me personally was the drum kit part, which I found challenging and time consuming. Not being a drummer I found this extremely difficult and needing further research. I needed to learn more about drum notation within a compositional context. I included fills, small solos, and snare phrasing to suit the band, the style of the piece, and to add interest within the drummer’s part. I also included the open and closed hi hat notated at specific places for the drummer.

In bar 52 I have marked on the brass parts to play with mutes. These were also used later on in the composition to gain a new sound and variance and harmonic stabs. I also made use of bracketed notes upon the piano solo repeat section in bar 63.

Other techniques that I applied were brass fall offs, where a note is played and a succession of rapidly descending notes follow it. This is used to great effect on the last note on the 1st trumpet part.

Sorry, there's no reviews of this score yet. Please .
In order to submit this score to ScoreExchange.com Jamie Brown has declared that they own the copyright to this work in its entirety or that they have been granted permission from the copyright holder to use their work. If you believe that this score should be not available here because it infringes your or someone elses copyright, please report this score using the copyright abuse form.