Sign in / Register
HomeInstrumentationsDuetBLAVET SONATA FOR 2 FLUTES OPUS 1 No. 2 IN A MINOR

BLAVET SONATA FOR 2 FLUTES OPUS 1 No. 2 IN A MINOR 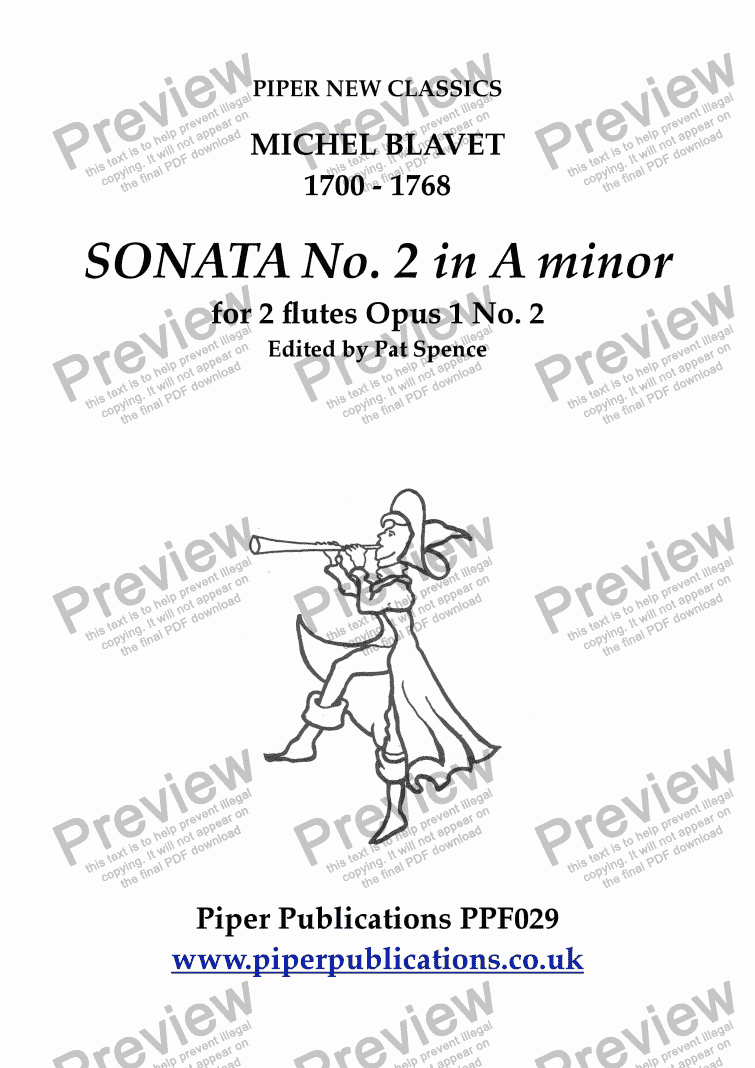 Editor’s notes This sonata ‘Pour deux Flutes transversieres sans Basse’ is the secondof a set of six published by Boivin in Paris in 1728 as Blavet’s ‘Premier Oeuvre’. They were dedicated ‘a Son Altesse Serenissime Monsieigneur LE PRINCE DE CARIGNAN Par Mr. Blavet ordinaire de la musique de S. A. S.’ on the suitably elaborate title page. The sonatas were printed using the soprano G clef which places the G on the bottom line of the treble staff, a practice which was not uncommon at the time. Blavet was not only the best flautist in France but also an extremely good bassoon player so would have found this clef easier to read from as he was not a keyboard player. This edition has been transcribed to the now established treble clef with G on the second line. Trills shown in the original as + are shown in this edition as tr. In this sonata Blavet used a mordent instead of a trill on the shortest notes and that has been retained.. Editorial slurs are shown with dashed lines and accidentals in parentheses ( ). Curiously Blavet used a flat (b) to cancel a sharp instead of a natural even when the sharp was only an accidental. These are shown as naturals. The sonata will be enjoyed by players of equal ability or pupil and teacher and are ideal material to develop independent part playing.

In order to submit this score to ScoreExchange.com Piper Publications has declared that they own the copyright to this work in its entirety or that they have been granted permission from the copyright holder to use their work. If you believe that this score should be not available here because it infringes your or someone elses copyright, please report this score using the copyright abuse form.

Reviews of BLAVET SONATA FOR 2 FLUTES OPUS 1 No. 2 IN A MINOR