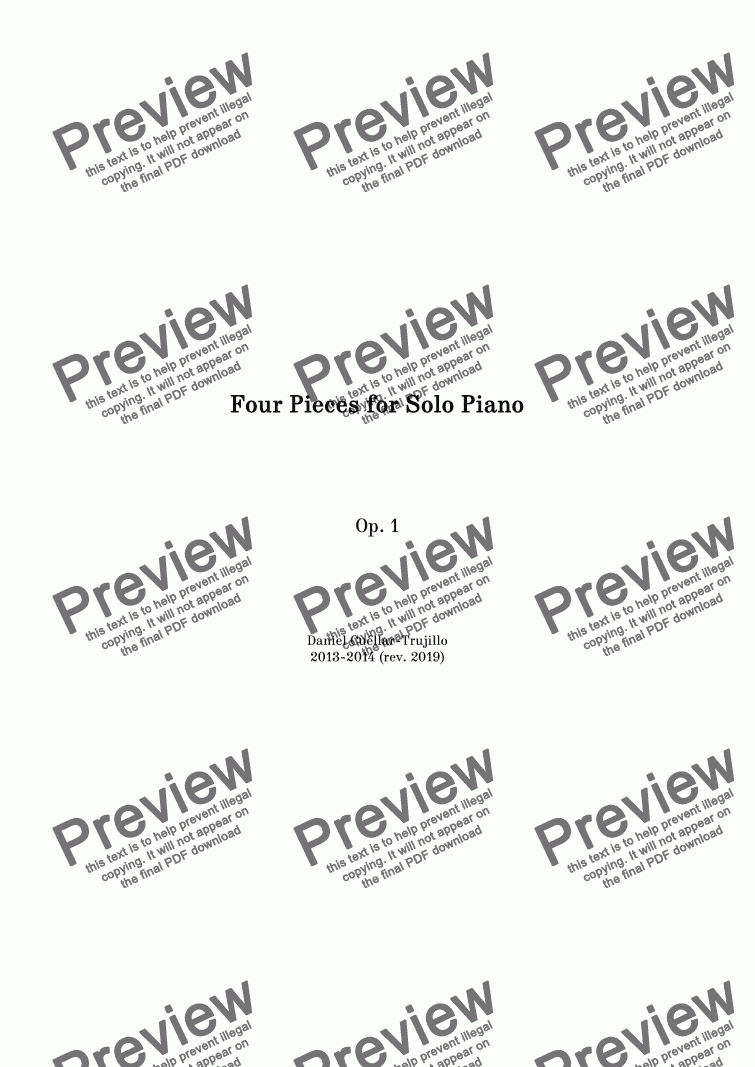 This first opus is made up of four separate piano pieces. These pieces were not conceived as a unity; however, they present some musical elements in common. They all employ a simple tonal/modal harmonic language. They demand some degree of technical virtuosity from the performer, and they present a great deal of textural saturation, particularly in the lower register.

The first piece, Phrygian Rhapsody, consists on an exploration of the harmonic possibilities of the Phrygian mode and the Mixolydian mode. The Phrygian theme is accompanied with dark, saturated sounds. The Mixolydian theme uses both the highest and the lowest registers, and, although it also exhibits some degree of textural saturation, it achieves a much brighter effect.

The second piece, Rain, is built upon a harmonic progression that exploits the parallel fifths instead of avoiding them. The initial musical ideas would undergo further development procedures, resulting in a piece that is somewhat reminiscent of Celtic music.

The third piece, Noel, imitates the romantic style of Chopin’s nocturnes. Some sections are built upon modal centres that set slightly apart from the traditional major and minor modes. The choice of writing a piece with complex tonal and harmonic structures, and with rhythmic irregularities, was part of the original idea of challenging the performer’s score-reading and performance abilities.

The fourth piece, Ionian Fantasy, was conceived as a sonata form. However, the overall development exceeded the traditional restraints of such musical form. Out of the sections that were meant to serve as connections between the main thematic groups, new themes appeared. Therefore, the piece transformed into some sort of fantasy with free thematic structure. The reference to the Ionian mode, instead of the major mode, suggests that this piece also carries out an exploration of modal scalar systems that enrich the traditional major and minor scales.