Sign in / Register
HomeInstrumentationsBrass quintetVariations on an Original Theme, Op. 2

Variations on an Original Theme, Op. 2 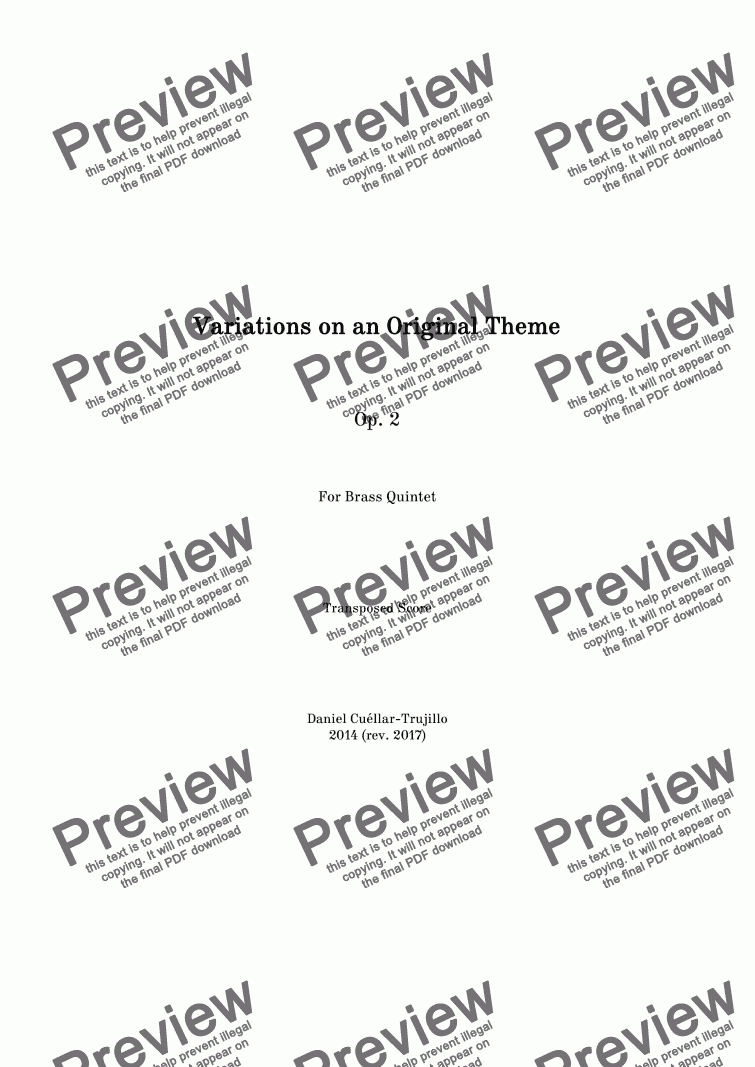 This piece consists on a series of variations in a tonal/modal harmonic language. It explores different simple rhythmic and harmonic concepts, along with atmospheres and textures inspired in a rather romantic style, to create a composition that is pleasant both to the audience and to the performers, although it demands some degree of virtuosity from the players. The main theme is bright, energic, in a fanfare style. It recalls the concert band music of North American tradition, with harmonic, rhythmic and melodic gestures full of energy and jollity. The first variation’s metre changes to a ternary beat, and it explores the harmonic possibilities of keeping a pedal note during most of the section’s length. The second variation is based upon the concept of number five, both from a rhythmic standpoint (time signature of 5/4, and quintuplets) and from a harmonic standpoint (pentatonic scales). The third variation poses a three-beat dance rhythm, and, instead of literally repeating the music corresponding to the theme’s first part, the whole section is written down again; this written repetition adds fast upward figurations of triplets and quintuplets. The fourth variation evokes a march in a style that could be associated with Gypsy or Eastern European music. The theme is transformed with a time signature of 7/4 and scales with augmented seconds (that create a somewhat “Arabic” character). The fifth variation presents a version in the minor mode, with a ternary rhythm. The repetition of the first section is also written down in this variation, and it introduces an increasingly complex rhythmic pattern of repeated notes in the trumpets. The sixth variation serves as a connection with the last section of the piece, and it explores quartal harmonies, emulating the style of North American brass ensembles. The seventh and last variation begins with a brief introduction based on a call da lontano, quite recurring in the brass parts of many compositions of the universal repertoire. The variation itself consists on a harmonization of the theme, without any repetitions, in which the original melody undergoes a rhythmic augmentation, so that each note lasts for an entire bar.

Reviews of Variations on an Original Theme, Op. 2