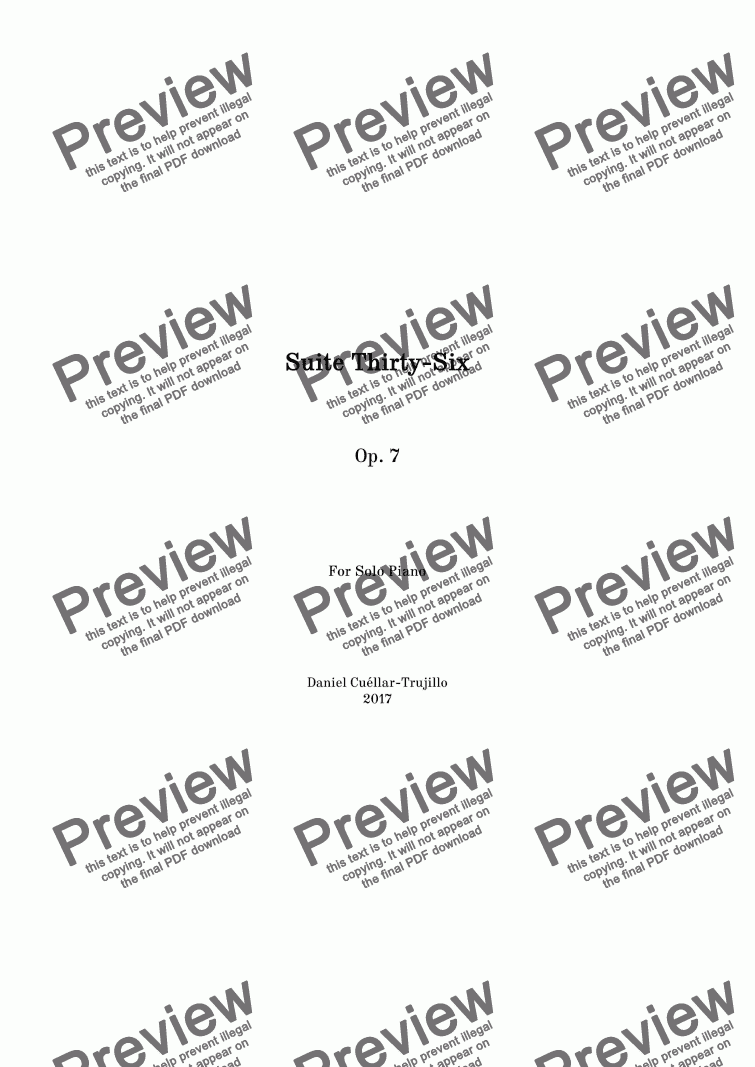 This is a dodecaphonic and free-serial piece. Its numerical title doesn’t refer to similar suites composed previously, but to the fact that it's based on three twelve-note series. The first series is based on perfect fourth and major second intervals, and it’s organized into four consecutive three-note blocks. The second series is a connection between the first one and the third one, and it’s divided into three four-note blocks. The third series increases the overall dissonance, as it’s based on minor second intervals.

The Suite is organized into seven movements. The concept of “mirror” is essential from a structural standpoint. The four Promenades present similar textural ideas. The first one carries out a free serial treatment of the first series, with repeated chordal blocks and fragmented melodic lines. Canons 1 and 2 are based on a strict dodecaphonic contrapuntal treatment of the second series. They are mutual reversed mirrors: the second Canon is an exact retrograded version of the first one. Promenades 2 and 3 employ the second and the third series to develop some textural ideas of the first movement. These are mutual indirect mirrors, as, although they aren’t based on retrogradations, they both have the same structural design, rhythm, articulations, dynamics, and texture, only differing in the actual pitches that are coded according to their respective twelve-tone series. The Minuet uses the third series in a strictly dodecaphonic style. The Trio section explores the piano’s upper register, and it uses the three series at the same time, in a three-part contrapuntal texture. It represents the piece’s climax, exhibiting a much more limpid texture whilst presenting a higher conceptual density.

The last Promenade develops all the material presented in previous movements, based on the three series. The final climax, composed with series one and two, creates a fictional effect of tonal stability, but this is due to the intervallic setup of those series, and to their common harmonic structures. Just as Canons 1 and 2 were retrograded mirrors, and Promenades 2 and 3 are mutual “reflections”, this last Promenade is indirectly related to the first Promenade’s form and texture. The “mirror” is evident in the way the whole piece is organized: the first movement is related to the last one; the second one to the penultimate one; the third one to the antepenultimate one. Finally, the fourth movement also has a mirrored structure (ABA), where the Trio section constitutes the Suite’s centre.