Sign in / Register
HomeInstrumentationsSolo instrumentSonata Hymnica No 2 for Piano Solo

Sonata Hymnica No 2 for Piano Solo 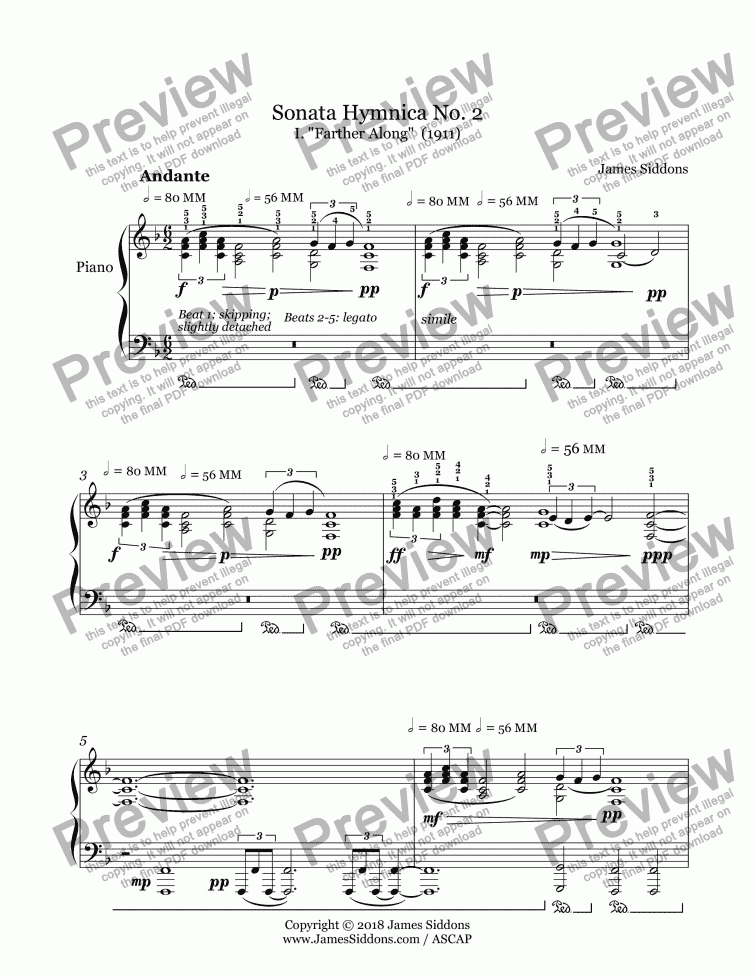 About the Sonata Hymnica Series

Program Note: Composer James Siddons draws on the ethos of American rural hymns and spirituals to create evocations of the deeper, larger meaning of familiar church melodies. These sonatas for piano solo explore these deeper meanings in a variety of contemporary musical influences, while keeping in mind the acoustics of small rural churches of the late nineteenth century, with wooden floors and walls, high ceilings, and dimensions determined by local builders who knew how to shape a room for excellent acoustics in an age of no electricity and no microphones. These sonatas are but partly about the specific melodies and words, and mostly about their meaning in spiritual contemplation . . . and the piano, resonating, reverberant, sometimes whispering–-as a sacred harp. Although these sonatas have no specific titles, the first sonata may be thought of as the Prayer Sonata, the second as the Travel Sonata, as in a spiritual journey, and the third sonata is about our greatest fear, that of being alone and without God. Sonata Hymnica No. 2 draws on two melodies from the second decade of the 20th century. One, “Farther Along,” was first published in 1911 but seems to have existed earlier as a folk hymn. “Ivory Palaces” (1915) was written in London for singing in revival meetings, but soon found favor in American rural churches. Sonata Hymnica No. 2 concludes with an Epilogue on “Lord, I’m Coming Home” (1892) in homophonic hymn texture, to be played slowly and sonorously.

Performance Note: The pianist must keep in mind that these sonatas are about playing the piano as much as playing a composition. Musical effects characteristic of the piano and descriptive of the memory in American culture are the substances of these piano solos. Touch is important: in many places, several dynamics are called for on the same beat. All three pedals on an American piano (damper, sostenuto, and sustain) are needed. The orchestral and cinematic structure of this music requires extensive use of three staffs, which may consist of two treble and one bass staff, or one treble and two bass staffs. In basic grand-staff passages, the two staffs may both be treble or both bass. The musical influences in these sonatas include religious song in rural America, the chromaticism and Expressionism of Arnold Schoenberg and his followers, and the tone colors of the music of Japanese composer Toru Takemitsu.

About the Composer: Composer, musicologist, and pianist James Siddons studied composition with Dika Newlin, a protégé of Arnold Schoenberg, and electronic music with Merrill Ellis, founder of the electronic music program at the University of North Texas, where he also earned a PhD in musicology. After a year at the University of London, where he studied musical analysis at King’s College and electronic music at Goldsmiths’ College, Siddons spent two years in Japan as a research scholar at Tokyo University of Arts, participating in the Ethnomusicology Seminar of Fumio Koizumi. Siddons has also studied theology and liturgy at the Duke University Divinity School. In addition to books and articles on contemporary music and music in Japan, Siddons was written compositions in many genres. Recordings of his piano performances are available at online streaming services.

In order to submit this score to ScoreExchange.com James Siddons has declared that they own the copyright to this work in its entirety or that they have been granted permission from the copyright holder to use their work. If you believe that this score should be not available here because it infringes your or someone elses copyright, please report this score using the copyright abuse form. Reviews of Sonata Hymnica No 2 for Piano Solo