By: Camille Saint-Saens
For: Large mixed ensemble
This music is in your basket
View basket
Loading... 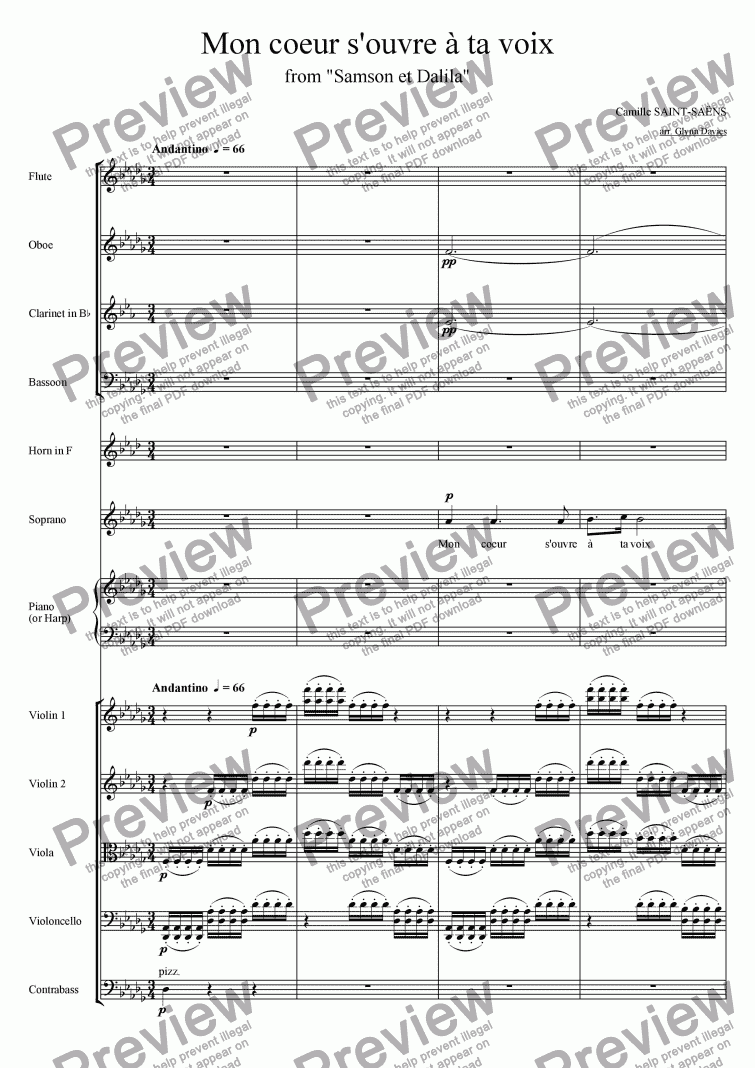 Even though Camille Saint-Sa�ns composed a dozen operas, his only work of this genre to have survived the stage is Samson et Dalila (1868-75). If not for his close and influential friendship with Liszt, the composition may never have been completed. Even though his chamber works and symphonies attracted considerable attention, more assured musical glory existed in the theater. This stimulated him enough to initiate efforts on what later became his best-known opera, Samson et Dalila.

Saint-Sa�ns first gained interest in the account of Samson and Delilah when he heard that Rameau's opera, based on Voltaire's libretto of the topic, had failed. Working with his librettist, Creole Ferdinand Lemaire, Saint-Sa�ns immediately began to work the subject into an oratorio. Under the influence of Lemaire, the composer changed directions and scored it as an opera, beginning with, for no apparent reason, the second act. Viewed as a sacrilegious transformation of biblical scripture, commercial theater managers avoided it as box-office poison. Upon hearing mention of the project, with his usual perspicacity Liszt saw the value of the work and, comfortably backed by the Grand Duke at Weimar, encouraged its completion and promised to have it performed. The outbreak of the Franco-Prussian war thwarted the timely completion of the project; thus, it required a total of eight years to finish. When a portion of the opera was heard on Good Friday 1875, in the Th��tre du Ch�telet, the reaction was quite discouraging; nevertheless, it received a full premiere in 1877 at the Grand Ducal Theatre in Weimar, just as Liszt had assured. From there it had its French premiere at the Paris Op�ra in 1892, where it was staged 500 times more prior to the composer's death, becoming comparable in success with Faust and Rigoletto.

Even though Saint-Sa�ns was considerably influenced by masters of the operas such as Wagner, Handel, Offenbach, Gounod, and Meyerbeer, none of his other operas came close to achieving the level of fame and prestige experienced by Samson et Dalila, perhaps due to the composer's lack of theatrical abilities. Attracted to the purity of music, he refused to recognize the emotional and sensual possibilities in his work. Samson et Dalila, which was actually more of a series of tableaux than an opera, had room to avoid these indulgences by nature of its biblical subject matter; however, his other works of this genre, in the eyes of critics, did not. The work is a synthesis of Wagnerian drama and French and Italian operatic forms, containing skillful structures and eloquent melodies. As one of the brightest jewels of French opera, the work is considered "a dream of antique purity and modern orchestral experimentation," which thoroughly demonstrates Saint-Sa�ns' compositional capabilities.

This arrangement is for solo Soprano and small chamber enssemble.