Sign in / Register
HomeInstrumentationsLarge mixed ensembleLargo al factotum, from "The Barber of Seville"

Largo al factotum, from "The Barber of Seville"

By: Gioacchino Rossini
For: Large mixed ensemble
This music is in your basket
View basket
Loading... 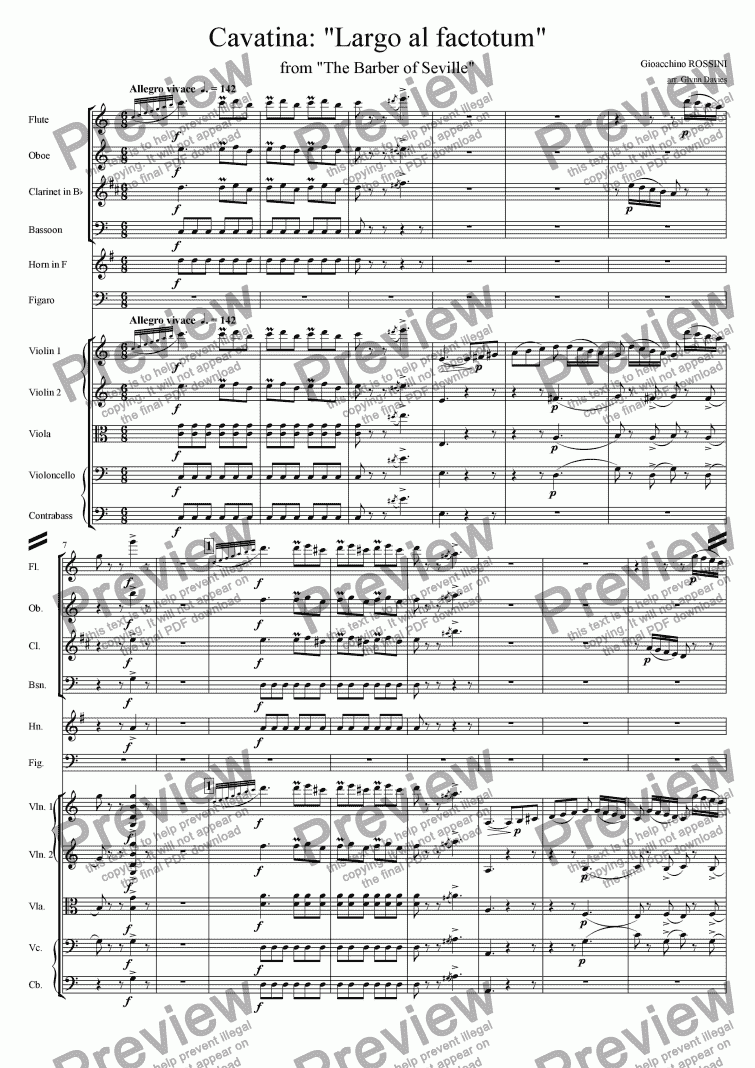 Largo al factotum, from "The Barber of Seville"

Composer
Gioacchino Rossini
Year of composition
1816
Arranger
Glynn Davies
Lyricist
anon.
Difficulty
Difficult (Grades 7+)
Duration
4 minutes
Genre
Classical music
License details
For anything not permitted by the above licence then you should contact the publisher first to obtain permission.

This 1815 masterpiece is widely considered the greatest of comic operas. Even when operas of the bel canto period (Rossini's period of flourishing) were rarely performed, its frequent presence on operatic stages of the world was unabated. The first performance, in Rome in 1816 was a fiasco. The older opera composer Giovanni Paisiello had composed an opera on the same story, also called The Barber of Seville, in 1782. Rossini had misgivings about composing a new opera on the same text, so he first obtained Paisiello's gracious permission to go ahead, and originally called his new opera Almaviva. This did not prevent Paisiello's claque from sabotaging the premiere, a feat in which they were aided by under-rehearsal, sloppy production, and stage effects which failed to work properly. Soon afterward, with some changes, the opera was presented again. Without Paisiello's fans creating an uproar, the performance was a success, and by the third performance it resulted in ovations and quickly went on to sweep the operatic world. (As for Paisiello's opera, it was soon eclipsed by Rossini's, but more recently it has regained some appreciation in the operatic world.)

The Barber of Seville is the first of a trilogy of plays by the French dramatist Beaumarchais. These plays, which tended to depict nobility as buffoons dependant on and manipulated by their wily servants, were considered subversive in the late 1700s. (The Marriage of Figaro, the second of the plays, was turned into an opera by Mozart in 1786. It is Rossini's opera, by the way, not Mozart's, which has the comic aria "Largo al factotum" containing the call: "Figaro, Figaro, Figaro.") Figaro is the barber of the title. The plot involves the efforts of the amorous young Count Almaviva to woo and win the lovely Rosina, in the process outwitting her ward, Dr. Bartolo, who fancies her for himself. There are textual difference among production of the opera. The primary decision is whether Rosina's part should be sung by a mezzo-soprano (as Rossini originally intended) or by a soprano, as it has commonly been done since 1826, apparently with Rossini's permission. An aria for Bartolo was lost, and has been replaced by one composed by a composer named Romani. And the "Lesson Scene" is also lost, so the soprano gets to choose music by another composer to use in its place. Some of the great popular numbers in the opera are Almaviva's serenade "Ecco ridente in cielo" and the more passionate "Se il mio nome." Rosina's"Una voce poco fa" is probably the most popular of all coloratura arias, while Bartolo gets his own aria, "La Calunnia" ("Calumny"), all about the evil power of slander. Incidentally, the famous overture to the opera, which is probably among the most frequently heard compositions of Rossini's in the concert hall, was not composed originally for this opera at all! Rossini was short of time, so he simply grabbed an overture he had written earlier.

Reviews of Largo al factotum, from "The Barber of Seville"