By: Leo Delibes
For: Large mixed ensemble
This music is in your basket
View basket
Loading... 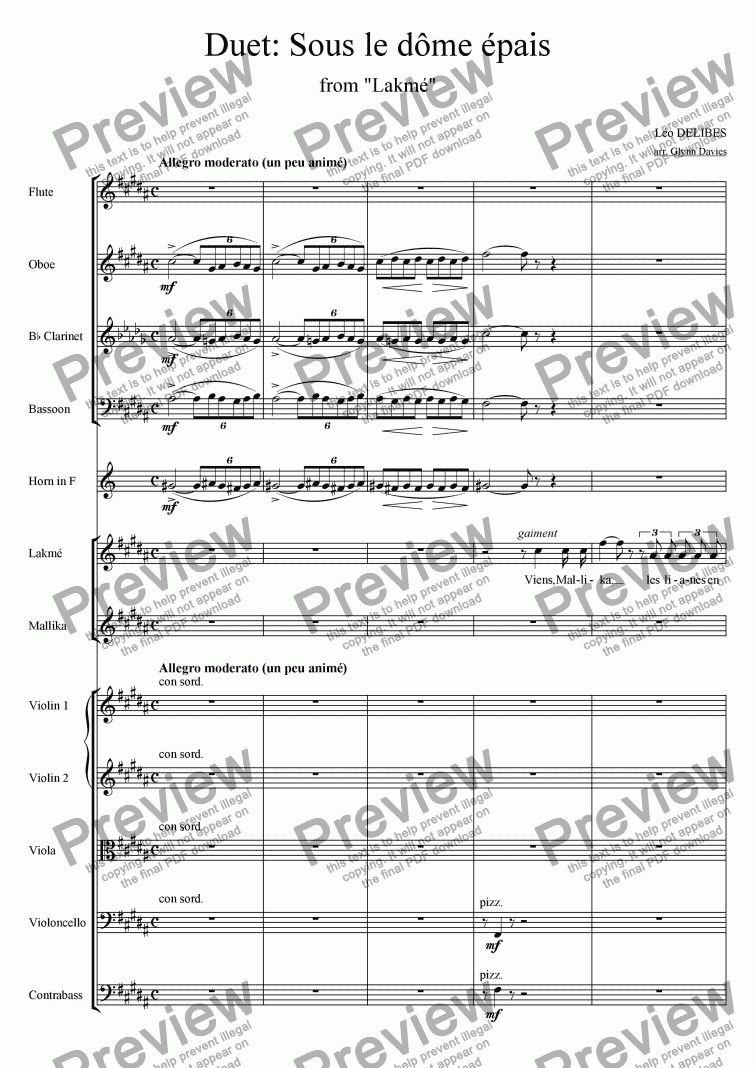 Composer
Leo Delibes
Year of composition
1883
Arranger
Glynn Davies
Lyricist
Edmond Gondinet and Philippe Gille
Difficulty
Moderate (Grades 4-6)
Duration
5 minutes
Genre
Classical music
License details
For anything not permitted by the above licence then you should contact the publisher first to obtain permission.

Lakme is a three-act opera with a libretto by Edmond Gondinet and Philippe Gille. Gondinet thought the subject particularly suited to the soprano voice of Marie van Zandt, a rising young vocal star whom he admired. The subject comes from a novel by Pierre Loti. Delibes composed the music between 1881 and 1882, but the premiere took place the following April 1883 at the Op�ra-Comique of Paris. Typical of its age, the story makes use of an exotic location, Hindu religious rituals, tension and conflict between the natives and the British settlers, and conflicts surrounding the two main lovers, who both have obligations and loyalties that war with their passion for one another. The music is rich and sensuous, with an oriental flavor during the crowd scenes and scenes of religious rites. This oriental flavor defines the ambiance of the story, giving an aural background even where there is no narrative. Meyerbeer's L'Africaine makes similar use of the contrasts between Europeans and "pagans," and also has a love triangle which crosses ethnic boundaries in much the same way. And the subtle colors and harmonies that create this "exotic" world blending European culture with foreign elements were also inspired by Meyerbeer and Bizet. The opera was very well-received by the public and was produced many times at the Op�ra-Comique. It achieved international popularity as well, and all in all is as great a work as Delibes' ballets Sylvia and Coppelia.

Lakm� was based on a novel by Pierre Loti, with strong autobiographical elements inspired by a romance the author experienced while living in Tahiti. Rarahu, the woman involved, eventually died from alcoholism. The basic outline of the story was retained, but Delibes transferred the story to India so that the cultural conflict could be one between the British and the Brahmin Hindus. And instead of alcohol being the cause of his heroine's downfall, Delibes chose as the means of her demise the poetic device of a poisonous flower, the datura (which outside of the operatic stage is not deadly).

The hinge-piece of the opera is the famous "Bell Song" (De la fille du paria). It is sung by Lakm� at the behest of her father, the Brahmin priest Nilakantha. Unbeknownst to her, he intends to use her beauty and beautiful singing to ensnare a trespasser. A British officer named Gerald is one of a group of Englishmen who has trespassed on holy ground despite a warning that this was forbidden on pain of death. He saw Lakm� and fell in love with her instantly, and she with him. Nilakantha observed the last part of their meeting, but fled without being clearly seen.

Delibes' topic suggested musical contrasts between the British and the Eastern characters and locales; it is modal melodies that give the opera its distinctiveness and particular charm. Besides the wonderful "Bell Song," there are various "Oriental" dances and passages intended to depict Hindu ceremonial music. Even though the growth of world-spanning media and field recordings has shown us just how inauthentic this music is, the opera continues to seem exotic in mood. Even though the opera is a fairly rare visitor to the stage outside France, the "Bell Song" has always been popular.

This arrangement is for two solo Sopranos and small chamber ensemble.