Five pieces from the Abdelazer Suite 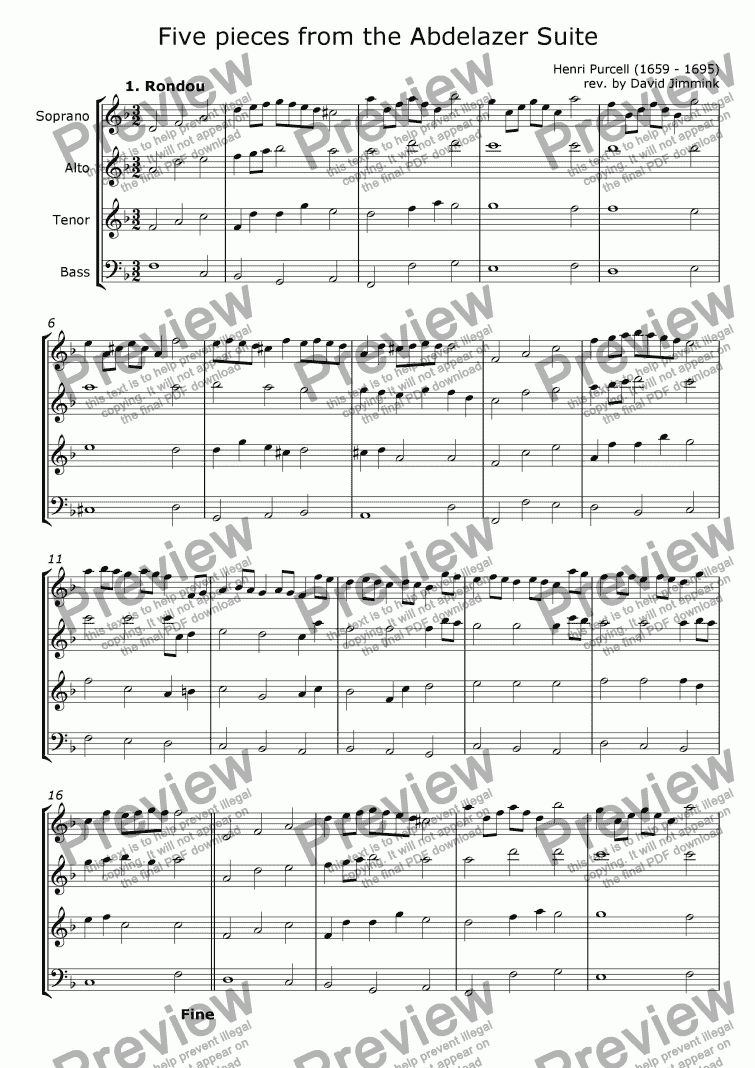 Five pieces from the Henry Purcells Abdelazer suite or "The Moor's Revenge", arranged for four similar instruments, such as recorder or violin.

Some of the plays for which Purcell provided music � and even the identities of some of their authors � have lapsed into obscurity: such was the case with The Gordian Knot Untied, which Orchestra Seattle performed last season. More information survives, however, about the author of Abdelazer (or The Moor's Revenge). Written by Mrs. Aphra Behn (1640-1689), it was first staged in 1676 and published the following year. Purcell provided incidental music for a 1695 revival shortly before his death from tuberculosis at the age of 36.

Aphra Brehn was the first professional woman writer in English and the most prolific dramatist of the Restoration after John Dryden. Abdelazer was her only tragedy; she was more renowned for comedies, her strength being plots that revolved around "forced marriage." Today she is remembered primarily for her pioneering work in prose narrative.

For Abdelazer Purcell provided an overture and eight instrumental pieces, as well as a song, "Lucinda is bewitching fair." Purcell grouped all of these, with the exception of the song, into the instrumental suite heard this afternoon. The suite was one of thirteen he prepared for publication as "Ayres for the Theatre" before his death; the suites were published posthumously in 1697.

By far the longest selection in the suite, the overture features a slow introduction followed by a fast Allegro. The Rondeau that follows has become one of Purcell's most famous tunes due to its appropriation by Benjamin Britten as the theme for his set of symphonic variations known as A Young Person's Guide to the Orchestra.

In order to submit this score to ScoreExchange.com David Jimmink has declared that they own the copyright to this work in its entirety or that they have been granted permission from the copyright holder to use their work. If you believe that this score should be not available here because it infringes your or someone elses copyright, please report this score using the copyright abuse form.

Reviews of Five pieces from the Abdelazer Suite