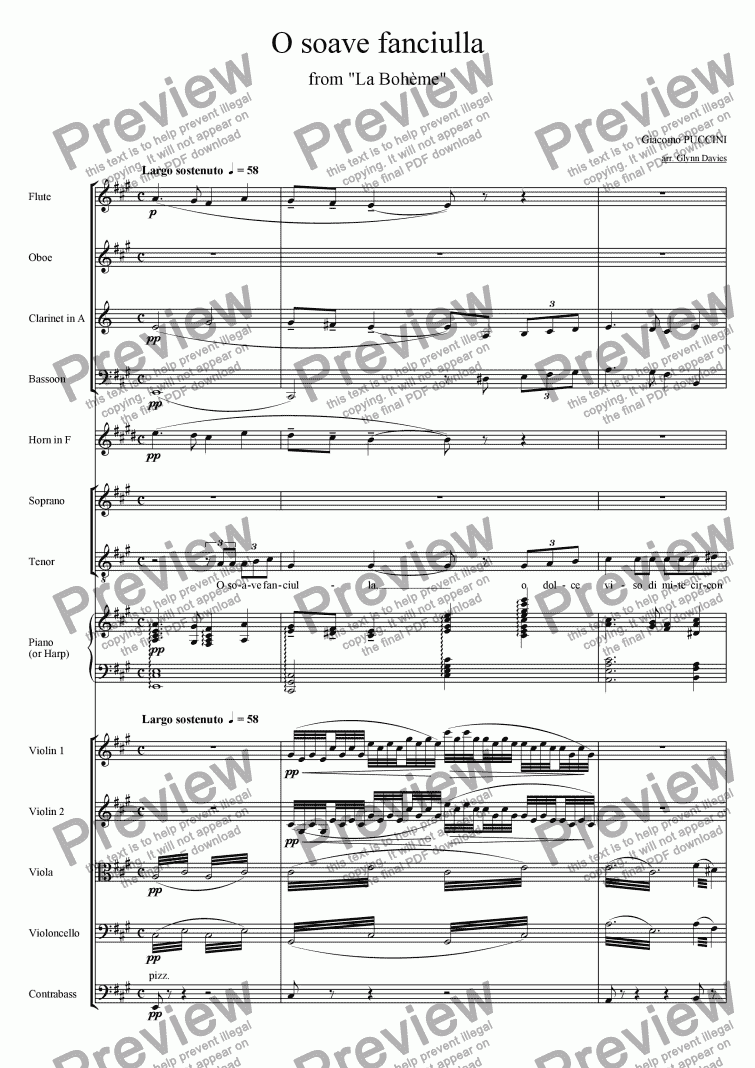 Composer
Giacomo Puccini
Year of composition
1896
Arranger
Glynn Davies
Lyricist
Luigi Illica and Giuseppe Giacosa
Difficulty
Moderate (Grades 4-6)
Duration
4 minutes
Genre
Classical music
License details
For anything not permitted by the above licence then you should contact the publisher first to obtain permission.

It was perhaps a common interest in the nineteenth century cultural fad of Bohemianism that led Giacomo Puccini and his contemporary Ruggiero Leoncavallo to decide to compose operas on the theme of Parisian starving artists. Whatever the initial catalysts, an 1893 meeting of the two composers, in which Puccini casually mentioned his La boh�me project, induced the composers to publish in the Milanese press notices in which each laid a claim of priority to the subject. The validity of Puccini's claim is by no means certain. Nevertheless, although contemporary critics received Puccini's La boh�me coolly after its premiere under Arturo Toscanini in Turin on February 1, 1896, it was a hit with the public, and has endured as a favorite in the operatic repertoire.

La boh�me was the first libretto for Puccini on which Luigi Illica and Giuseppe Giacosa collaborated. By 1893, Puccini was considering composing an opera on Henri Murger's novel Sc�nes de la vie de boh�me. Murger's work, originally published (1845-49) as a series of stories in a French journal, led an intermediary existence as a stage play before being transformed into a novel. Murger's novel enjoyed a favorable reception in Italy shortly after its initial publication and first translation into Italian in 1859.

Some of Puccini's loveliest lyrical moments grace La boh�me. Rodolfo's first aria "Che gelida manina" in Act I, introduces a primarily conjunct melody of touching simplicity, conveying the innocence of pure love. This melody returns at the end of Act I, as Mim� and Rodolfo exit, and again, in Act IV as Mim�, on her deathbed, reminisces with Rodolfo on their first encounter. Puccini's debt to Wagner's leitmotivic procedure is also evident in his association of the music from Mim�'s Act I aria "Mi chiamo Mim�," with Mim� herself, when it accompanies her later entrance in Act III. This technique of associating music with characters incorporates timbral as well as thematic elements. The magical, sustained string instrumentation for the second-inversion D major triad that announces Mim�'s entrance in Act I is also the principal color in the orchestral accompaniment of her signature aria. Classic Puccinian orchestration and harmonic language mark the depiction of daybreak that opens Act III. Here, flutes in parallel fifths peck out a modal melody, punctuated at phrase ends by subtle, sustained upper strings over tremolo cellos. A harp solo adds a delicate brilliance to the sparse orchestral palette and foreshadows the hazy timbre of the off-stage women's chorus. Puccini's expressive use of the orchestra is linked most intimately with the drama in Act IV. After Schaunard tells Marcello of Mim�'s death, the orchestra drops out, leaving only a sustained A in the double bass to convey a sense of dramatic expectation and musical continuity. Even the soloists leave their songful world for one of spoken declamation until the orchestra explodes with C sharp minor triads in the brass, reflecting Rodolfo's realization of Mim�'s death and accompanying his anguished cries.

This arrangement is for solo Soprano and Tenor, with small chamber ensemble.