By: Gaetano Donizetti
For: Large mixed ensemble
This music is in your basket
View basket
Loading... 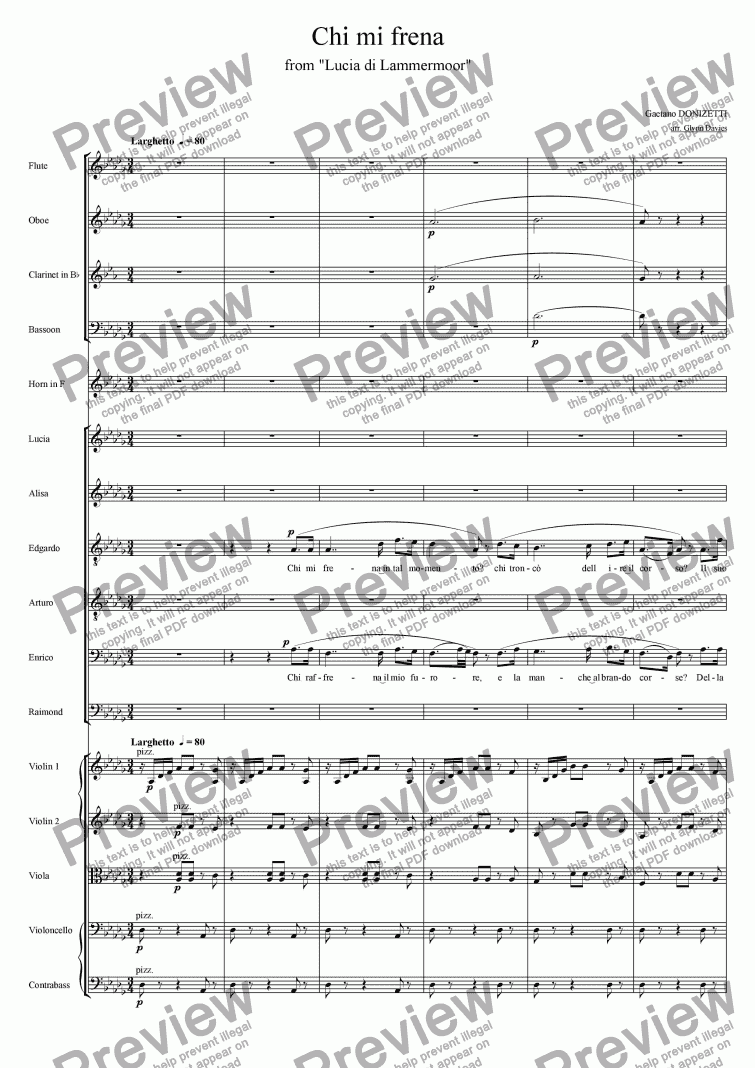 Composer
Gaetano Donizetti
Year of composition
1835
Arranger
Glynn Davies
Lyricist
Salvatore Cammarano
Difficulty
Moderate (Grades 4-6)
Duration
2 minutes
Genre
Classical music
License details
For anything not permitted by the above licence then you should contact the publisher first to obtain permission.

From Sir Walter Scott's melodramatic novel The Bride of Lammermoor, librettist Salvatore Cammarano cobbled together one of the most contrived and ridiculous plots in all of opera. The opera is saved and made great by Donizetti's flood of fabulous music, which includes one of the greatest of all coloratura parts in the title role. It's got blood and thunder, great choruses, the sextet "Chi mi frena," and above all, the celebrated Mad Scene. Scott's novel had already inspired three operatic treatments by the time of this one. Cammarano had not had much work as a librettist previous to his writing of Lucia, but afterwards he and Donizetti became close partners. Lucia di Lammermoor remains one of Donizetti's most popular works.

In the latter part of 1834, Donizetti signed a contract with the Royal Theaters of Naples to compose three operas, the first of which he was to have ready by July of 1835. After a lengthy process, the premiere of Lucia took place on September 26 at the Teatro San Carlo of Naples. The audience gave the opera an almost ecstatic reception. They cheered each of the individual arias during the opera, and Donizetti and all of the cast were called out for repeated ovations.

The music of the opera was composed with the talents and abilities of the original cast in mind. As the lead soprano in the role of Lucia, Donizetti had chosen Fanny Tacchinardi-Persiani, who was known for her technical abilities. She created the role of Lucia during its initial run, and it was for her that Donizetti composed the incredibly difficult mad scene, which is filled with vocal pyrotechnics and fioritura. From the nineteenth to the twenty-first century, this mad scene has been a showcase for sopranos with technical agility. But it is also an eerily dramatic scene, filled with psychological overtones. Many of the tunes are taken from earlier songs in the opera and twisted in order to show Lucia's demented state of mind. The choruses and narrative flow directly into Lucia's recitative and double aria, showing us her vulnerability right before her death. And the Tomb scene for Edgardo follows, with beautiful, dramatic music. With his suicide, the lovers are joined in death.

The other famous piece from Lucia di Lammermoor is the sextet at the end of Act Two. This is the climax to the other two acts, and is one of the most powerful and dramatic moments of the opera. It begins with the entrance of Edgardo, as he enters the castle of the Lammermoor to find the entire Lammermoor clan gathered in honor of Lucia's wedding. The emotional conflict between the various characters ignites into an energetic ensemble piece.

This arrangement is for mixed Vocal sextet and small chamber ensemble.