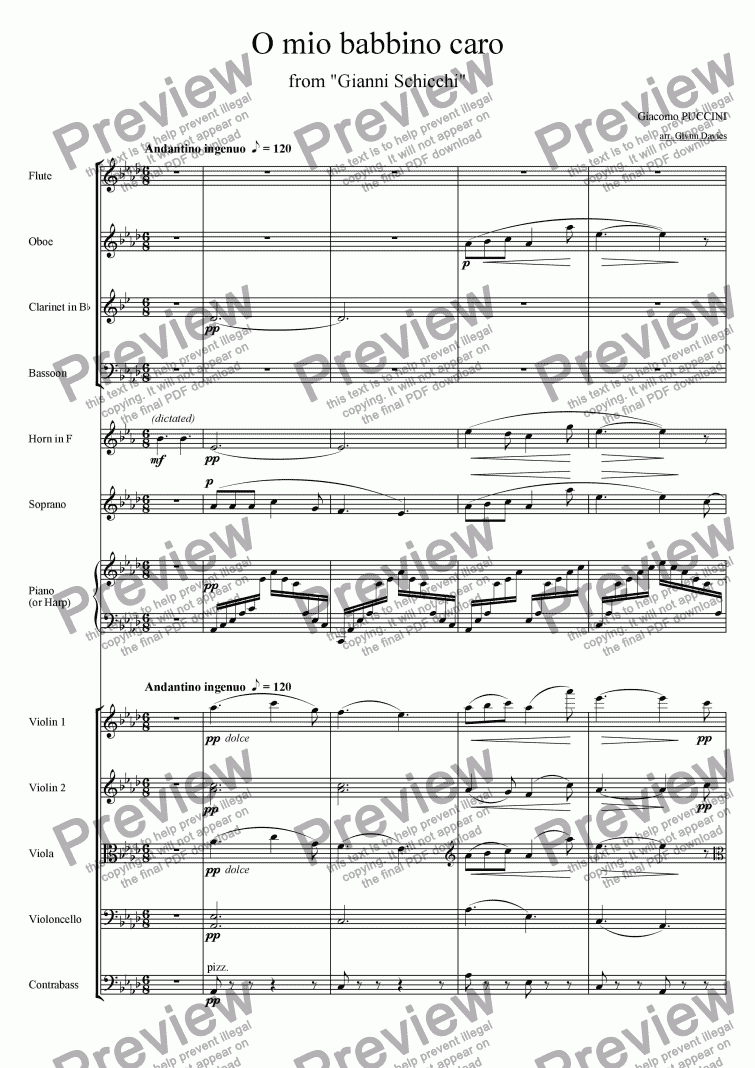 Composer
Giacomo Puccini
Year of composition
1918
Arranger
Glynn Davies
Difficulty
Moderate (Grades 4-6)
Duration
2 minutes
Genre
Classical music
License details
For anything not permitted by the above licence then you should contact the publisher first to obtain permission.

Gianni Schicchi is the third and final installment of Il trittico, Giacomo Puccini's trilogy of one-act operas. Though the trilogy itself is not often performed, Schicchi has remained a perennial favorite � well-loved for its lyrical concision and ensemble humor � and is often cited as a masterpiece of Italian comedy.

The story, which comes from an apparently true-to-life passage in Dante's Inferno, was adapted for the stage by the librettist Giovecchino Forzano. A wealthy miser has died, and the greedy members of his family are horrified to find that he has written all of them out of his will. In a scheme to steal back their inheritance, they enlist the help of the morally ambiguous title character, who then succeeds in bilking them out of the money. A side plot involves the young romance between Schicchi's daughter, Lauretta, and a member of the "grieving" (none of them cared a whit for the old man!) family, Rinuccio.

Puccini's score is notable for its use of recurring themes as organizational devices, and the skillful integration of many different characters' short utterances into larger lyrical structures. Lauretta's aria, "O, mio babbino caro" (Oh, my dearest papa), is among the most famous excerpts in all of opera, and certainly the most anticipated moment in any performance. Other memorable moments include the opening "weeping" scene, in which the exaggerated sobbing of the opportunistic relatives combines with clever orchestral underpinnings; and Schicchi's final-scene impersonation of the dead man, Buoso, during which he re-writes "his" will to suit his own liking.

This arrangement is for solo Soprano and small chamber ensemble. The lyrics have been removed due to copyright restrictions.