Ah! per sempre io ti perdei, from "I Puritani"

By: Vincenzo Bellini
For: Large mixed ensemble
This music is in your basket
View basket
Loading... 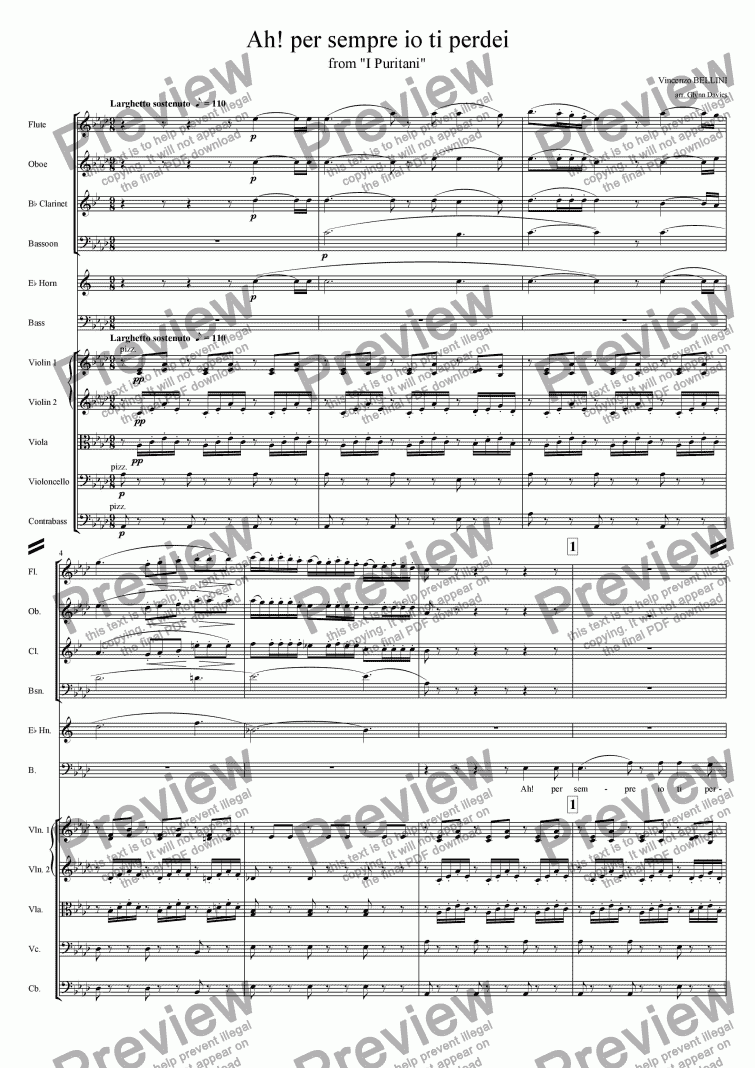 Ah! per sempre io ti perdei, from "I Puritani"

This "melodramma serio" in three acts, with a libretto by Count Carlo Pepoli after the play T�tes Rondes et Cavaliers (Roundheads and Cavaliers) by Ancelot and Xavier, was premiered in Paris at the Th��tre Italien on January 24, 1835. The title was chosen because of the popularity of Scott's novel Old Mortality (1816), titled in French Les puritains d'Ecosse (1817) and in Italian I puritani di Scozia (1825). This popular work broke new ground in its unusual rhythmic phrase lengths, its extended time scale in the Wagnerian manner, its bel canto style that was modified to fit the dramatic action, and its spectacular stage effects and orchestrations. It was Bellini's final opera.

There is no overture, but Bellini creates the perfect atmosphere and foreshadows events to come with a minimum of means � tympani rolls, a long series of sforzando chords, frequent change between parallel major and minor keys � as the sunrise illuminates the courtyard of a fortress near Plymouth with turrets, battlements, and drawbridges in the scene. It is the time of war between the Royalists and the Puritans. Soldiers sing "Arise!" and there are morning prayers. Riccardo (Sir Richard Forth) hopes to marry Elvira, daughter of governor Lord Walton, but she loves Arturo (Lord Arthur Talbot). Bellini's deliberate blurring of closed and open forms is exemplified here when Riccardo's aria expressing grief ("Ah! per sempre io ti perdei") seems to begin earlier in the arioso "O Elvira, o mio sospir."

Elvira learns from her uncle Giorgio (Sir George) that Lord Walton has agreed to let her marry Arturo. Her happiness is expressed in the cabaletta "A quel nome." In the Hall of Arms a chorus welcomes Arturo, whose cavatina turns into a quartet. Walton has a prisoner who discloses to Arturo that she is Queen Henrietta Maria, a Royalist. Arturo disguises her in Elvira's wedding veil and smuggles her out of the castle with Riccardo's secret complicity. The escape is discovered and Arturo is declared a traitor.

Act II presents Elvira's emotional suffering. The chorus "Cinta di fiori e col bel crin disciolto" describes, in 11-syllable lines most often employed in recitatives and some serenades, her "disheveled hair" and "garland of flowers." Riccardo agrees with Giorgio that, out of concern for Elvira, Arturo must be saved. The chorus sings "Suoni la tromba…": "To die in war is glorious, we cry 'liberty'!"…with "lealt�" (loyalty!) and "fedelt�" (fidelity!) substituted in Italy.

In Act III, Arturo is chased through a furious storm but loses the armed men. In a wooded garden near Elvira's rooms, he hears her sing a song he taught her and sings the melody along with her. He explains why he had to flee; Elvira has a relapse at the sound of drums, and her cries bring guards who arrest Arturo. He is saved moments before his execution by Cromwell's declaration of amnesty (announced by a hunting horn). Calls for death from the soldiers are changed to cries of joy for the lovers by the people.

Reviews of Ah! per sempre io ti perdei, from "I Puritani"