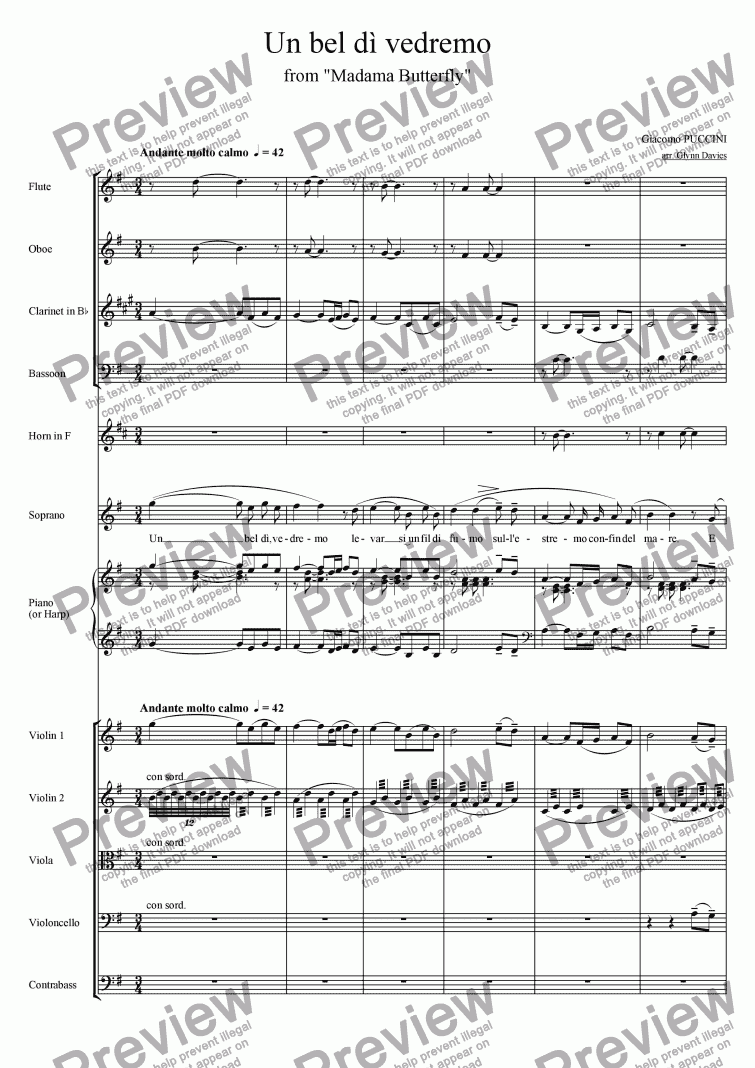 Composer
Giacomo Puccini
Year of composition
1904
Arranger
Glynn Davies
Lyricist
Giuseppe Giacosa and Luigi Illica
Difficulty
Moderate (Grades 4-6)
Duration
4 minutes
Genre
Classical music
License details
For anything not permitted by the above licence then you should contact the publisher first to obtain permission.

Giacomo Puccini furthered his reputation as one of the leading figures in Italian opera of the late nineteenth and early twentieth centuries when he composed one of the world's most popular operas, Madama Butterfly, in 1904. It is on this work, along with La boh�me and Tosca, that his fame rests. Influenced by Verdi, Wagner, Debussy, Leh�r, and Stravinsky, he has been called a Massenet without the urbanity. His ability to master the verismo style, while blending in romanticism and exoticism, is most visible in the plot of Madama Butterfly, a tragic love story set in Japan. The work was written approximately 20 years after his first opera, Le Villi, gained the attention of the publisher Giulio Ricordi. From there Puccini worked with Toscanini, and was introduced, by Ricordi, to the talented librettists Giuseppe Giacosa and Luigi Illica, with whom he worked closely for several years. Together, they produced Manon Lescaut, La boh�me, and Tosca, prior to completing Madama Butterfly.

The inspiration for the plot came from an American play by David Belasco, which captured the composer's immediate interest when he saw it in London. Based on the heartbreak of Madama Butterfly, a 15-year-old Japanese girl, who abandons her people and her religion in a marriage to Pinkerton, a United States Naval Lieutenant, and in a conversion to Christianity, the work undoubtedly had greater meaning to its American audiences following the occupation of U.S. troops in Asia, during the mid- and late twentieth century. In addition to its powerful story line, the solos contained in the opera achieved unprecedented fame. During a three-year wait for her husband's return from the U.S., Madame Butterfly sings what has probably become known as the most popular soprano aria ever written, "Un bel di vedremo" (One day he will come back). Anguished when her husband returns with another wife, Butterfly commits suicide, bringing the opera to a dramatic close.

The original version in two acts was first performed at La Scala, Milan, on February 17, 1904, where it was nearly hissed off the stage, in part because of the excessive length of the second act. Retreating to the country, Puccini recast the work, deleting a song from the first act and dividing the second act into two. The revision was presented at Brescia on May 28, 1904, where it began its long and triumphant career. Shortly thereafter, it was performed in English in Washington, D.C., by Henry W. Savage Company at the Belasco Theatre, on October 15, 1906, and also at the Metropolitan Opera House and Covent Garden.

This arrangement is for solo Soprano and small chamber ensemble.