By: Tradtional Arranged by Keith Terrett
For: Large mixed ensemble
This music is in your basket
View basket
Loading... 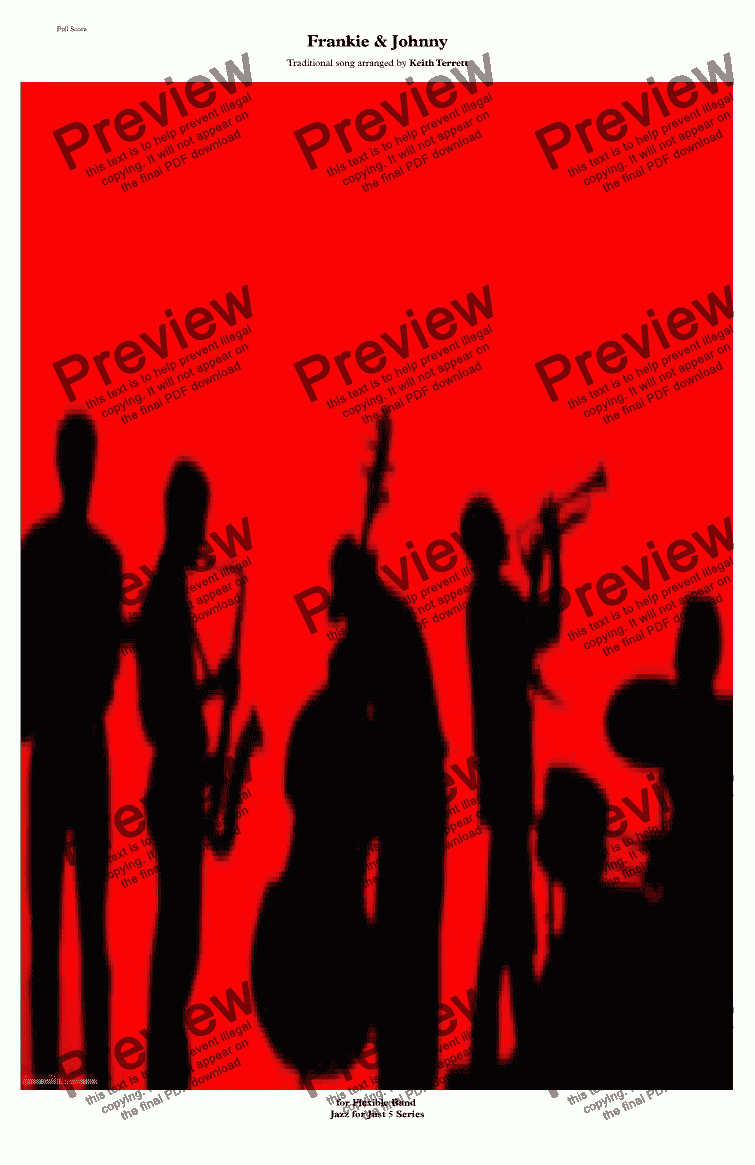 By: Tradtional Arranged by Keith Terrett
For: Large mixed ensemble

Composer
Tradtional Arranged by Keith Terrett
Arranger
Keith Terrett
Year of arrangement
2017
Publisher
Music for all Occasions
Difficulty
Moderate (Grades 4-6)
Duration
3 minutes
Genre
Jazz music
License details
For anything not permitted by the above licence then you should contact the publisher first to obtain permission.

"Frankie and Johnny" arranged for Flexible Band (sometimes spelled "Frankie and Johnnie"; also known as "Frankie and Albert" or just "Frankie") is a traditional American popular song. It tells the story of a woman, Frankie, who finds her man Johnny making love to another woman and shoots him dead. Frankie is then arrested; in some versions of the song she is also executed.

The song was inspired by one or more actual murders. One of these took place in an apartment building located at 212 Targee Street in St. Louis, Missouri, at 2:00 on the morning of October 15, 1899. Frankie Baker (1876 – 1952),[1] a 22-year-old woman, shot her 17-year-old lover Allen (also known as "Albert") Britt in the abdomen. Britt had just returned from a cakewalk at a local dance hall, where he and another woman, Nelly Bly (also known as "Alice Pryor" and no relation to the pioneering reporter who adopted the pseudonym Nellie Bly), had won a prize in a slow-dancing contest. Britt died of his wounds four days later at the City Hospital. On trial, Baker claimed that Britt had attacked her with a knife and that she acted in self-defense; she was acquitted and died in a Portland, Oregon, mental institution in 1952.

In 1899, popular St Louis balladeer Bill Dooley composed "Frankie Killed Allen" shortly after the Baker murder case.[5] The first published version of the music to "Frankie and Johnny" appeared in 1904, credited to and copyrighted by Hughie Cannon, the composer of "Won't You Come Home Bill Bailey"; the piece, a variant version of whose melody is sung today, was titled "He Done Me Wrong" and subtitled "Death of Bill Bailey."