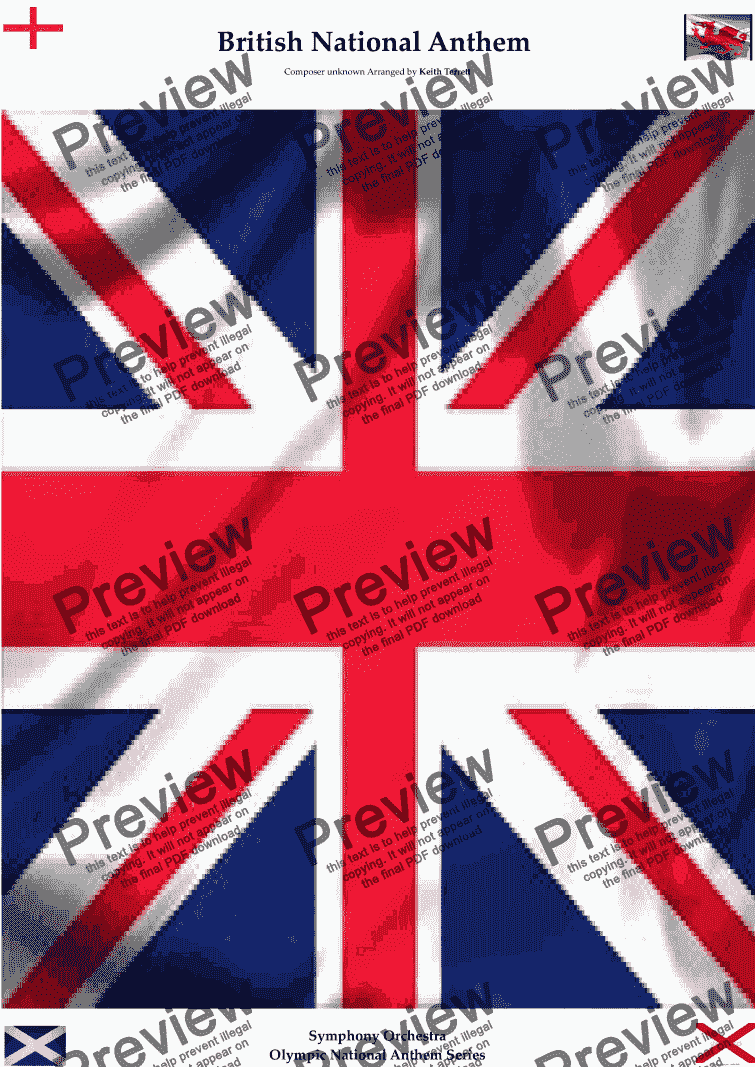 The British National Anthem "God Save the Queen" (alternatively "God Save the King", depending on the gender of the reigning monarch) is the national or royal anthem in a number of Commonwealth realms, their territories, and the British Crown dependencies. The author of the tune is unknown, and it may originate in plainchant; but an attribution to the composer John Bull is sometimes made.

"God Save the Queen" is the national anthem of the United Kingdom and one of two national anthems used by New Zealand since 1977, as well as for several of the UK's territories that have their own additional local anthem. It is also the royal anthem – played specifically in the presence of the monarch – of all the aforementioned countries, as well as Australia (since 1984), Canada (since 1980), Barbados and Tuvalu. In countries not previously part of the British Empire, the tune of "God Save the Queen" has provided the basis for various patriotic songs, though still generally connected with royal ceremony. The melody continues to be used for the national anthem of Liechtenstein, "Oben am jungen Rhein", and the royal anthem of Norway, "Kongesangen". In the United States, the melody is used for the patriotic song "My Country, 'Tis of Thee" (also known as "America").

Beyond its first verse, which is consistent, "God Save the Queen/King" has many historic and extant versions. Since its first publication, different verses have been added and taken away and, even today, different publications include various selections of verses in various orders. In general, only one verse is sung. Sometimes two verses are sung, and on rare occasions, three.

The sovereign and her or his spouse are saluted with the entire composition, while other members of the Royal Family who are entitled to royal salute (such as the Prince of Wales, Duke of Cambridge and Duke of Sussex along with their spouses) receive just the first six bars. The first six bars also form all or part of the Vice Regal Salute in some Commonwealth realms outside the UK (e.g., in Canada, governors general and lieutenant governors at official events are saluted with the first six bars of "God Save the Queen" followed by the first four and last four bars of "O Canada"), as well as the salute given to governors of British overseas territories.

Any anthem in my store is available for the full orchestral treatment, e-mail me for more details:keithterrett@gmail.com

Nice arrangement of a classic anthem!

Would love to hear Keith's arrangements of the world's national anthems used at a future Commonwealth Games or Olympics; they are certainly as good as Peter Breiner's!

I see his store features every anthem of the known world including the Sami, Romani & even an anthem for a language namely ''Espiranto''!