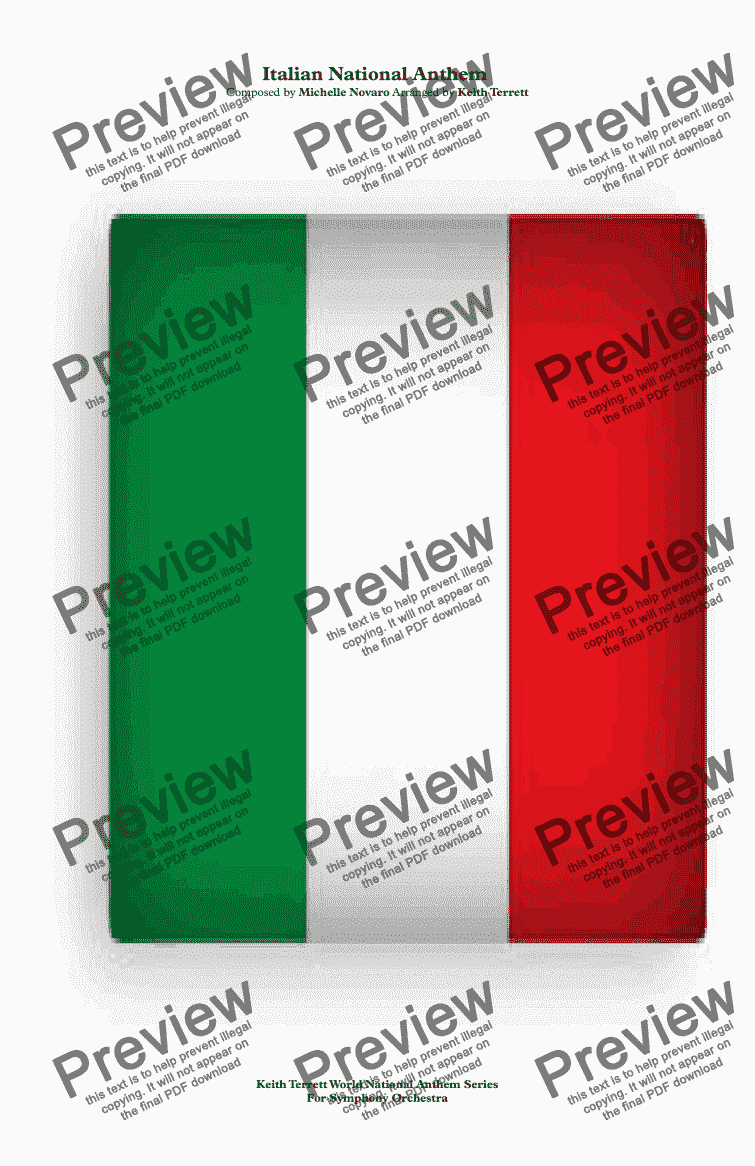 Arranged for full Symphony Orchestra, "Il Canto degli Italiani" "The Song of Italians" or "The Chant of Italians") is the national anthem of Italy. It is best known among Italians as the "Inno di Mameli"/ "Mameli's Hymn"), after the author of the lyrics, or "Fratelli d'Italia" ([fraˈtɛlli diˈtaːlja], "Brothers of Italy"), from its opening line. The words were written in the autumn of 1847 in Genoa, by the then 20-year-old student and patriot Goffredo Mameli. Two months later, they were set to music in Turin by another Genoese, Michele Novaro. The hymn enjoyed widespread popularity throughout the period of the Risorgimento and in the following decades. Nevertheless, after the Italian Unification in 1861, the adopted national anthem was the "Marcia Reale" (Royal March), the official hymn of the House of Savoy composed in 1831 by order of King Charles Albert of Sardinia. After the Second World War, Italy became a republic, and on 12 October 1946, "Il Canto degli Italiani" was provisionally chosen as the country's new national anthem. It was made official on 4 December 2017 de jure.

The first manuscript of the poem, preserved at the Istituto Mazziniano in Genoa, appears in a personal copybook of the poet, where he collected notes, thoughts and other writings. Of uncertain dating, the manuscript reveals anxiety and inspiration at the same time. The poet begins with È sorta dal feretro (It's risen from the bier) then seems to change his mind: leaves some room, begins a new paragraph and writes "Evviva l'Italia, l'Italia s'è desta" ("Hurray Italy, Italy has awakened"). The handwriting appears agitated and frenetic, with numerous spelling errors, among which are "Ilia" for "Italia" and "Ballilla" for "Balilla". The second manuscript is the copy that Goffredo Mameli sent to Michele Novaro for setting to music. It shows a much steadier handwriting, fixes misspellings, and has a significant modification: the incipit is "Fratelli d'Italia". This copy is in the Museo del Risorgimento in Turin. The hymn was also printed on leaflets in Genoa, by the printing office Casamara. The Istituto Mazziniano has a copy of these, with hand annotations by Mameli himself. This sheet, subsequent to the two manuscripts, lacks the last strophe ("Son giunchi che piegano…") for fear of censorship. These leaflets were to be distributed at the 10 December demonstration, in Genoa. 10 December 1847 was an historical day for Italy: the demonstration was officially dedicated to the 101st anniversary of the popular rebellion which led to the expulsion of the Austrian powers from the city; in fact it was an excuse to protest against foreign occupations in Italy and induce Carlo Alberto to embrace the Italian cause of liberty. In this occasion the tricolor flag was shown and Mameli's hymn was publicly sung for the first time. After 10 December the hymn spread all over the Italian peninsula, brought by the same patriots that participated in the Genoa demonstration. In the 1848, Mameli's hymn was very popular among the Italian people and it was commonly sung during demonstrations, protests and revolts as a symbol of the Italian Unification in most parts of Italy. In the Five Days of Milan, the rebels sang the Song of the Italians during clashes against the Austrian Empire. In the 1860, the corps of volunteers led by Giuseppe Garibaldi used to sing the hymn in the battles against the Bourbons in Sicily and Southern Italy. Giuseppe Verdi, in his "Inno delle nazioni" (Hymn of the nations), composed for the London International Exhibition of 1862, chose "Il Canto degli Italiani" to represent Italy, putting it beside "God Save the Queen" and "La Marseillaise". On 20 September 1870, in the last part of the Italian Risorgimento, the Capture of Rome was characterised by the people who sang Mameli's hymn played by the Bersaglieri marching band although the Kingdom of Italy had adopted the "Marcia Reale" as national anthem in 1861.

During the period of Italian Fascism, the "Song of the Italians" continued to play an important role as patriotic hymn along with several popular fascist songs. After the armistice of Cassibile, Mameli's hymn was curiously sung by both the Italian partisans and the people who supported the Italian Social Republic (fascists).

After the Second World War, following the birth of the Italian Republic, the "Song of the Italians" was de facto adopted as national anthem. On 23 November 2012, this choice was made official in law. In August 2016, in the wake of this measure, a bill was submitted to the Constitutional Affairs Committee of the Chamber of Deputies to make the "Canto degli Italiani" an official hymn of the Italian Republic. In July 2017 the committee approved this bill. On 15 December 2017, the publication in the Gazzetta Ufficiale of the law nº 181 of 4 December 2017, which came into force on 30 December 2017.

The music of the anthem was composed by Michele Novaro. Novaro was born on 23 December 1818 in Genoa, where he studied composition and singing. On 23 November 1847, Mameli arrived in Turin and asked his friend Novaro to set the lyrics of the anthem to music. Novaro completed the composition overnight and Mameli was able to return to Genoa the very next day with the completed anthem. The tune helped the anthem spread quickly throughout the nation, and was sung in defiance of the Austrian, Bourbon, and Papal police. Novaro was a convinced liberal and offered his compositional talents to the unification cause without deriving any personal benefits. He died poor on 21 October 1885, after a life riddled with financial and health difficulties.[

The anthem is set in the key of B flat major and at an allegro marziale tempo. The beginning of the anthem is characterised by twelve measures of instrumental eighth notes and sixteenth notes played fortissimo, or “very loud”. The vocals begin in the thirteenth measure, and are sung forte. The rhythms present in the anthem are mostly dotted eighth notes, quarter notes, and sixteenth notes. The rhythm is straight, with little syncopation. Essentially, the beat is on the first note of each measure, and the timing is regular. The rhythm in combination with the tempo gives an especially march-like feel to the composition.

Any anthem in my store can be arrange for full orchestra on request:keithterrett@mail.com 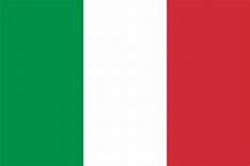