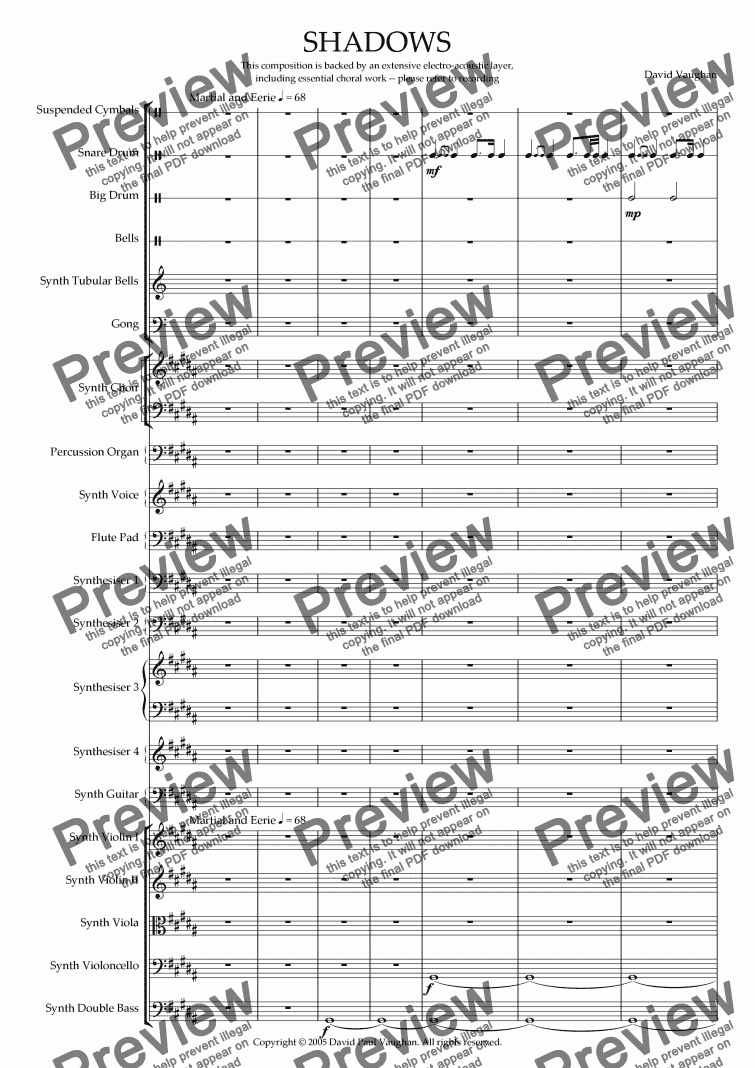 Composer
David Vaughan
Year of composition
2005
Lyricist
none
Difficulty
Difficult (Grades 7+)
Duration
5 minutes
Genre
Classical music and Modern classical music
License details
For anything not permitted by the above licence then you should contact the publisher first to obtain permission.

This score is expected to be used as a visual reference as accompaniment to the mp3 recording above, specifically because the recording uses many synthetic instruments and electro-acoustic recorded effects that do not render correctly or at all through MIDI. To listen to this score without the recording is doing yourself a disservice.

These are the main characteristics of this shadowy alliance of dark magic users. Far from being a single race of beings, the Shadow Alliance was formed millennia ago by human and high elven magi, cast out from the civilised world for to their fascination and obsession with delving into the shadow arts, in their obsessive thirst for arcane knowledge.

Threatened by the potential danger posed by this dark coalition, the high elven magi of Silvermoon engaged the Shadow Alliance in battle, beating them back, and driving them into the far reaches of the forestlands. The elven forces were able to push the Shadow Alliance forces all the way to the Dark Citadel, but the final resistance was far too powerful to defeat, and the fortress too well protected to assault. Caught in a stalemate, the elves wove powerful enchantments on the Shadow Alliance capital, banishing them from the material world. And so the Shadow Alliance were unable to threaten the lands of Quel'Thalas any further.

Millennia passed, and in this time the Shadow Alliance forces waited in the shadows, enlisting the support of various non-corporeal ghostly denizens of the shadow planes. There they waited, lurking in the shadows of existence, anticipating the fated day of their return, when they would walk once more upon the material world. When the time of wrath, of pain, death and long-planned vengeance will be at hand.