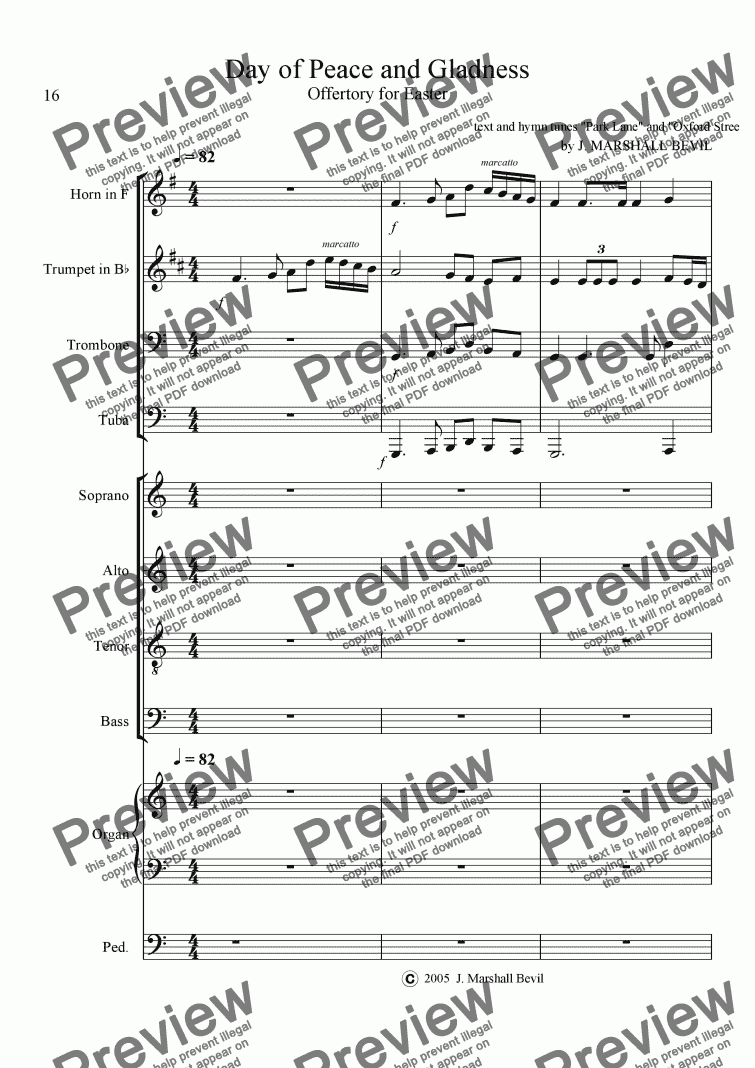 "Day of Peace and Gladness" is a festive hymn concertato for an Easter service in a church that follows the traditional, formal service paradigm. It also is for a group that has both the resources and the inclination to prepare and perform a work that is listenable, memorable, and spiritually uplifting yet demanding and capable of fostering artistic growth. I classify it as difficult mainly because of the tenor solo ("Sweet triumph now prevails …") but also because of the complexity of the vocal parts in both the second stanza of the march ("On this hallow’d day of days, …") and the trio ("Birdsong and brightest hues …").

"Day of Peace and Gladness" began as an instrumental march in English style (e.g., the Elgar "Pomp and Circumstance" marches and the marches by Walton, Coates, and others) during a visit to London in the early spring of 1991. The music came to mind more or less all at once while I was in sight of the Marble Arch, at the junction of Park Lane and Oxford Street. Hence its inspiration was similar to that of my hymn tune "Whitehall" of 1972 (see "Immortal, Invisible, God Only Wise," vocal and string settings, also at this site). Between 1991 and early 2005, I re-scored it for voices, organ, and brass and added the text. I also must confess to one conceit, which was the fashioning of the French horn part for my son, who was Principal Horn in the Texas Music Educators’ Association 2005-2006 High School Honor Band and a horn scholarship student at Louisiana State University (Class of 2011). He now (2015) is a performer and teacher after completing a master’s degree in horn performance at Roosevelt University, Chicago (2013), where he was a pupil of Dale Clevenger, then Principal Horn of the Chicago Symphony. He now (2016-2018) is a student in the Doctoral of Musical Arts, or DMA, program (horn performance) at the University of Wisconsin, Madison, while continuing his work as a teacher and performer, as well as the father of a daughter (b. 2015).

"Day of Peace and Gladness" can be used within a single service, as an Offertory or main anthem, with "Great Day of Resurrection" (tune: "Commonwealth Avenue") utilized as the Introit.

Horn in F, Trombone, Trumpet in B-flat and Tuba

Horn in F, Trombone, Trumpet in B-flat and Tuba