By: J. Marshall Bevil
For: Large mixed ensemble
This music is in your basket
View basket
Loading... 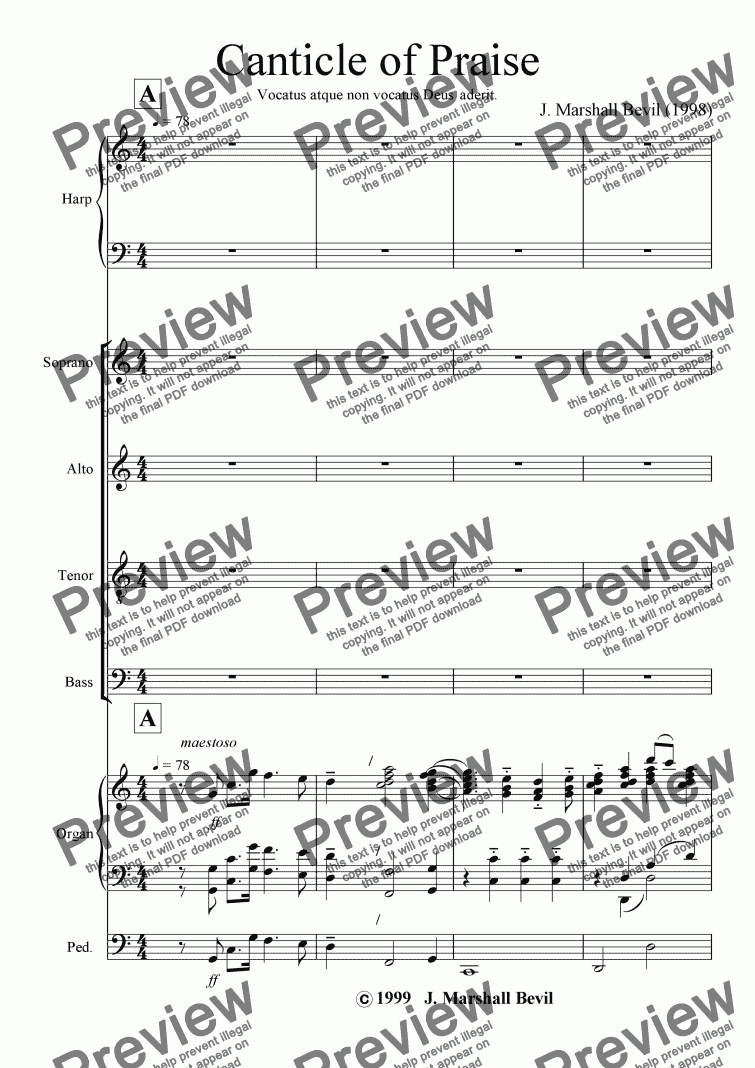 "Canticle of Praise," for large chorus, small chorus, vocal octet, lyric baritone solo, antiphonal coloratura sopranos, organ, and harp, is a deeply and intensely personal work. "Canticle of Praise" is my largest effort to date at creating sacred music that adheres to traditional models (in this case, the early-modern English anthem) rather than making extensive use of contemporary popular idioms. However, the text, which is adapted from the Scriptures, is both my personal creed and a message for our age. Further, there are brief occurrences of more distinctively secular sounds within the music, especially the major triad with the added sixth (e.g., C-E-G-A), a harmonic sonority both dear to my heart (in fact, a personal musical signature) and a familiar "jazz lick." Yet none of this should cause one to overlook the expressions of my love of their music and the enormous debt that I owe to Sir Charles Hubert Hastings Parry (the bravura organ exposition of what is, in essence, a concerto grosso first-movement scheme in miniature), Sir Charles Villiers Stanford (supple, lyric melodic style with a hint of linguistic influence, especially in the baritone solo and choral section immediately following), Sir Edward Elgar (angular melody clearly imitating the marked rise and fall of properly spoken English, especially at "And hence now we offer unto him our loftiest paean …"), Ralph Vaughan Williams ("He lays a calming hand upon the soul that mourns or fears … ," the Gloria Patri that also possesses a touch of Herbert Howells, and the frequent anhemitonic-pentatonic melodic and harmonic sonorities reflecting the influence of the indigenous music of the British Isles), and Frederick Delius (the aforementioned major triad with the added sixth, which also is found in the music of Vaughan Williams and which has a pentatonic basis). A final influence was that of Sir Edward Bairstow, who did so much in his works ("Blessed City, Heavenly Salem," etc.) to establish the instruments as equal to, and at times greater than, the voices in importance in the anthem of England of ca. 1885-1915, which is my favorite historical combination of place and time.

One might also note that the contrasting lyric theme, beginning with the baritone solo followed by a harmonized choral continuation, is, in fact, a transformation of the bravura opening. Actually, the opposite took place as far as the creation of the music is concerned. The lyric manifestation with harmony came first, as a textless musical reflection on an event in my life that had no spiritual or religious connections whatsoever. Later, as I was writing the present anthem (after beginning, then abandoning, a setting of the Magnificat), I started with the lyric material, then worked backward to fashion the dramatic organ exposition and the bold opening of the choral exposition followed by choral and instrumental material that allows the opening intensity to dissipate before the start of the lyric portion of the exposition in the contrasting key. Subsequently,both a descending, three-note figure and its prefatory, arpeggiated rise, both common to each manifestation, became the joint bases of the brief instrumental quasi-development section (i.e., brief motivic manipulation without ever leaving the home key). A true, fully-fledged instrumental development section would have disturbed the balance of the piece as a whole, which, in the last analysis, is a single-movement, principally vocal work.

"Canticle" is more of a sacred concert piece than functional church music, 1) BECAUSE OF ITS VERY HIGH LEVEL OF DIFFICULTY characterized by a) wide vocal ranges, b) marked angularity of melodic lines, c) demanding instrumental parts and baritone solo, d) tight, close, mostly mild dissonances that have to be tuned carefully to achieve shimmer but not harsh clashing, e) contrasting open harmonies that pose a different sort of tuning problem, and f) demands for rather high levels of musical literacy throughout the sections of the large and small vocal ensembles; 2) DUE TO ITS LENGTH; 3) DUE TO THE NECESSARY AMOUNT OF PREPARATION TIME (in some cases, perhaps as much as a year); and 4) BECAUSE OF ITS ONLY LOOSE CONNECTIONS (AT BEST) TO THE ESTABLISHED LITURGY.

In the last connection, it is, after a fashion, analogous to the Gounod St. Cecilia Mass and other works that cannot be used in strictly liturgical situations because of departures from prescribed texts. In particular, I’m aware that some may question the appropriateness of the Gloria Patri in a work that does not draw on standard liturgy, but I consider it musically integral to the work and therefore must insist that it not be omitted in performance.

Further, I’ve encountered some reticence concerning what some regard as the undue length of the organ opening of the work. Although I understand that, I dispute the use of the term _overture_, and point out that it is in fact an instrumental exposition in the home key preceding the choral exposition of the bravura manifestation, also in the home key, followed in turn by the standard transition and then the continuation of the exposition, with transformation of the bravura opening (i.e., the contrasting theme) in a related key, and thus formally correct. Hence, I must also ask that the organ exposition not be abridged in performance. Likewise, there should be no other cuts.

Unfortunately, the composition software that I used in preparing this work did not allow changes in organ registrations. I would suggest an opening with full organ, followed by an immediate reduction to softer stops at measure 5, beat 2, followed by a gradual return to full organ from measures 12 - 15. Some cutting back probably should be done once the voices enter (measure 20). Care should be taken to avoid overpowering the harp in the organ-harp dialogue in the short quasi-development section. Once the voices re-enter, the setting previously used from the initial vocal entrance may be used; or, if there are enough singers, something approaching full organ may be utilized until shortly before the Gloria Patri, at which point a very soft setting should be introduced prior to the organ’s becoming silent.