By: Barsegh Kanachyan (1885–1967)
For: Orchestra
This music is in your basket
View basket
Loading... 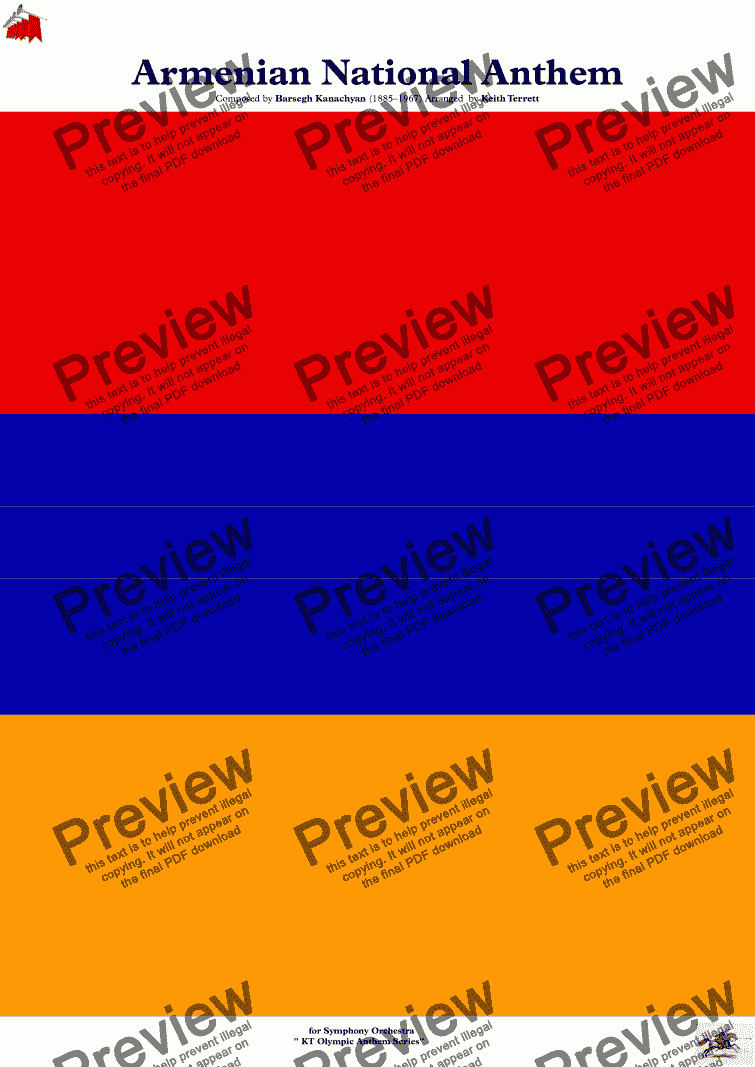 Composer
Barsegh Kanachyan (1885–1967)
Year of composition
1918
Arranger
Keith Terrett
Year of arrangement
2019
Publisher
Music for all Occasions
Difficulty
Moderate (Grades 4-6)
Duration
1 minute
Genre
Classical music
License details
For anything not permitted by the above licence then you should contact the publisher first to obtain permission.

The Armenian National Anthem arranged for Symphony Orchestra, ready for an olympics! There are versions for Brass Quintet & String Orchestra in store.

The lyrics of "Mer Hayrenik" were derived from a poem written by Mikael Nalbandian in 1861. Although its title can be translated as "The Italian Girl's Song" or "Song of an Italian girl" (Armenian: Իտալացի աղջկա երգը, romanized: Italats’i aghjka yergy), it is more well-known by its incipit, "Mer Hayrenik" (Our Fatherland). In the early 20th century, the music was composed by Barsegh Kanachyan. Subsequently, both the lyrics and music were adopted as the national anthem of the First Republic of Armenia, which briefly existed from 1918 to 1920.

he Red Army invaded Armenia in November 1920, in spite of the Treaty of Sèvres – which granted the country international recognition as a sovereign state – having been signed only three months earlier. In 1922, it was absorbed into the Transcaucasian Socialist Federative Soviet Republic (TSFSR), together with Azerbaijan and Georgia, and the TSFSR subsequently became part of the Soviet Union at the end of that same year. As an unmistakable symbol of Armenian nationalism, "Mer Hayrenik" was outlawed by the Bolshevik authorities. In its place, the Anthem of the Armenian Soviet Socialist Republic was utilized from 1944 onwards. Because of this, "Mer Hayrenik" took on a new status as a protest song against Soviet rule during this time. "Mer Hayrenik" was reinstated as Armenia's national anthem on 1 July 1991, by the constituent republic's Supreme Soviet. The lyrics are not identical to the 1918 version, however, because several of the words have been modified. As an intrinsic element of civic education in Armenia, the anthem is one of several national symbols which feature prominently in the classrooms of the country's schools. By dignifying the song in this manner, teachers reckon that this "encourage[s] students to sing the national anthem every day".