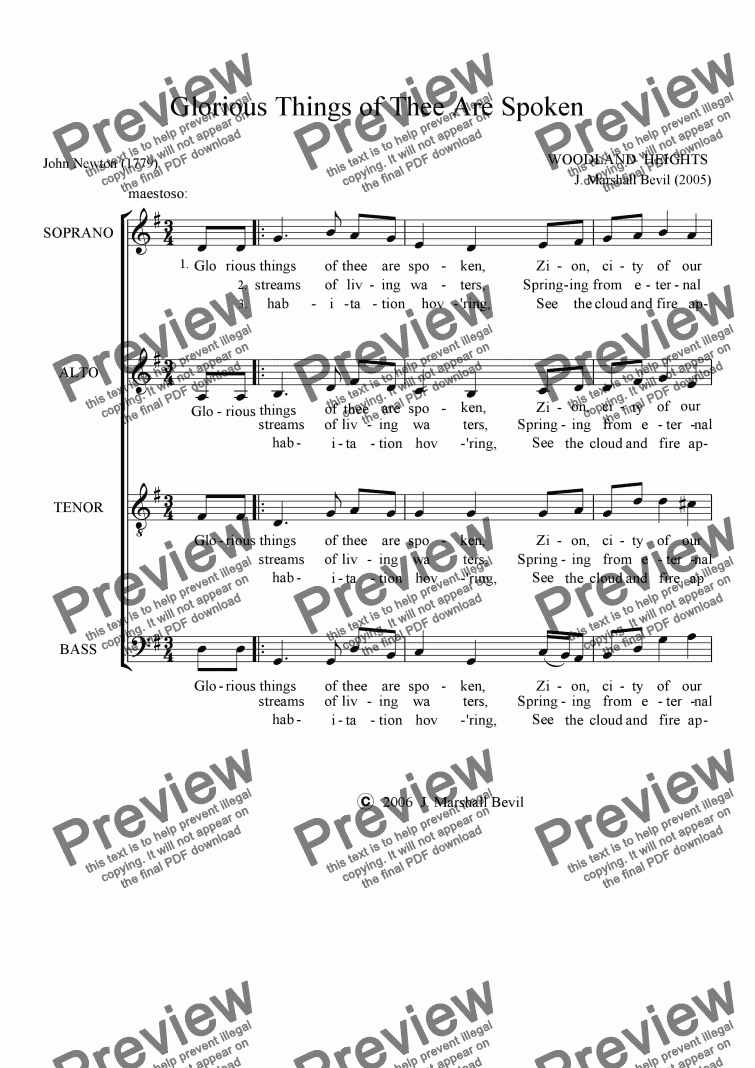 My hymn tune "Woodland Heights" was inspired by a visit to that venerable, century-old residential enclave on Houston’s near-northwest side during the Holiday in the Heights festivities, in the winter of 2005. I sketched out the melody and harmony simultaneously in my mind while standing on the veranda of a raised cottage on Euclid Street, and I wrote down my musical thoughts shortly thereafter, as usual in the case of my hymn tunes, without reference to any hymn text. After searching both my own memory and every hymnal I could find and considering the many hymns with 87.87.D syllabication (also 87.87.87, with the final two lines repeated), I settled on John Newton’s magnificent "Glorious Things of Thee Are Spoken" because its overall demeanor and, more specifically, its inflectional patterns and its many rich vowel sounds seemed, to me, to fit the music best.

"Woodland Heights" is a stylistic hybrid that blends the technical fireworks of the fully developed chorale; the almost bluntly assertive power of the Welsh hymn tune from either side of ca. 1900; the dignity of the typical English hymn setting from that same period (and also the standard, almost obligatory, harmonic turn through the secondary dominant that marks that species); and even a few traits of traditional American southern folk hymnody - in particular, the incipient anhemitonic-pentatonicism and formulaic opening semi-phrase. This was not an initial goal. Rather, I realized what I had done after I had completed the work.

I should stress that "Woodland Heights" is offered only as an alternative to Franz Joseph Haydn’s wonderful ’Austrian Hymn," not as an improvement on it or a replacement for it. One perhaps could state that "Austrian Hymn" complements primarily the elegance of Newton’s poem while "Woodland Heights" relates more to its power. Such, however, is ultimately a subjective assessment and hence should not be taken as an attempt to state any sort of irrefutable fact.