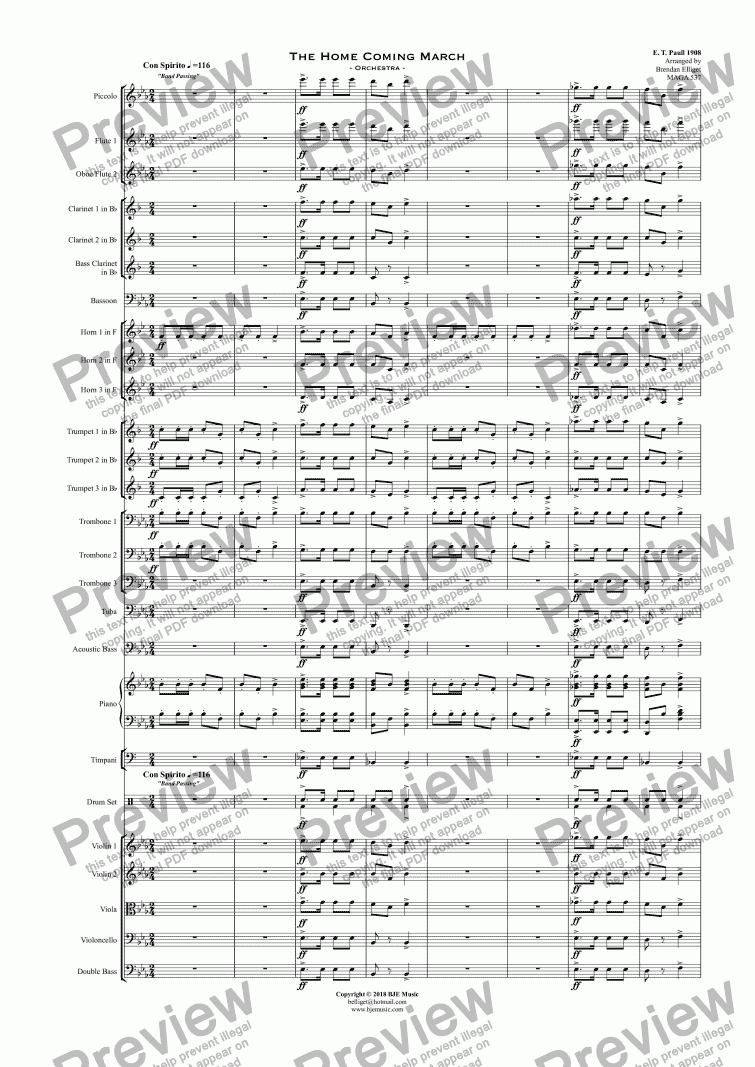 Price:
(+ VAT when applicable. Price is for score onlyPrice is for score and complete set of 32 parts)
Note: The publisher requires a minimum purchase of 1 licenses
Change currency...
You are purchasing high quality sheet music PDF files suitable for printing. You are purchasing a this music. Be sure to purchase the number of copies that you require, as the number of prints allowed is restricted.

"Of course, eventually, all the soldiers and sailors had to eventually come home from all the battles and Paull had that eventuality well covered also. The artwork on the front cover (of unknown origin) is one that is full of imagery that covers all aspects of the services, Army and Navy and is full of patriotic and familial ideals. The border lists all of the US States and the corner pictures depict aspects of homecoming. The main image is a parade of victory. Let's let Paull explain it all to us as he did on the inside cover.

Why This Piece Of Music Was Named

The Home Coming March Explanatory "When the author had about completed the music of the present march, it occurred to him that it might be well to have suggestions made from a number of people, recommending a good name for same, for after all there is considerable in a name. He, therefore, had a special advertisement placed in several of the leading music Journals throughout the country, offering a prize of $10.00 in gold to anyone suggesting a name that would be accepted. Over three thousand names were sent in from all parts of the country, even from far away New Zealand and Australia, in which countries the author's marches are universal favorites. Included in the letters received was one from Mr. W. C. Bates, Secretary of the Sheffield Advertising Agency of New York and Chicago, in which he suggested the name "The Home Coming March." After due consideration, this name was accepted, and the prize was awarded and paid to Mr. Bates, who stated that he was prompted to recommend this name on account of having been present during the impressive celebration of "Old Home Week" in Boston, Mass., last year. Probably no one idea is so universally dominant in the mind of the Human Race as that of home, or matters pertaining to home. The author believes that the name selected is one that will appeal to everyone; as the many pleasant associations with the words "Home Coming" are almost without limit. The title page of this march is without any exception the handsomest seen on a piece of music. The main body of the title pace represents a street scene, with buildings decorated and shows a handsome royal Arch of Welcome in the foreground, gaily decorated with flags, emblems, and bunting. A band is shown passing under the arch, leading a procession of the "Home Guard," and thousands of people waving handkerchiefs, banners, flags, etc. Four smaller scenes also appear on the page, one representing the "Home Coming" of the soldier from war; another scene shows the "Home Coming" of the sailor boys embarking from their battleships; another scene represents the "Home Coming" reunion of the family and loved ones; the fourth scene represents the "Home Coming" of the father from work, where a little tot has been watching and waiting, and runs to meet him. The whole design of the title page is then surrounded by a border of differently designed medallions, on which appears the names of all the States of the Union, making without a doubt, the most unique and attractive title page ever conceived for a piece of music."

One thing Paull mastered early in his career was the art of overstatement! Musically, this march is beginning to show the repetitiveness of many of Paull's works, especially evident as time passed. Once Paull found the formula (a fabulous cover and a playable, rousing march) that sold music, he stuck with it and was quite successful as a result.

This arrangement is for ORCHESTRA with the original optional piano part. There are optional parts for Clarinet 3, Bb Bass Clarinet, Alto, Tenor, and Baritone Saxophones as well as parts of Euphonium in TC and BC. The MP3 was recorded with NotePerformer 3.

There is also an arrangement for Concert Band at the site. 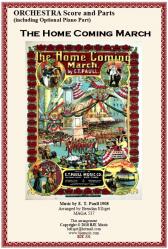