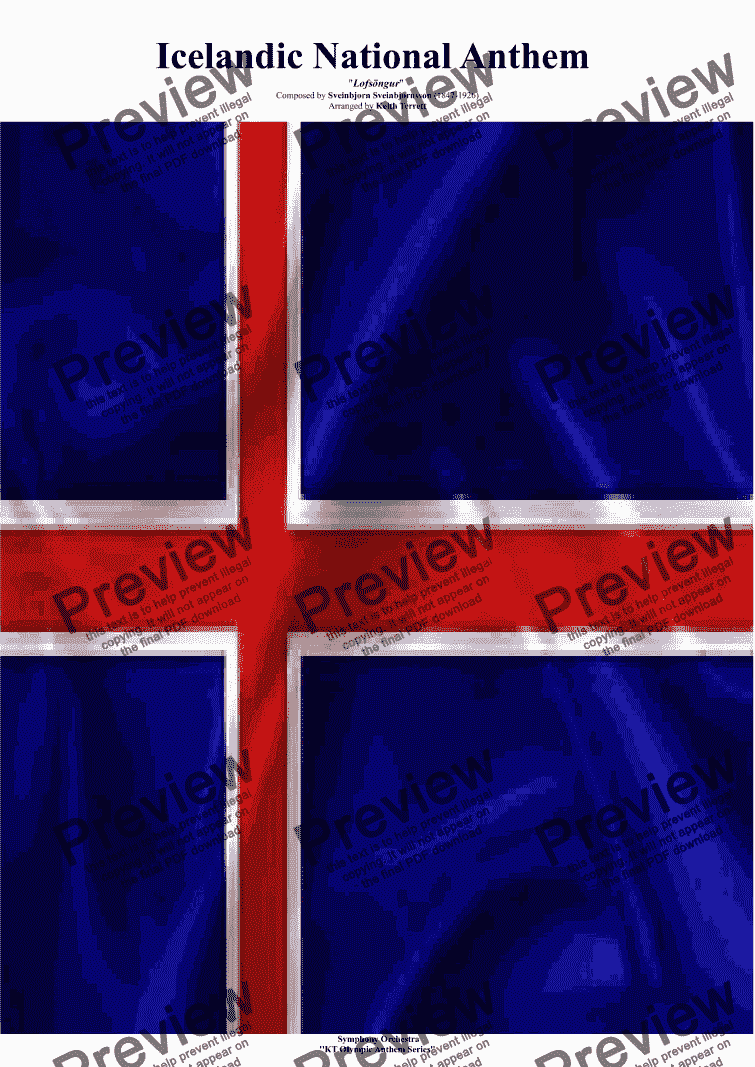 An arrangement for Symphony Orchestra of the Icelandic National Anthem.

The Icelandic national anthem Ó, guð vors lands (Our country's God) was originally written as a hymn on the occasion of the nationwide celebrations held in 1874 to commemorate the millennium of Iceland's settlement. Religious services were held all over the country and the text for the sermons delivered on that day was Psalm 90, verses l-4 and 12-17, by decree of the Bishop of Iceland. This text inspired the anthem which the Rev. Matthías Jochumsson (1835-1920), one of Iceland's most loved poets of all time, wrote while he was in Britain in the winter 1873-74. The tune was composed by Sveinbjörn Sveinbjörnsson (1847-1926), the first Icelander to make a career out of music. For most of his working life Sveinbjörnsson lived in Edinburgh, where he wrote the music to Jochumsson's hymn.

The anthem was first performed at a commemorative service in Reykjavík Cathedral on Sunday, August 2, 1874, in the presence of King Christian IX of Denmark, who was visiting Iceland for the millennium celebrations, the first ruling monarch to set foot in the country. He presented Iceland with a constitution which entailed substantial improvements to its legal status. This was one of the most noteworthy milestones in Iceland's process towards reclaiming the independence it had lost in 1262-64 and preceded the Home Rule Government in 1904, sovereignty in 1918 and, finally, the establishment of the Republic of Iceland on June 17, 1944.

While sovereignty remained a distant prospect, Iceland had no national anthem in the normal sense of the term. However, Our country's God was often sung in public in the final quarter of the 19th century, and during the period between home rule and sovereignty, 1904-1918, it became established as the national anthem by tradition. On December 1, 1918 (sovereignty day) it was sung as Iceland's national anthem and has been ever since. Jochumsson's poem, however, is more a hymn than a patriotic ode, and the range of the tune is much too wide for many people to be able to sing. Icelanders do not regard this as an obstacle and no other patriotic ode, even those which are easier to sing, has supplanted Our country's God as national anthem. It has even acquired all the more reverence by not becoming commonplace. People in Iceland revere Matthías Jochumsson's lofty verse and the solemn, moving song is dear to their hearts.