A musical rendering of a brilliant round: its cut, colour, and clarity, including a setting of the "Song of Solomon" 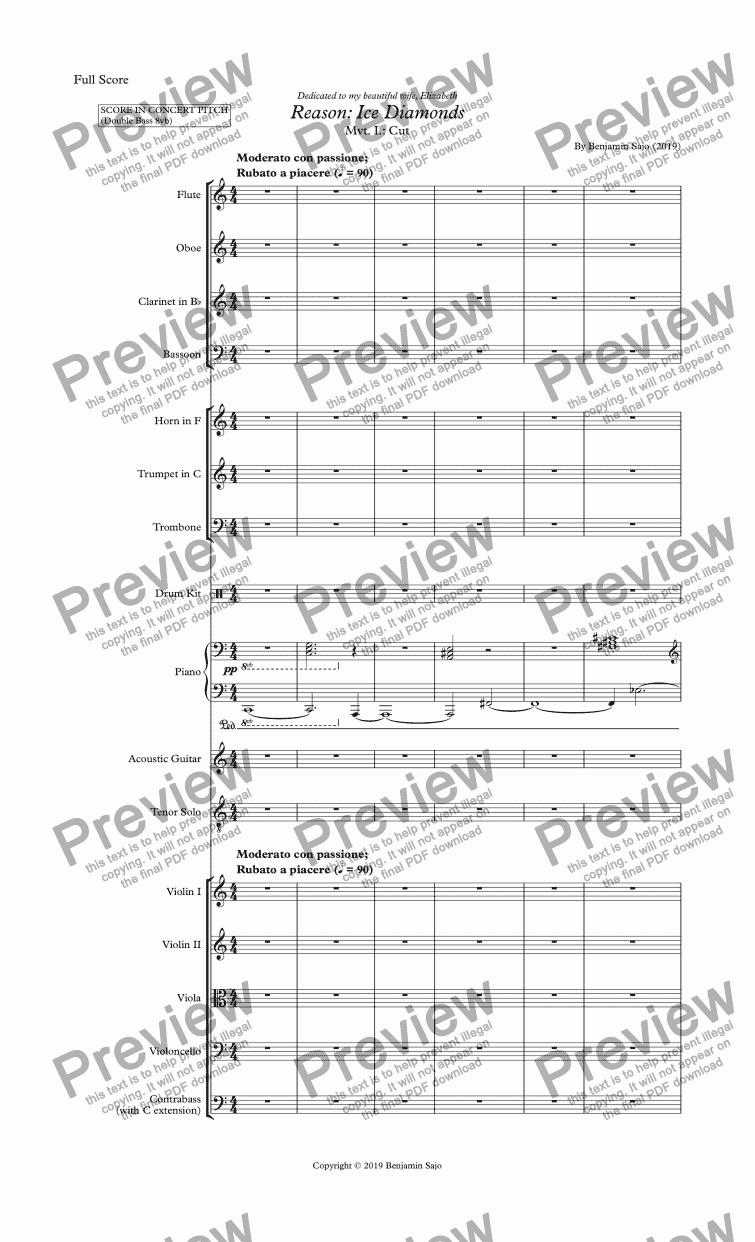 For you, a musical rendering of a beautiful, brilliant ideal round cut diamond! Long serving as a poetic representation of invincibility, purity, enlightenment, and enduringness across diverse cultures, "Reason: Ice Diamond" revolves around a fixed melody (cantus firmus), derived from the trigonometrical attributes of a brilliant round diamond, examined from three contrasting and increasingly revelatory points-of-view: its cut, colour, and clarity.

Movement I. “Cut”: Imagine the essence of a diamond reduced to Euclidean vectors: pure lines and angles in beautiful symmetry. The orchestra becomes monophonic and united in purpose, with the tune passing among crackling octaves and supported by either subtle drones or driving rhythms representing the churnings and forgings of the cthonic earth, the maw of Sheol, with the wide octaves evoking the stardust from which all diamonds and all life ultimately comes from.

Movement II. “Colour”: The bright light of triadic harmonies, built on the first six partials of the harmonic series, embraces and caresses the cantus firmus. Yet, the light bends and metamorphoses during its journey through the stone, expressed by parallel musical keys–especially heard in the pure tones of the synthesizer–becoming more and more remote from along the circle of fifths, creating shifting polytonal degrees of dissonance–an odyssey of photons.

Movement III. Clarity: Beginning with romantic guitar strums, the Song of Solomon pleads for the listener to arise and be loved. The Crown setting is a more through-composed arioso with the Upper Pavilion being a horah-inspired dance.

With melodies contrapuntally gushing and swooping from all corners, they draw from the Otonal scale for the Crown and the Utonal scale for the Pavilion. These scales, exotic yet familiar, were chosen because of their origins in the harmonic and subharmonic series and because I recognize them to be musical metaphors for the prism effect of a diamond transforming white light into all the colours of the rainbow–the glorious “fire” and “sparkle!”

I dedicate this work first and foremost to my wife, but to all of those who were a part of my life in the past year, including family, fellow teachers, artists, and my colleagues at the jewellery store I used to work alongside.

The recording was made using Noteperformer Software and features the vocal talents of Quebecois tenor Marc-Antoine Brûlé.