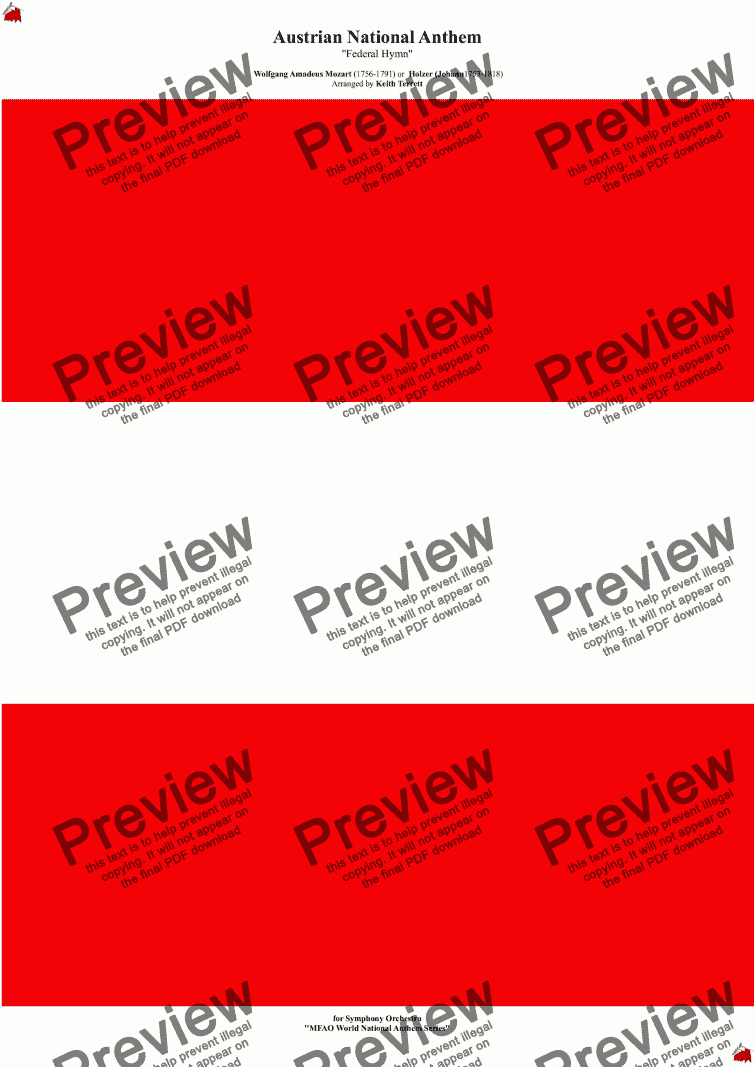 Officially adopted on 25 February, 1947. Wolfgang Amadeus Mozart has been claimed as the composer, but the evidence is more in Holzer’s favour, according to Austrian scholarship.

On 9 April 1946, the Austrian Federal Government announced a competition for the text of a new national anthem. It was to be “a song of hymn-like character paying tribute in words and music to the new Austrian federal state and its people both at home and abroad.” The old anthem melody, now being used by Germany, could not be used because of its association with the Nazi regime.

Agreement was soon reached on the melody; popular belief is that it is a work from Austrian composer Wolfgang Amadeus Mozart, but studies have shown this may not be the case. While the piece appears in Mozart’s “Kleiner Freimaurer-Kantate”, written in 1791 for the Freemason lodge “Zur neu gekronten Hoffnung” in Vienna, in which Mozart himself was a member, the original score of the work, which is kept by the Vienna Society of Friends of the Music, does not include the melody used as the anthem. But when the lodge published a printed version a year later, the melody appears in the appendix, entitled “Zum Schluss der Loge” (“On the end of lodge’), that is, it should be sung on the end of a gathering, beginning with the words “Bruder, reicht die Hand zum Bunde” (“Brothers, give your hands for union”). In this version, it was frequently used by choral societies and student’s fraternities in Germany and Austria in the 19th century, and became known as “Bundeslied” (Union Song). The appendixed melody thus hasn’t been proven or disproven to be written by Mozart, several scholars claim it could have been written by Mozart’s contemporary (and fellow lodge member) Johann Holzer.

Paula von Preradović, the granddaughter of a Croatian national poet – was persuaded by Minister of Education Felix Hurdes to submit an entry for the competition. However, she was busy working on a new novel, had little time to spare for her entry, and Minister Hurdes had to jog her memory several times. When her lines did finally reach the jury – made up of literary figures, musicians and politicians – they awarded her text the highest points. The text was never published in the official Legal Gazette but appeared in the 22 March 1947 issue of the Die Presse newspaper. Two weeks earlier the anthem had been played on the radio. It established its popularity relatively fast, although the melody was considerably more complex than that of the former anthem. When Minister Hurdes reported to the cabinet on the outcome of the competition, the cabinet passed a motion – at the instigation of the Federal President – that in the course of the State Treaty negotiations Austria should insist that “Germany be prohibited from using the Haydn anthem because it is a long-standing Austrian cultural asset.”

In the early 21st century, there was a proposal by Austria’s Minister of Women’s Affairs to change the lyrics of the anthem (eliminating words and phrases like “home of great sons”, “fraternal”, and “Vaterland” (“Fatherland”)) to make them more gender-inclusive); amid much controversy, a proposal was passed to change the lyrics beginning January 1, 2012, the first verse now references sons and daughters instead of just sons (“Heimat bist du grosser Söhne”) and the third verse now references “jubilant choirs” instead of “fraternal choirs” (“Brüderchören”).

If you need an anthem arranging that is not yet in my store, let me know and if possible I will arrange it for you.

Maybe you require an anthem for a different instrumentation than you find in my store, let me know your requirements; and I will specifically arrange it for you.

I have anthems published in the 11th Edition of National Anthems of the World, which includes the anthem of Papua New Guinea

https://www.scoreexchange.com/profiles/keithterrett1 Need an anthem fast? They are ALL in my store! All my anthem arrangements are also available for Orchestra, Recorders, Saxophones, Wind, Brass and Flexible band. If you need an anthem urgently for an instrumentation not in my store, let me know via e-mail, and I will arrange it for you FOC if possible! keithterrett@gmail.com If you perform this arrangement in public, make a recording or broadcast it through any media, please notify the PRS (UK), or ASCAP (USA), or SOCAN (Canada), or APRA (Australia) or KODA (Denmark) or the equivalent organisation in your own country, giving the name of the arranger as Keith Terrett. 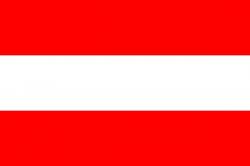 What a great sounding arrangement of the Austrian National Anthem, can't wait to hear this collection of anthems by Keith Terrett performed in public at a large international event.

Every anthem I have heard is a hidden gem!