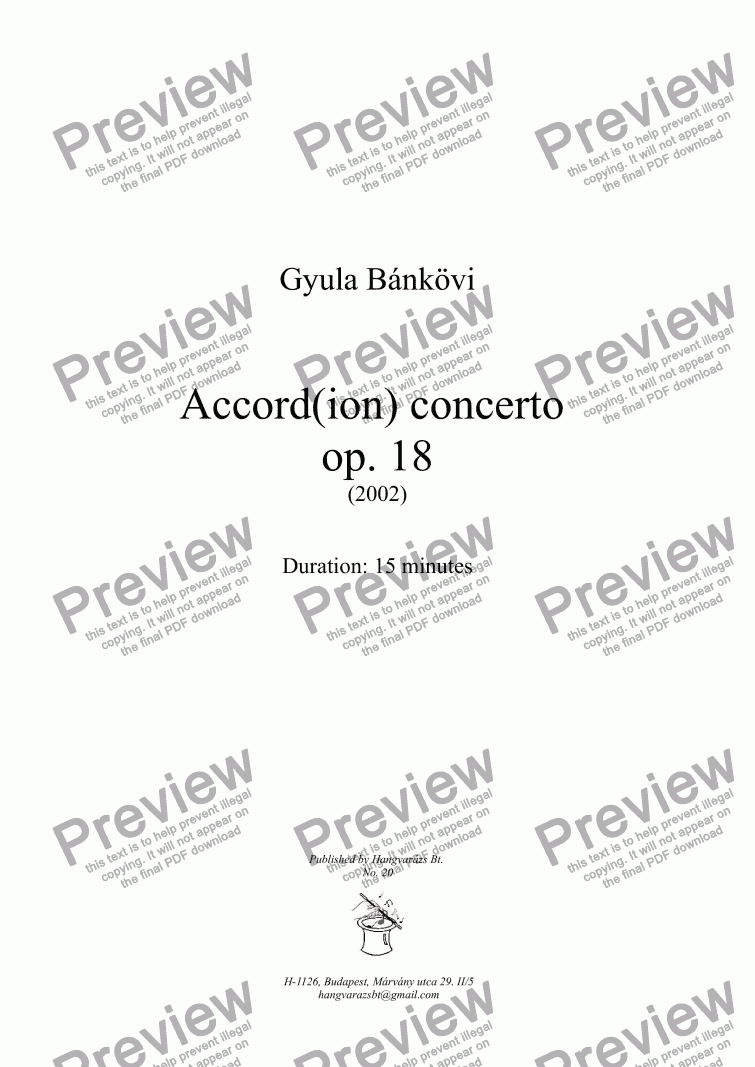 Price:
(+ VAT when applicable. Price is for score onlyPrice is for score and complete set of 36 parts)
Note: The publisher requires a minimum purchase of 1 licenses
Change currency...
You are purchasing high quality sheet music PDF files suitable for printing. You are purchasing a this music. Be sure to purchase the number of copies that you require, as the number of prints allowed is restricted.

In the spring of 2001, the Hungarian Music Association, and through it, the National Cultural Basis Programme, contacted me to compose a new musical piece. By that time, I had long been dealing with the accordion that I considered an increasingly popular instrument also in contemporary music. So I was happy to seize this opportunity and we agreed upon the composition of an accordion concerto that would have been written for a string orchestra, besides the solo instrument. But half a year had passed between the signature of the contract and the start of composition, so I completely forgot what we had agreed upon before at least as regards the musical potential. So, when I finally started to work, composed the music for a grand orchestra in which the accordion was only slightly accentuated. I made the musical sketch of the piece in three days, then instrumented it in three weeks, and did not think of the contract at all. I was almost ready when the Association asked me to show them the first part of the composition. At this point, it turned out that I did not write the composition in a way that we agreed upon. Fortunately, only some smaller problems of instrumentation were left so I did not stop finishing the work when the Hungarian Music Association told me not to support the presentation of the work as I did not fulfil the terms of the contract (as I composed a piece for a much larger ensemble). In the spring of 2002, through the good offices of a devoted contemporary music editor of the Radio, Eszter Lazar, the Symphony Orchestra of Hungarian Radio accepted to present my musical composition. So, in April 2002, I finished the score.

This musical composition is not an accordion concerto but rather the competition of accordions built on four modes: minor, major, diminished and seventh chords. These are the basic harmonies of the accordion instrument. The play of words in the title, Accord(ion) Concerto, indicates it precisely that the piece is about the competition of harmonies, and not that of the instruments and the orchestra.

Though it must be admitted that from among the instruments, the accordion plays the most prominent part. Besides the four harmonies, the sounding structure of the piece is blended by a combination of interval steps that finally extends to a major third by semitones. The musicians reach the semitone steps mainly with continuous glissando-playing, while trying to exceed by it the limits of the 12-tonal system. The continuous glissando-move is also present throughout the composition, increasing towards the middle part (sometimes it spans over almost two octaves) and towards the end, diminishing again, returning to the world of semitones.

I wanted to paint a great fresco with the composition. Sometimes, the harmonies are sounding as if they surpassed each other, with the same intensity (forming heavy sound-blocks by it), and sometimes they appear from behind each other. But I also tried to make the change of harmonies (that means also the competition of consonant and non consonant chords, due to the systems!) not only on the basis of algebraic expressions but also in a way that it should captivate the listeners by the natural wavering, solution-ligature of music, as clear musicality, the essential message of music cannot be replaced by any algebraic or other structure!

The musical composition is dedicated to accordion player László Ernyei, who participated in making the recording, and the performance could not have been realized without him.

In order to submit this score to ScoreExchange.com Gyula Bánkövi has declared that they own the copyright to this work in its entirety or that they have been granted permission from the copyright holder to use their work. If you believe that this score should be not available here because it infringes your or someone elses copyright, please report this score using the copyright abuse form. 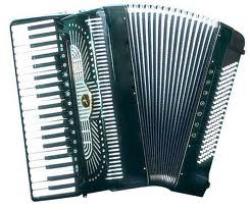