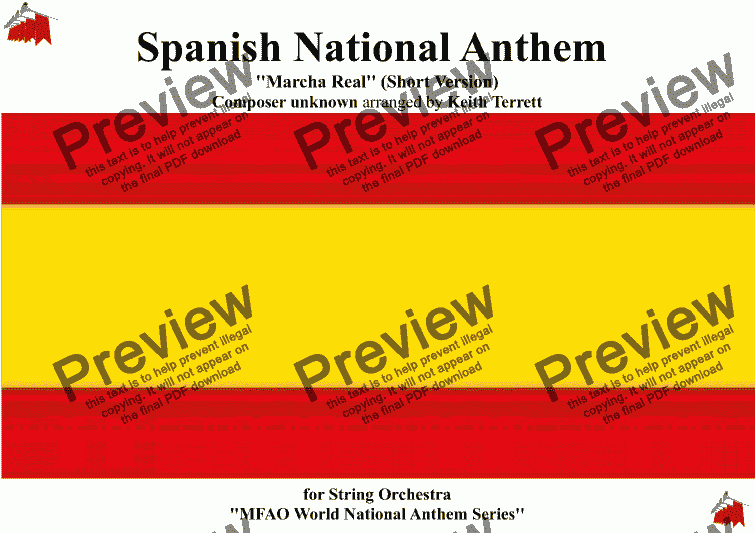 A short version of the Spanish National Anthem arranged for String Orchestra.

The "Marcha Real" (Spanish pronunciation: [ˈmaɾtʃa reˈal]; "Royal March") is the national anthem of Spain. It is one of only four national anthems in the world (along with those of Bosnia and Herzegovina, Kosovo, and San Marino) that has no official lyrics (although it had lyrics in the past, they are no longer used).

One of the oldest in the world, the Spanish national anthem was first printed in a document dated 1761 and entitled Libro de la Ordenanza de los Toques de Pífanos y Tambores que se tocan nuevamente en la Ynfantª Española (Book of the Ordenance of Newly Played Military Drum and Fife Calls by The Spanish Infantry), by Manuel de Espinosa. There, it is entitled "La Marcha Granadera" (English: "March of the Grenadiers"). According to the document, Manuel de Espinosa de los Monteros is the composer.

There is a misconception that its author was Frederick II of Prussia, a great lover of music. That started in 1861 when it appears for the first time published in La España militar (Military Spain). In 1864, the colonel Antonio Vallecillo published the story in the diary El Espíritu Público (The Public Spirit), claiming the supposed Prussian origin of Marcha Real popular. According to Vallecillo, the anthem was a gift from Frederick II to the soldier Juan Martín Álvarez de Sotomayor, who was serving in the Prussian Court to learn the military tactics developed by Frederick II's army, under orders of King Charles III. In 1868, the history is published in Los Sucesos, changing the destinatary of the gift with Pedro Pablo Abarca de Bolea, Count of Aranda. The myth was picked up in different publications of 1884 and 1903 until it was included in 1908 in the Enciclopedia Espasa.

In 1770, Charles III declared the "Marcha de Granaderos" as the official Honor March, and that formalized the habit of playing it in public and solemn acts. It became the official anthem during Isabel II's reign.

After the 1868 Revolution, General Prim convoked a national contest to create an official state anthem, but it was declared deserted, advising the jury that "Marcha de Granaderos" was considered as such. By Alfonso XIII's time, it was established by a Royal Circular Order (27 August 1908) that interpreted the harmonization of the march done by Bartolomé Pérez Casas, Major Music of the Royal Corps of Halberdier Guards. During the Second Republic, Spain didn't have an official anthem and Himno de Riego was adopted as pseudo-official anthem.

The actual symphonic version of the "Marcha Real" that replaces the Pérez Casas one belongs to maestro Francisco Grau and is the official one after the Royal Decree of 10 October 1997, when the Kingdom of Spain bought the author rights of the Marcha Real, then belonging to Pérez Casas's heirs. According to the Royal Decree 1560/1997, it should be in the key of B-flat major and a tempo of 76 bpm (♩=76), with a form of AABB and a duration of 52 seconds. 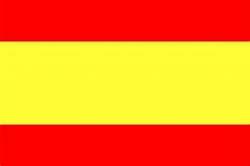