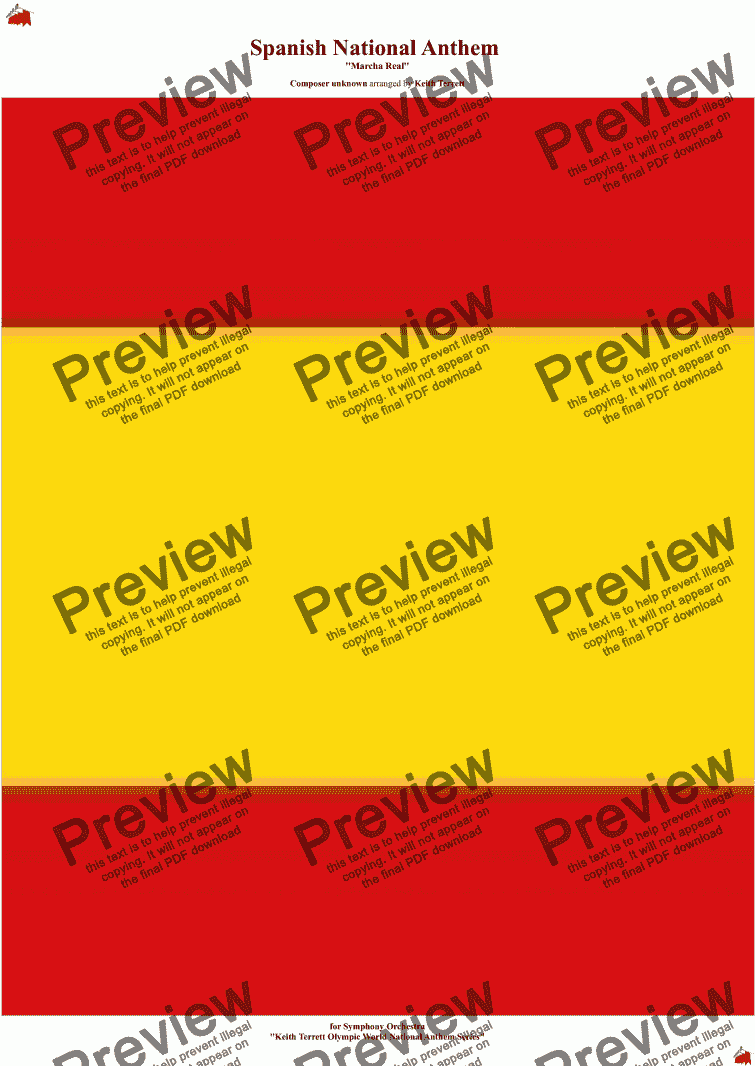 The Spanish National Anthem arranged for full Symphony Orchestra, there is a short version in my store in case you need it! Just need a sporting event now such as an Olympics!

The Marcha Real (Spanish pronunciation: [ˈmartʃa reˈal], "Royal March") is the national anthem of Spain. It is one of only three national anthems (along with that of Bosnia and Herzegovina and the Republic of Kosovo) in the world to have no official lyrics.

One of the oldest in the world, the anthem was first printed in a document dated 1761 and entitled Libro de la Ordenanza de los Toques de Pífanos y Tambores que se tocan nuevamente en la Ynfant° Española (Book of the Ordenance of Newly Played Military Drum and Fife Calls by The Spanish Infantry ), by Manuel de Espinosa. Here it is entitled La Marcha Granadera ("March of the Grenadiers"). There is written its score on this book. According to this document, Manuel de Espinosa de los Monteros is the composer.

There is a false belief that Marcha Real’s author was Frederick II of Prussia, a great lover of music. This belief started in 1861 when it appears for the first time publied in La España militar (The Militar Spain). In 1864, the colonel Antonio Vallecillo publishes the history in the diary El Espíritu Público (The Public Spirit), making the supposed Prussian origin of Marcha Real popular. According to Vallecillo, the anthem was a gift from Frederick II to the soldier Juan Martín Álvarez de Sotomayor, who was serving in the Prussian Court to learn the military tactics developed by Frederick II’s army, under orders of King Charles III. In 1868 the history is published in Los Sucesos, changing the destinatary of the gift with Pedro Pablo Abarca de Bolea, Count of Aranda. The myth was picked up like this in different publications of 1884 and 1903, until being included in 1908 in the Enciclopedia Espasa.

Under the Trienio Liberal (1820-1823), the First Spanish Republic (1873–74) (when it enjoyed of a co-officiality) and the Second Spanish Republic (1931–1939), El Himno de Riego replaced La Marcha Real as the national anthem of Spain. At the conclusion of the Civil War, however, Francisco Franco restored La Marcha Real as the country’s national anthem, under its old title of La Marcha Granadera.

Military bands of the Spanish Armed Forces and the National Police Corps of Spain and civilian Marching bands and Concert bands play the B flat-major version of the anthem adapted for wind bands (as arranged by Francisco Grau), and playing the A Major version is optional.

The bugle call "To the Colors" in Spain is the version played by Bugle bands in Spanish churches in religious occasions and processions organized by civil groups and the parishes. Various versions adapted for the drum and the bugle are used, even though brass instruments play the anthem as well. But in some bugle bands, the A flat version of the anthem (the old official one, adapted for the bugle) is played. Only a bugle call is sounded when the B flat version is played.

Being the National Anthem, and in honor of the King and Queen of Spain, it’s a common practice for all to stand once it is played. Even though it is also played in church events, respect for the King and Queen (and the Royal Family as well) is required by everyone in attendance. As it happens civilians stand at attention while those in uniform salute when not in formation.

The long, complete version is the honors music for the King, while a shorter version without the repetitions is performed for the President of the Government of Spain, the Prince of Asturias, or during sporting events. 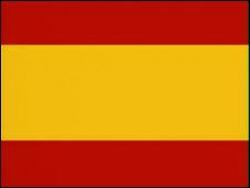