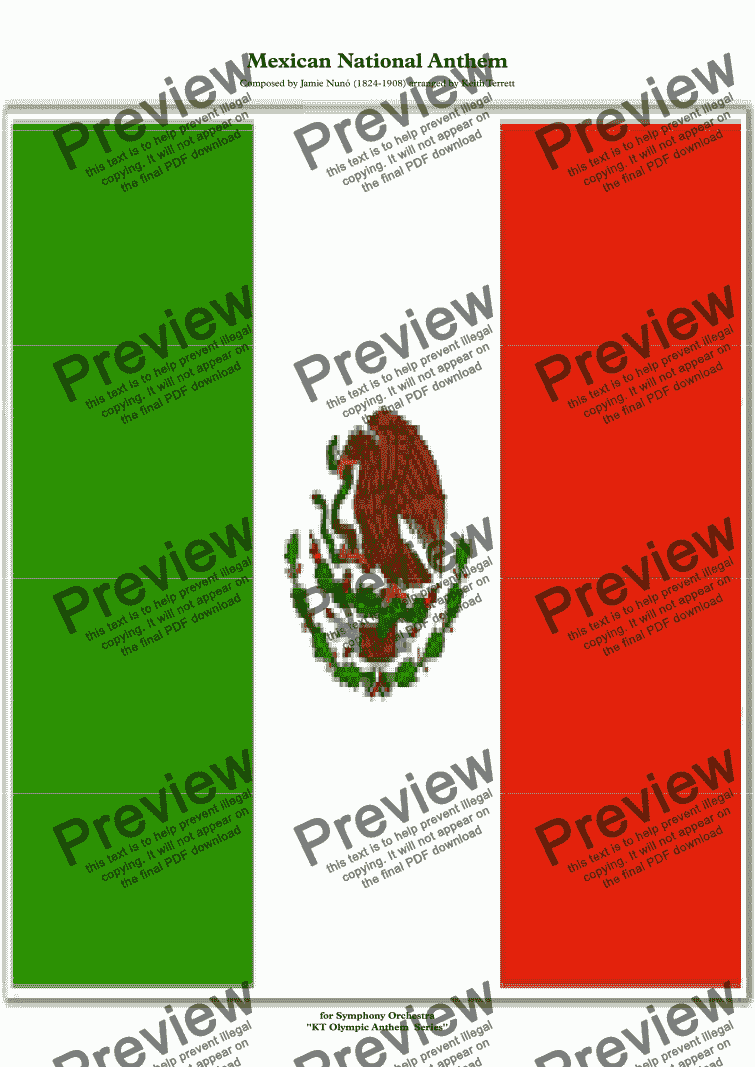 An arrangement for full Orchestra of the national anthem of Mexico. There are alternative versions for Brass Quintet & String Orchestra in my stor If you are hosting a sports event, and need arrangements of anthems let me know if I can assist: keithterrett@gmail.com

The "Mexican National Anthem" (Spanish: Himno Nacional Mexicano), also known by its incipit "Mexicans, at the cry of war" (Spanish: Mexicanos, al grito de guerra), is the national anthem of Mexico. The anthem was first used in 1854, although it was not officially adopted de jure until 1943. The lyrics of the national anthem, which allude to historical Mexican military victories in the heat of battle and including cries of defending the homeland, were composed by poet Francisco González Bocanegra after a Federal contest in 1853. Later, in 1854, he asked Jaime Nunó to compose the music which now accompanies González's poem. The national anthem, consisting of ten stanzas and a chorus, effectively entered into use on September 16, 1854.

A musical composition was chosen at the same time as the lyrics. The winner was Juan Bottesini, but his entry was disliked due to aesthetics. This rejection caused a second national contest to find music for the lyrics. At the end of the second contest, the music that was chosen for González's lyrics was composed by Jaime Nunó, the then Catalonian-born King of Spain's band leader. At the time of the second anthem competition, Nunó was the leader of several Mexican military bands. He had been invited to direct these bands by President Santa Anna, whom he had met in Cuba. About the time that Nunó first came to Mexico to start performing with the bands, Santa Anna was making his announcement about creating a national anthem for Mexico. Nunó's anthem music composition was made like masterpieces of classical music, with a high quality in composition, and was chosen. Out of the few musical compositions submitted, Nunó's music, titled "God and Freedom" (Dios y libertad), was chosen as the winner on August 12, 1854. The song was officially adopted as the Mexican national anthem on Independence Day, September 16 of that same year. The inaugural performance was directed by Juan Bottesini, sung by soprano Claudia Florenti and tenor Lorenzo Salvi at the Santa Anna Theatre.

For more of my original music, great arrangements and all the national anthems of the world, check out my on-line stores: https://www.scoreexchange.com/profiles/keithterrett1 http://www.sheetmusicplus.com/search?Ntt=keith+terrett Need an anthem fast? They are ALL in my store! All my anthem arrangements are also available for Orchestra, Recorders, Saxophones, Wind, Brass and Flexible band. If you need an anthem urgently for an instrumentation not in my store, let me know via e-mail, and I will arrange it for you FOC if possible! keithterrett@gmail.com If you perform this arrangement in public, make a recording or broadcast it through any media, please notify the PRS (UK), or ASCAP (USA), or SOCAN (Canada), or APRA (Australia) or KODA (Denmark) or the equivalent organisation in your own country, giving the name of the arranger as Keith Terrett. Love national anthems, then join me on twitter, facebook, instagram & soundcloud for frequent updates & news on my Olympic bid!

A lovely arrangement from the pen of Mr. Keith Terrett of the Mexican National Anthem, the new master of national anthem arrangements for full Orchestra. There was Peter Breiner, now there IS Keith Terrett!

Really love these epic South American anthems with such great orchestrations; would be great to hear them performed at a large event in the future.