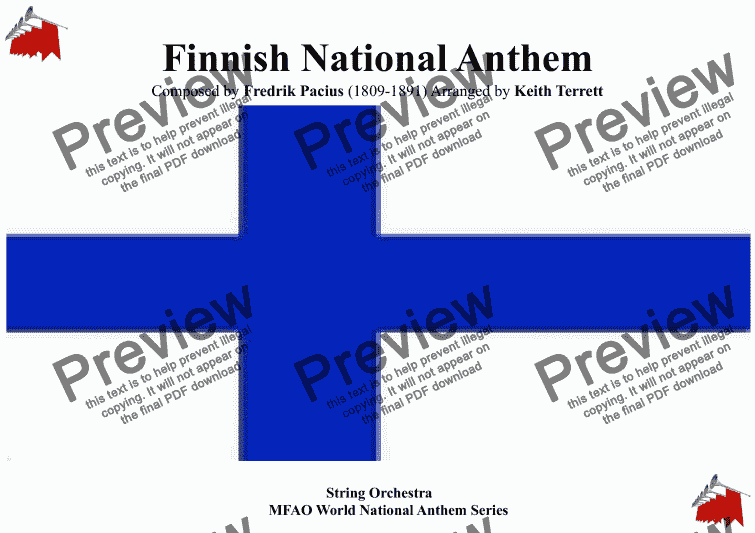 An arrangement for String Orchestra of the national anthem of Finland. There are also versions for Brass Quintet & Symphony Orchestra in my two stores.

"Maamme" (Finnish: [ˈmɑːmːe]) or "Vårt land" (Finland Swedish: [ˈvoːrt ˈlɑnːd]; both meaning "Our Land") is Finland's national anthem. The music was composed by the German immigrant Fredrik Pacius, with (original Swedish) words by Johan Ludvig Runeberg, and with this music it was performed for the first time on 13 May 1848. Originally it was written for the 500th anniversary of Porvoo and for that occasion it was Runeberg himself who wrote the music.The poem has been influenced by the "Szózat" (Appeal) of Mihály Vörösmarty, both in style and content.[

The melody of "Maamme" is also used for the national anthem of Estonia with a similarly themed text, "Mu isamaa, mu õnn ja rõõm" ("My Fatherland, My Happiness and Joy", 1869).It is also considered to be the ethnic anthem for the Livonians as "Min izāmō" ("My Fatherland").

The original poem, written in 1846 but not printed until 1848, had 11 stanzas and formed the prologue to the verse cycle The Tales of Ensign Stål ("Fänrik Ståhls Sägner"), a classic example of Romantic nationalism. The current Finnish language text is usually attributed to the 1889 translation of Ensign Stål by Paavo Cajander, but in fact originates from the 1867 translation by Julius Krohn.

The Tales of Ensign Stål were much appreciated throughout all of Scandinavia. Up until the time of Finland's independence in 1917 and 1918, when the song began to be recognized as specifically applying to Finland, Pacius's tune and Runeberg's text were often also sung in Denmark, Norway, and Sweden. Note that in the original Swedish text there is no reference to Finland (except for in verses 4 and 10, which are rarely sung), only to a country in the north, but the Finnish text explicitly refers to Finland. The poem's theme is, furthermore, remarkably similar to that of the national anthems of Sweden ("Du gamla, Du fria") and Norway ("Ja, vi elsker dette landet").[citation needed]

There is no law regarding an official national anthem in Finland, in the way the coat of arms and flag of Finland are legally defined. Instead its position has been established gradually by convention over the years.

Today, "Maamme" is firmly established by convention. Children learn it in school; in formal occasions it is sung both in Finnish and in Swedish. It is played at sporting events, such as the Olympics. In the 1880s and in the 1920s there were more attempts to replace it with a Finnish language version but these ceased by the 1930s. Some Finns have proposed that the Finnish national anthem be changed to "Finlandia" by Jean Sibelius, with lyrics by V.A. Koskenniemi (Finnish) and Joel Rundt (Swedish). There are also those who simply prefer "Finlandia" as a musical piece, although critics claim that it is difficult to sing.[citation needed]

It is said that Pacius composed the tune in four days. It was popular throughout the 19th century, but established as national anthem only after Pacius' death.

During 1993, an instrumental version of Maamme was used as Finnish professional wrestler Tony Halme's (under the ring name "Ludvig Borga") entrance theme