By: Mendi Mengjiqi (1958-)
For: String orchestra
This music is in your basket
View basket
Loading... 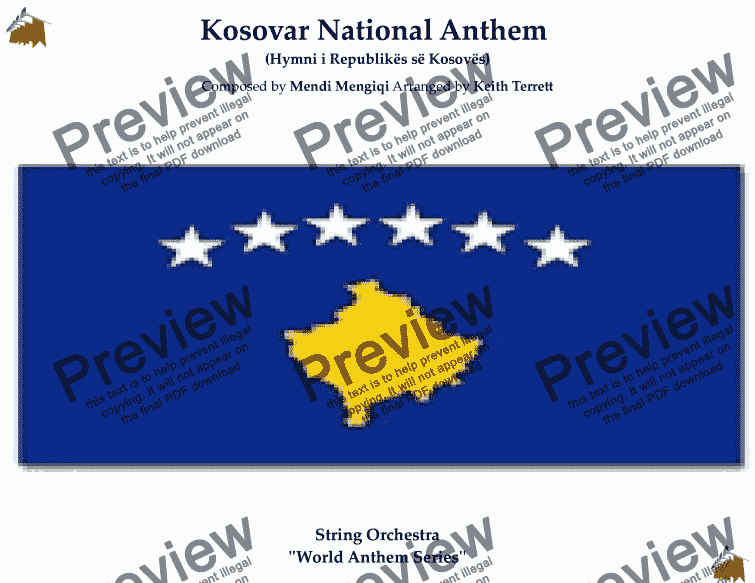 Composer
Mendi Mengjiqi (1958-)
Year of composition
2008
Arranger
Keith Terrett
Year of arrangement
2019
Publisher
Music for all Occasions
Difficulty
Easy (Grades 1-3)
Duration
1 minute
Genre
Classical music
License details
For anything not permitted by the above licence then you should contact the publisher first to obtain permission.

The national anthem of Kosovo arranged for String Orchestra. There are versions for Brass Quintet & full Orchestra in store.

Other orchestrations are available on request:keithterrett@gmail.com

Europe is the national anthem of the Republic of Kosovo. It was composed by Mendi Mengjiqi. The anthem has no lyrics. It was adopted on 11 June 2008. It was chosen because it contained no references to any specific ethnic group. It was selected by the Assembly of Kosovo, with 72 MPs voting in favour, while 15 voted against and five abstained.

On 12 March 2008 the Assembly of Kosovo announced an open contest to choose the anthem in Pristina newspapersand on the official website of the Assembly. The rules include: "Composition should be distinguishable: - should be unique and original" "Length of the composition should not last less than 30 seconds or more than 60 seconds." "Texts can be included as well in the application, in any official language of the Republic of Kosovo" however, the final adoption is believed not to include them. Choosing the text for the anthem would have been a difficult task because the majority of the population in Kosovo are Albanians, Serbs being the second largest ethnic group. The government has emphasized that no ethnic group should be discriminated against, declaring the state a "democratic, secular and multiethnic republic" thus making it difficult to find lyrics that do not favor one ethnic group over another one. Similar problems were encountered when choosing the flag. Furthermore, the rules also state that the proposal "Should not present or be similar to the hymn or popular song of any country, or hymn of any political party, movement or Institution of Republic of Kosovo, or to implicate any faithfulness towards any ethnic community of Republic of Kosovo." The proposals must be submitted by 31 March 2008. The composer of the adopted piece will be awarded €10,000 and two other qualified proposals will receive €7,000 and €5,000.

"Ode to Joy", the anthem of the European Union, was played at the official declaration ceremonies of the Republic of Kosovo. The Kosovo interim government decided to do this as a mark of respect to the European Union for its efforts on helping in gaining independence.

"Himni i Flamurit", the national anthem of Albania has been widely used in Kosovo with other Albanian national symbols. It was also the anthem of the unrecognized Republic of Kosova that existed from 1990 until 2000 when the province was taken into the control of the United Nations.

"Kur ka ra kushtrimi n’Kosovë", a song composed by Rauf Dhomi, was proposed by the former President of Kosovo, Ibrahim Rugova, as the anthem in 2000. However, no decision was made back then. The anthem has lyrics in the Albanian language.

Kosovo is the subject of a territorial dispute between the Republic of Serbia and the self-proclaimed Republic of Kosovo. The latter declared independence on 17 February 2008, but Serbia continues to claim it as part of its own sovereign territory. Kosovo's independence has been recognised by 101 out of 193 United Nations member states.