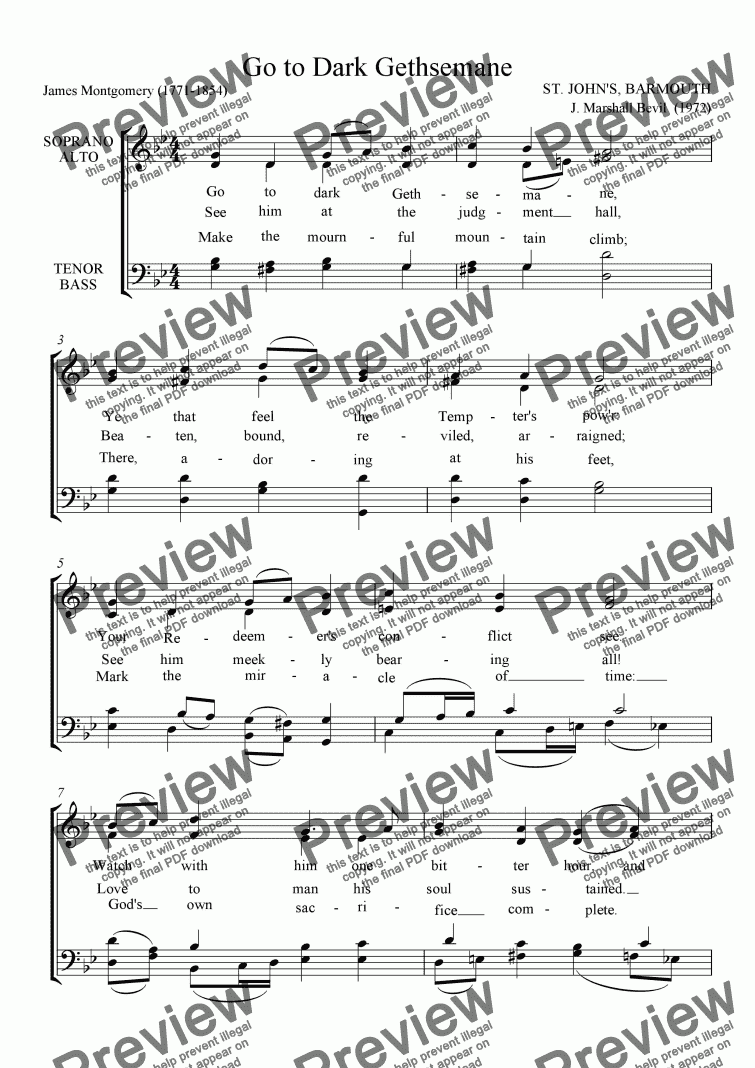 My hymn tune "St. John’s, Barmouth" represents a melding of the harmonic and contrapuntal devices and technical demands of the fully developed chorale with the often dark demeanor, the always ruggedly earthy qualities, and the almost overwhelming power of the great Welsh hymn tunes of the late nineteenth and early twentieth centuries ("Cwm Rhondda," "Bryn Calfaria," "Aberystwyth," "Hyfrydol," and others). I composed it in 1972 after visiting St. John’s Church in Barmouth, a seaside town in Wales, initially for the purpose of examining sculptures of string instument players as part of my M.Mus thesis research on the crwth. To my delight, the minister there was an avid amateur musician who was interested in my efforts, discussed relevant issues with me for much of an afternoon, and put me into contact with several useful informants, including the famous, then-octogenarian Welsh harpist Nansi Richards.

Most of my hymn tunes have pre-dated pairings with their texts, and this one was no exception. It was not until 1978, while preparing my _Lenten and Easter Miscellany_, that I combined James Montgomery’s text with the music.

"St. John’s, Barmouth" also can be paired with other texts. In some non-Lenten applications, it would not be inappropriate to have the final chord of the "Amen" (or the hymn tune proper if the "Amen" is omitted) be major - i.e., change the b-flat of the chord to a b-natural, forming a Picardy third. That, however, would not be proper for Lent.

I classify the hymn tune as easy with a measure of trepidation. Its successful performance could require more than the average degree of musical literacy on the part of a church choir or congregation, but then such could well be found within a group that would be attracted to this type of music. In such a case, performance should not be too difficult. Optimal choral performance, as opposed to congregational singing, requires choristers who can sing unaccompanied in tune and keeping up the pitch for all stanzas, and read and execute rhythms well. All voices in the ensemble need to be strong but smooth and controlled with ample presence, and they must be able to blend seamlessly with each other.