By: Isaac Albeniz
For: Solo instrument (Classical Guitar [notation])
This music is in your basket
View basket
Loading... 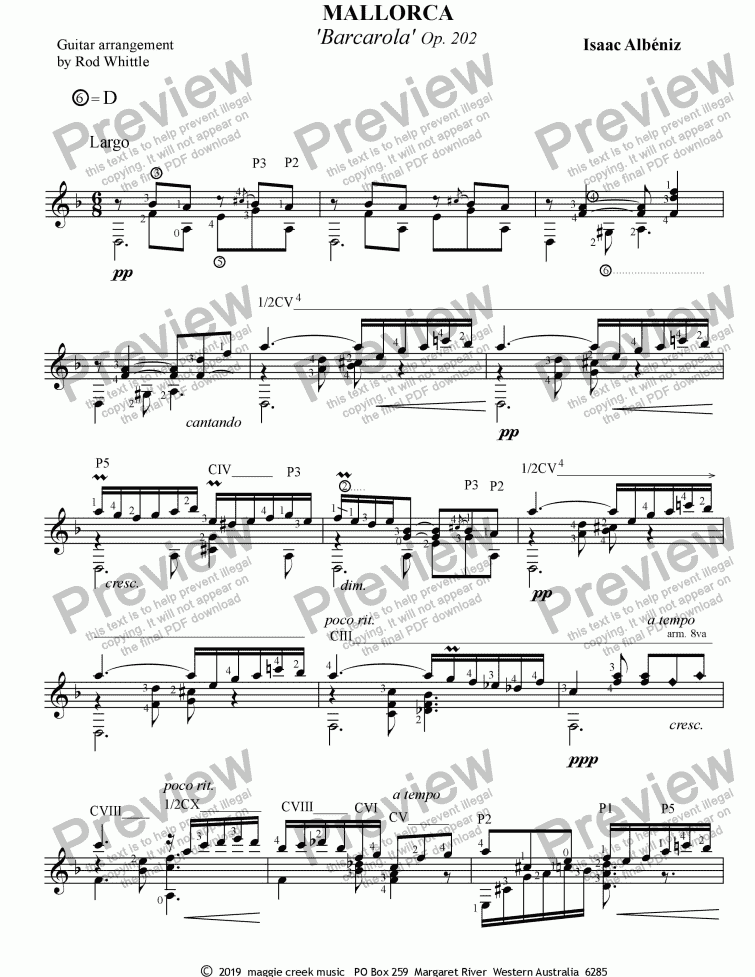 Composer
Isaac Albeniz
Year of composition
1890
Publisher
Rod Whittle
Difficulty
Moderate (Grades 4-6)
Duration
8 minutes
Genre
Classical music
License details
For anything not permitted by the above licence then you should contact the publisher first to obtain permission.

For solo classical guitar. 5 pp. The level of difficulty is intermediate.

Albéniz was born in the Gerona province of Spain. He was a child prodigy, first performing at the age of four. As a boy, after trying to run away from home several times, he traveled the world with his father giving concerts. He continued to perform, but became more and more interested in composition, inspired by the folk music and dances of his native land. Exceptional natural ability and years of learning, both in Spain and other European countries, added distinction to his work, much of the best of it for piano.

Although he did not compose for guitar – a Spanish development and key to musical expression there – it was a prominent influence in his writing, and a number of significant classical guitar transcriptions have resulted from the piano pieces. Mallorca is from a relatively early period of composition, about which Albéniz remarked, ' I believe that the people are right when they continue to be moved by Córdoba, Mallorca, by the copla of the Sevillanas, by the Serenata, and Granada. In all of them I now note that there is less musical science, less of the grand idea, but more colour, sunlight, flavour of olives … music of youth, with its little sins and absurdities …' Classical guitarists have a lot to discover, and to be grateful for, here.

Mallorca is a piece where it really pays to prepare by noting (and then attending to!) the changes in dynamics and tempo, which are frequent.

Sorry, there's no reviews of this score yet. Please .
In order to submit this score to ScoreExchange.com Rod Whittle has declared that they own the copyright to this work in its entirety or that they have been granted permission from the copyright holder to use their work. If you believe that this score should be not available here because it infringes your or someone elses copyright, please report this score using the copyright abuse form.