By: Composed by Ciprian Porumbescu (1853–1883)
For: String orchestra
This music is in your basket
View basket
Loading... 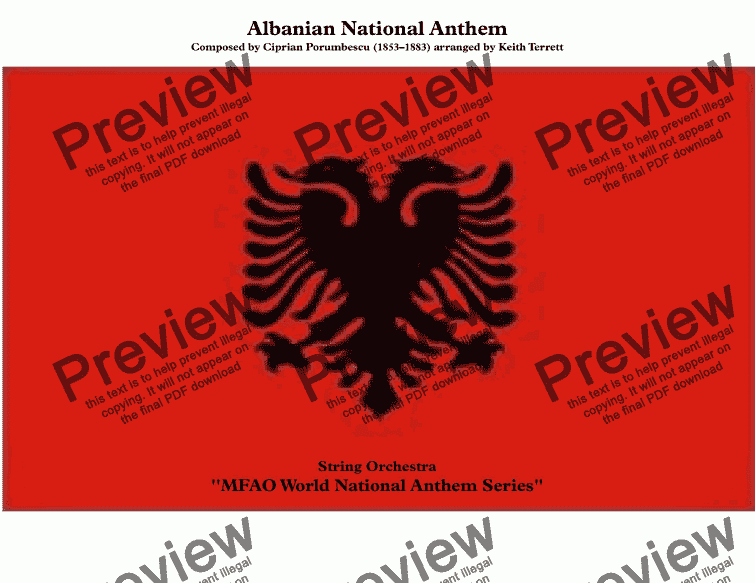 Composer
Composed by Ciprian Porumbescu (1853–1883)
Year of composition
1912
Arranger
Keith Terrett
Year of arrangement
2019
Publisher
Music for all Occasions
Difficulty
Easy (Grades 1-3)
Duration
1 minute
Genre
Classical music
License details
For anything not permitted by the above licence then you should contact the publisher first to obtain permission.

An arrangement of the national anthem of Albania for String Orchestra ﻿& Percussion. There are other versions in store for Brass Quintet & Orchestra.

﻿ Himni i Flamurit (English: Hymn to the Flag) is the national anthem of Albania. The music of the anthem was adapted from an original composition by the Romanian composer Ciprian Porumbescu, for the song "Pe-al nostru steag e scris Unire" (or "E scris pe tricolor unire"). Whereas the words were written by the Albanian poet Asdreni (Aleksandër Stavre Drenova), and are merely different from the original Romanian lyrics which Andrei Barseanu wrote for Porumbescu's piece. The hymn was first published as a poem in Liri e Shqipërisë (in English: Freedom of Albania), an Albanian newspaper in Sofia, Bulgaria, on April 21, 1912. The original title of the poem was "Betimi mi flamur," ("The Pledge on the Flag"). It was later printed in a volume of poems by Drenova titled Ëndra e lotë (in English: Dreams and tears), which was published in Bucharest. According to Lasgush Poradeci's memoirs, the anthem, created by the adaptation of the text to the music, was not originally intended to be a national anthem, yet, it was so much liked from people that it was proclaimed as the national anthem in 1912, and it was under its music that the Albanian flag was raised during the Albanian Proclamation of Independence in 1912 in Vlore, Albania. According to Hungarian musicologist György Ligeti, the music, composed by Porumbescu, is deeply rooted in Germanic and Austrian musical traditions, and very similar to mid 19th century Germanic songs[citation needed]. This is also explained by Porumbescu's musical formation, since he had studied at the University of Music and Performing Arts, Vienna. The view has been shared by Albanian musicologist, Ramadan Sokoli. For more of my original music, great arrangements and all the national anthems of the world, check out my on-line stores: http://www.scoreexchange.com/profiles/keith_terret http://musicforalloccasions.org.uk http://www.sheetmusicplus.com/search?Ntt=keith+terrett﻿