By: Manuel de Espinosa de los Monteros (1730-1810)
For: Orchestra
This music is in your basket
View basket
Loading... 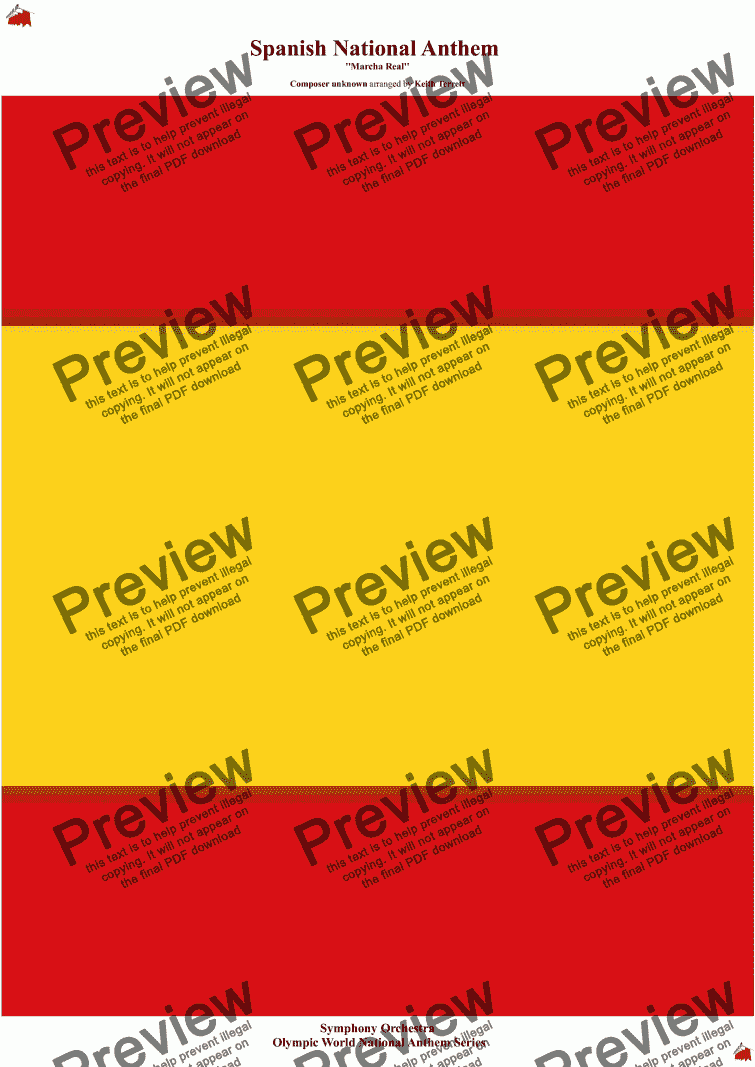 Composer
Manuel de Espinosa de los Monteros (1730-1810)
Year of composition
1761
Arranger
Keith Terrett
Year of arrangement
2019
Publisher
Music for all Occasions
Difficulty
Moderate (Grades 4-6)
Duration
1 minute
Genre
Classical music
License details
For anything not permitted by the above licence then you should contact the publisher first to obtain permission.

A short arrangement of the national anthem of Spain for full Orchestra, one of my Olympic anthems!

The "Marcha Real" (Spanish pronunciation: [ˈmaɾtʃa reˈal]; "Royal March") is the national anthem of Spain. It is one of only four national anthems in the world (along with those of Bosnia and Herzegovina, Kosovo, and San Marino) that has no official lyrics (although it had lyrics in the past, they are no longer used).

One of the oldest in the world, the Spanish national anthem was first printed in a document dated 1761 and entitled Libro de la Ordenanza de los Toques de Pífanos y Tambores que se tocan nuevamente en la Ynfantª Española (Book of the Ordenance of Newly Played Military Drum and Fife Calls by The Spanish Infantry), by Manuel de Espinosa. There, it is entitled "La Marcha Granadera" (English: "March of the Grenadiers"). According to the document, Manuel de Espinosa de los Monteros is the composer.

There is a misconception that its author was Frederick II of Prussia, a great lover of music. That mistaken belief arose in 1861 when it was published as fact in the periodical La España militar (Military Spain). In 1864, Col. Antonio Vallecillo published the story in the diary El Espíritu Público (The Public Spirit), claiming a supposed Prussian origin for Marcha Real. According to Vallecillo, the anthem was a gift from Frederick II to the soldier Juan Martín Álvarez de Sotomayor, who was serving in the Prussian Court to learn the military tactics developed by Frederick II's army, under orders of King Charles III. In 1868, this spurious history was published in Los Sucesos, changing the beneficiary of the gift to Pedro Pablo Abarca de Bolea, Count of Aranda. The myth was picked up in different publications of 1884 and 1903 until it was included in 1908 in the Enciclopedia Espasa.

In 1770, Charles III declared the "Marcha de Granaderos" the official Honor March, an act that formalized the tradition of playing it in public, especially on solemn occasions. It became the official Spanish anthem during Isabel II's reign.

In 1870, after the 1868 Revolution, General Juan Prim organized a national contest to create a new official state anthem, and a jury consisting of three well-known composers was chosen to designate a winning entry. Although over 400 compositions were submitted, including those written by the young composers Federico Chueca, Ruperto Chapí and Tomás Bretón, a new anthem was never selected. After extensive deliberations, the jury had advised that "Marcha de Granaderos" was already considered the country's official anthem, and the contest was suspended.[3] By Alfonso XIII's time, the Royal Circular Order of 27 August 1908 established the musical score orchestrated by Bartolomé Pérez Casas, Superior musician of the Royal Corps of Halberdier Guards, as the official version; it is known traditionally as the "Grenadier March" or the "Royal Spanish March". During the Spanish Second Republic the Himno de Riego was adopted as the anthem of the republic.

The actual symphonic version of the "Marcha Real" that replaced the Pérez Casas one was written by maestro Francisco Grau and is the official one after the Royal Decree of 10 October 1997, when the Kingdom of Spain bought the author rights of the Marcha Real, then belonging to Pérez Casas's heirs. According to the Royal Decree 1560/1997, it should be in the key of B-flat major and a tempo of 76 bpm (♩=76), with a form of AABB and a duration of 52 seconds.

The current official version of "Marcha Real", as described in Royal Decree 1560/1997,[5] is a sixteen-bar long phrase, divided in two sections, each one is made up of four repeated bars (AABB form). Tempo is set to ♩= 76 and key to B-flat.

The long, complete version is the honors music for the King, while a shorter version without the repetitions is performed for the Princess of Asturias, the President of the Government of Spain, or during sporting events.

As the harmonisation of "Marcha Real" was written by Pérez Casas in the early 20th century, the copyright has not yet expired. The government bought it from Pérez Casas' estate in 1997 for 130 million pesetas (781,315.734 euros) to avoid future legal problems. Until it expires, the copyright belongs to the Ministry of Culture and collecting societies charge copyright fees, which has led to criticism.

As a result, many different harmonisations have been devised by performers to avoid paying. Nonetheless, the rights to the 1997 Francisco Grau revision were transferred to the government at no charge, but they were not placed in the public domain.

After witnessing a rendition of "You'll Never Walk Alone" at Anfield in 2007, the President of the Spanish Olympic Committee (COE), Alejandro Blanco, said he felt inspired to seek lyrics to "La Marcha Real" ahead of Madrid's bid to host the 2016 Olympic Games. That same year Telecinco, enticed by the COE, organized a National contest and posted 25 different lyrics on their website which they thought best matched COE's requirements. The winner was chosen after 40,000 people voted. The lyrics by Enrique Hernández-Luike, magazine publisher and poet, spoke of freedom, peace and the Constitution. The winning lyrics were sung by the Ronda de Aranzueque choir in Pastrana, and filmed by German television. However, the COE organized a new competition for the lyrics, which resulted in between 2,000 and 7,000 entries (depending on source). A private team of jurors chose the entry by Paulino Cubero, then unemployed. The new lyrics received criticism, resulting in them being pulled only five days later, and the idea was scrapped indefinitely.

A number of the autonomous communities of Spain have their own regional anthems.