By: Composed by Frantisek Jan Skroup (1801- 1862)
For: Orchestra
This music is in your basket
View basket
Loading... 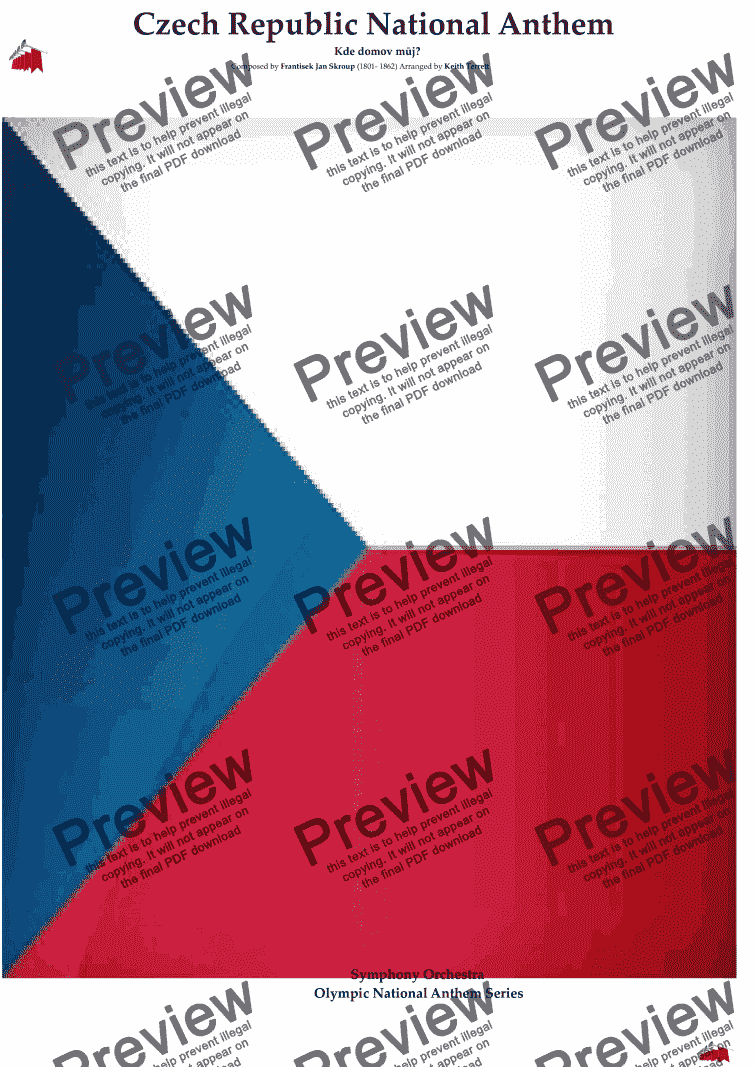 Composer
Composed by Frantisek Jan Skroup (1801- 1862)
Arranger
Keith Terrett
Year of arrangement
2020
Publisher
Music for all Occasions
Difficulty
Moderate (Grades 4-6)
Duration
1 minute
Genre
Classical music
License details
For anything not permitted by the above licence then you should contact the publisher first to obtain permission.

The national anthem of the Czech Republic, written by the composer František Škroup and the playwright Josef Kajetán Tyl; arranged for full Symphony Orchestra. There are versions for Brass Quintet & String Orchestra in my store.

The piece was written as a part of the incidental music to the comedy Fidlovačka aneb Žádný hněv a žádná rvačka (Fidlovačka, or No Anger and No Brawl). It was first performed by Karel Strakatý at the Estates Theatre in Prague on 21 December 1834. The original song consists of two verses (see below). Although J. K. Tyl is said to have considered leaving the song out of the play, not convinced of its quality, it soon became very popular among Czechs and was accepted as an informal anthem of a nation seeking to revive its identity within the Habsburg Monarchy.

Soon after Czechoslovakia was formed in 1918, the first verse of the song became the Czech part of the national anthem, followed by the first verse of the Slovak song Nad Tatrou sa blýska. The songs reflected the two nations' concerns in the 19th century when they were confronted with the already fervent national-ethnic activism of the Germans and the Hungarians, their fellow ethnic groups in the Habsburg Monarchy. Because of the linguistic and ethnic diversity of the First Republic, official translations were made into Hungarian and German as well.

With the split of Czechoslovakia in 1993, the Czechoslovak anthem was divided as well. While Slovakia extended its anthem by adding a second verse, the Czech Republic's national anthem was adopted unextended, in its single-verse version.