Sign in / Register
HomeInstrumentationsSolo instrumentReflections on the Events of September 11, 2001 - II. Dance Macabre

Reflections on the Events of September 11, 2001 - II. Dance Macabre

By: Stas Omelchenko
For: Solo instrument (Tuba)
This music is in your basket
View basket
Loading... 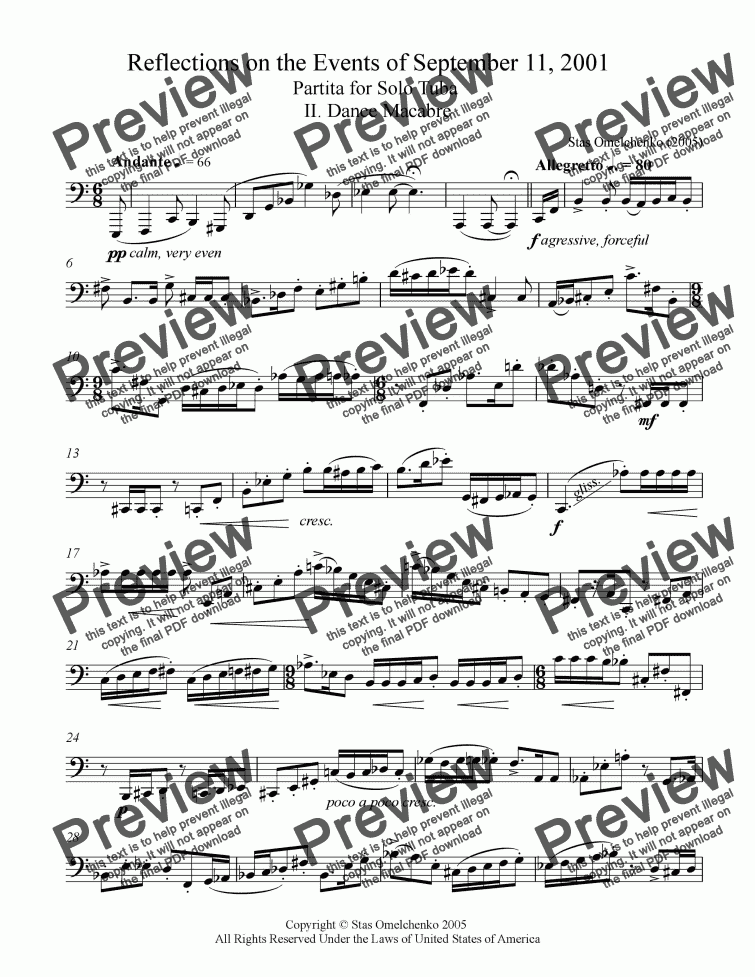 Reflections on the Events of September 11, 2001 - II. Dance Macabre

By: Stas Omelchenko
For: Solo instrument (Tuba)
(+ VAT when applicable)
Note: The publisher requires a minimum purchase of 1 licenses
This music is in your basket
View basket

Composer
Stas Omelchenko
Year of composition
2005
Difficulty
Difficult (Grades 7+)
Duration
6 minutes
Genre
Modern classical music
License details
For anything not permitted by the above licence then you should contact the publisher first to obtain permission.

This partita was composed to commemorate the tragic terrorist events of September 11, 2001. The work is very philosophical in nature and expresses my emotional response to these events. The partita has five movements. The first movement (Prologue) muses over the possible causes that led to the attacks. The second movement (Dance Macabre) describes the terror acts. The third movement (Elegy) is a slow lament in memoriam of victims who died in the attacks. The fast, fourth movement depicts the retaliatory war on terror. The fifth movement (Epilogue) philosophizes on what can we do to prevent terror acts in the future. The work features my musical cryptogram, a short motif that recurs in variations throughout the movements: Eb , C, A, Eb (eS, uT, A, eS).

1) Unless a repeating pattern is involved, accidentals apply only to the note they precede.

2) The movements may be performed independently.

2) All glissandos in the work should be executed by depressing valves into half position.

Reviews of Reflections on the Events of September 11, 2001 - II. Dance Macabre

Sorry, there's no reviews of this score yet. Please .
In order to submit this score to ScoreExchange.com Stas Omelchenko has declared that they own the copyright to this work in its entirety or that they have been granted permission from the copyright holder to use their work. If you believe that this score should be not available here because it infringes your or someone elses copyright, please report this score using the copyright abuse form.