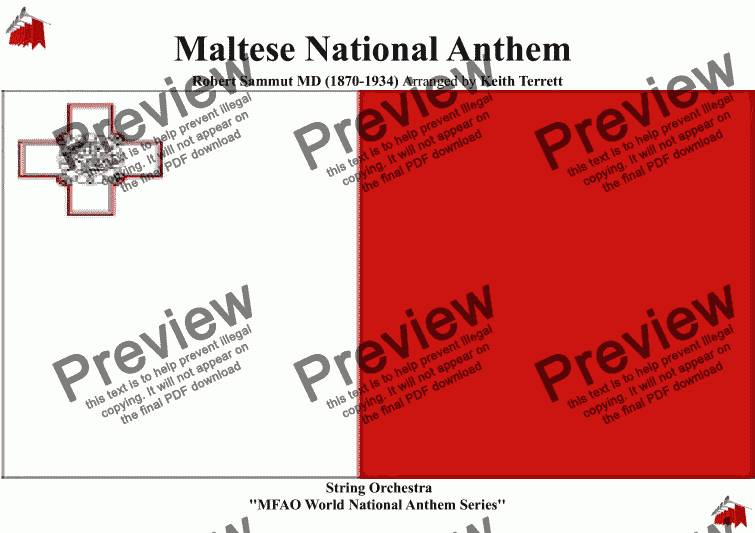 Composer
Robert Sammut MD (1870-1934)
Year of composition
1932
Arranger
Keith Terrett
Year of arrangement
2019
Publisher
Music for all Occasions
Difficulty
Easy (Grades 1-3)
Duration
1 minute
Genre
Classical music
License details
For anything not permitted by the above licence then you should contact the publisher first to obtain permission.

The Maltese National Anthem arranged for String Orchestra. There are versions for Orchestra & Brass Quintet in store.

First performed February 3, 1923, “L-Innu Malti” became the national anthem in 1945. The author of the anthem’s lyrics, Dun Karm Psaila, (Malta’s national poet), was originally comissioned to write a school hymn to already-existing music, written the year before. He thought of the idea of a national anthem in the form of a prayer, to bind together the political parties and the country with the commonality of prayer.

In 1922, Professor Mro. Robert Samut composed a short melody, which was obtained a year later by Dr A.V. Laferla, Director of Primary Schools in Malta, who wanted to have an anthem composed which could be sung by students in Malta's schools as an expression of their Maltese identity. Laferla asked Dun Karm to write lyrics to fit the melody, which then became the Maltese National Anthem.