By: Composed by Uzewyir Hajibeyov
For: Orchestra
This music is in your basket
View basket
Loading... 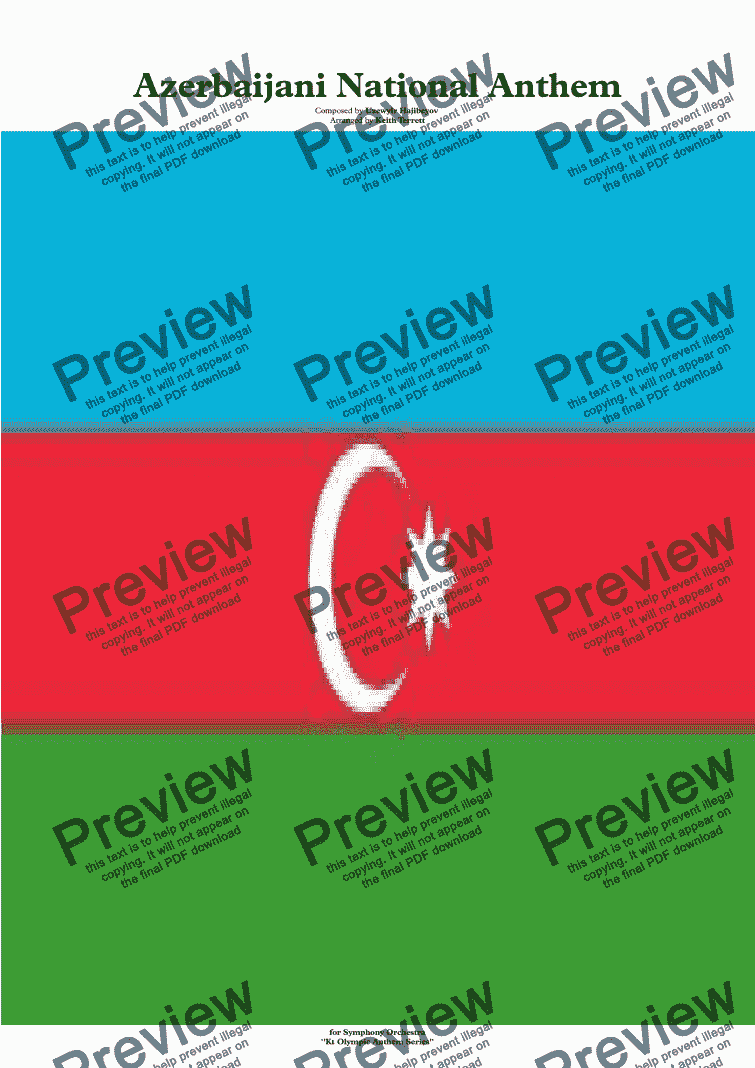 By: Composed by Uzewyir Hajibeyov
For: Orchestra

Composer
Composed by Uzewyir Hajibeyov
Year of composition
1920
Arranger
Keith Terrett
Year of arrangement
2020
Publisher
Music for all Occasions
Difficulty
Moderate (Grades 4-6)
Duration
2 minutes
Genre
Classical music
License details
For anything not permitted by the above licence then you should contact the publisher first to obtain permission.

The national anthem of Azerbaijan arranged for Symphony Orchestra. There are versions for Brass Quintet & String Orchestra in my on-line stores.

Since 2006, a fragment of the lyrics from the national anthem is depicted on the obverse of the Azerbaijani 5 manat banknote.In 2011, to mark the 20th anniversary of Azerbaijan's independence from Soviet rule, the government issued a stamp celebrating the anthem.

n 1919, during the formation of the Azerbaijan Democratic Republic, the new government announced it was accepting submissions from the public for a national anthem, coat of arms and state seal. A prize of 15,000 rubles would be awarded to the citizen who submitted the winning anthem.

Azerbaijani composer Uzeyir Hajibeyov wrote two marches. In 1919, this work received the first award announced by the government of the Azerbaijan Democratic Republic. The second march was the "March of Azerbaijan." According to Turkish musicologist Etem Üngör, "In those years, when Azerbaijan had not yet lost its independence, the march was chanted by military schools before lessons.

In 1989, following several years of changes brought by perestroika, composer Aydin Azimov arranged a modern recording of the anthem by a full symphony and chorus. That fall, Azərbaycan marşı was broadcast on television and radios in Azerbaijan, 70 years after it was introduced.

After the dissolution of the Soviet Union, in spring 1992, the leaders of the independent Azerbaijani government proposed that the original anthem should be restored as the anthem of Azerbaijan. The Milli Mejlis (National Assembly) signed it into law on 27 May 1992.

Scored for full Symphony Orchestra, I would like to hear this arrangement live with a top notch orchestra!

Better then the Peter Breiner or Sheppard Olympic versions.