By: Composed by Zakharia Paliashvili (1871-1933)
For: String orchestra
This music is in your basket
View basket
Loading... 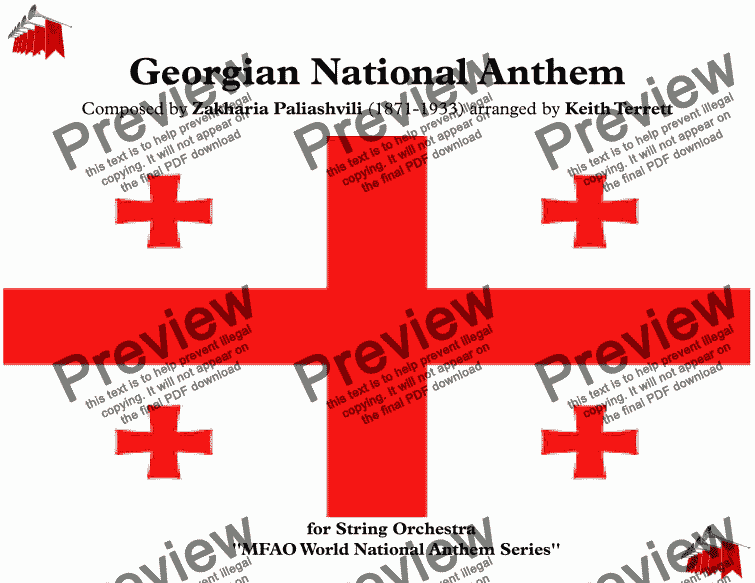 By: Composed by Zakharia Paliashvili (1871-1933)
For: String orchestra

Composer
Composed by Zakharia Paliashvili (1871-1933)
Year of composition
2004
Arranger
Keith Terrett
Year of arrangement
2020
Publisher
Music for all Occasions
Difficulty
Easy (Grades 1-3)
Duration
1 minute
Genre
Classical music
License details
For anything not permitted by the above licence then you should contact the publisher first to obtain permission.

The National Anthem of Georgia arranged for String Orchestra. There are alternative versions for Symphony Orchestra & Brass Quintet in my stores.

"Tavisupleba" (Georgian: თავისუფლება) is the current national anthem of Georgia. The anthem, whose title means "Freedom", was adopted in 2004, along with the new national flag and coat of arms. The symbols’ change was brought about upon the successful overthrow of the previous government in the bloodless Rose Revolution. The music, taken from the Georgian operas Abesalom da Eteri ("Abesalom and Eteri") and Daisi ("The Nightfall"), by the Georgian composer Zachary (Zakaria) Paliashvili (ზაქარია ფალიაშვილი, 1871–1933), was adapted to form the anthem by Ioseb Kechakmadze (იოსებ კეჭაყმაძე). The lyrics were composed by David Magradze (დავით მაღრაძე).

On April 23, 2004, a few months after a popular revolt replaced the government and altered the national symbols, a new national anthem was adopted. The music was taken from the Georgian operas “Abesalom da Eteri” and “Daisi” by the Georgian composer Zakaria Paliashvili, and were composed into an anthem by Joseb Ketschakmadse.

Need an anthem fast? They are ALL in my store!All my anthem arrangements are also available for Orchestra, Recorders, Saxophones, Wind, Brass and Flexible band. If you need an anthem urgently for an instrumentation not in my store, let me know via e-mail, and I will arrange it for you FOC if possible! keithterrett@gmail.com

Need anthems for your next sporting or other event? e-mail me your requirements. I can supply high quality MP3's of any of my national anthem arrangements. An arrangement of the national anthem of The Netherlands arranged for full Symphony Orchestra.