By: Composed by Charles Christian Albrecht (1817–1895)
For: String orchestra
This music is in your basket
View basket
Loading... 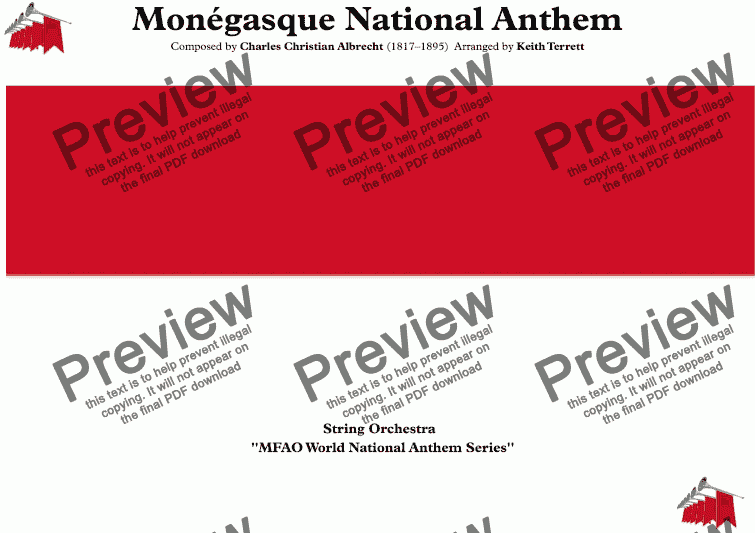 By: Composed by Charles Christian Albrecht (1817–1895)
For: String orchestra

Composer
Composed by Charles Christian Albrecht (1817–1895)
Year of composition
1841
Arranger
Keith Terrett
Year of arrangement
2020
Publisher
Music for all Occasions
Difficulty
Moderate (Grades 4-6)
Duration
1 minute
Genre
Classical music
License details
For anything not permitted by the above licence then you should contact the publisher first to obtain permission.

An arrangement of the national anthem of Monaco for String Orchestra. There are alternative versions for Brass Quintet & full Orchestra in my stores.

Monaco’s first anthem dates from 1841. The first set of lyrics were used as a marching song for the Guarde Nationale, in which the author, Theophile Bellandro, was a captain. The music by Charles Albrecht along with the lyrics were officially adopted in 1867. In 1931 new lyrics were written in Monegasque, the native language of Monaco. The official lyrics are just one verse, and are not often sung, except at official occassions (the instrumental versions are heard more often). Also, despite French being more prevalently spoken in the principality, and French words exist for the anthem (under the title “Hymne Monégasque”), only the Monegasque lyrics are official.

Need anthems for your next sporting or other event?

e-mail me your requirements. I can supply high quality MP3's of any of my national anthem arrangements.