By: Patrick Heeney (1881-1911) Arranged by Keith Terrett
For: String orchestra
This music is in your basket
View basket
Loading... 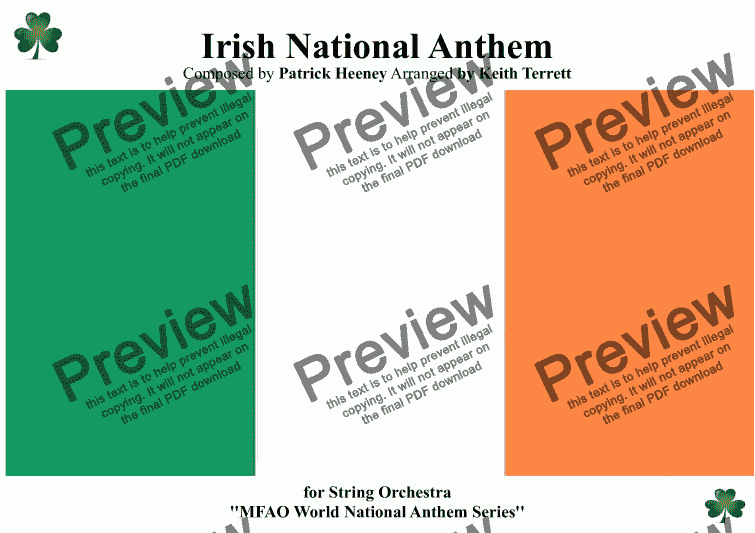 By: Patrick Heeney (1881-1911) Arranged by Keith Terrett
For: String orchestra

Composer
Patrick Heeney (1881-1911) Arranged by Keith Terrett
Year of composition
1912
Arranger
Keith Terrett
Year of arrangement
2020
Publisher
Music for all Occasions
Difficulty
Easy (Grades 1-3)
Duration
1 minute
Genre
Classical music
License details
For anything not permitted by the above licence then you should contact the publisher first to obtain permission.

An arrangement of the national anthem of Ireland for String Orchestra. There are alternative versions for String & full Orchestra in my stores.

The text of Amhrán na bhFiann, consisting of three stanzas and a chorus, was written in 1907. It was first published in the newspaper, Irish Freedom in 1912. The chorus solely was quietly adopted as the National Anthem in 1926, amid much discussion about the national anthem. The anthem was originally written in English, the later Irish translation by Liam Ó Rinn is much more commonly sung in the country. A section of the National Anthem (consisting of the first four bars followed by the last five) is also the Presidential Salute. There has been some criticism about the anthem due to its militant nature and anti-British tone. The words “Fianna Fáil” (Warriors of Ireland) appear in Ó Rinn’s translation, later adopted as the name of an Irish political party, some advocate this be changed to “laochra fáil” (heroes of Ireland) instead. Also, some have argued that the melody is difficult to play, whereas others have pointed out that the whole song has been performed, instead of the chorus (which is the official anthem), or has been played at the wrong speed, both of which have happened at recent Olympic Games. An anthem composed by Phillip Coulter called “Irelands Call” is used as a non-sectarian anthem, which is used by athletes from both Ireland and Northern Ireland when competing together as a unified team. For more of my original music, great arrangements and all the national anthems of the world, check out my on-line stores: http://www.scoreexchange.com/profiles/keith_terret http://musicforalloccasions.org.uk http://www.sheetmusicplus.com/search?Ntt=keith+terrett Need an anthem fast? They are ALL in my store! All my anthem arrangements are also available for Orchestra, Recorders, Saxophones, Wind, Brass and Flexible band. If you need an anthem urgently for an instrumentation not in my store, let me know via e-mail, and I will arrange it for you FOC if possible! keithterrett@gmail.com Do you love national anthems and their history, then join me on twitter, facebook, instagram & soundcloud for frequent updates & news on my Olympic bid!

Need anthems for your next sporting or other event? e-mail me your requirements. I can supply high quality MP3's of any of my national anthem arrangements.