By: J. Marshall Bevil
For: Solo instrument (Organ [manuals])
This music is in your basket
View basket
Loading... 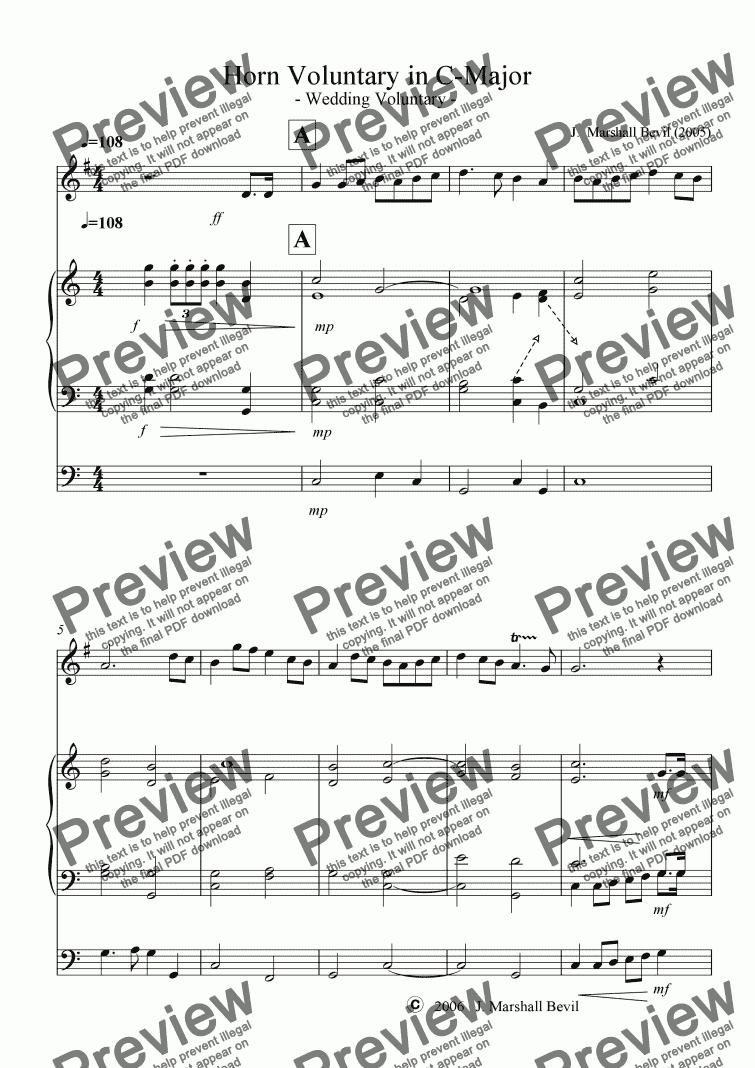 Composer
J. Marshall Bevil
Year of composition
2005
Lyricist
none
Publisher
Forensic Musicological Consultants
Difficulty
Moderate (Grades 4-6)
Duration
5 minutes
Genre
Classical music
License details
For anything not permitted by the above licence then you should contact the publisher first to obtain permission.

This piece was composed as a wedding recessional for one of my great-nieces. It also was written as something of a show piece for my son, who was then (2006) Principal Horn in the 2005-2006 Texas Music Educators’ Association High School Honor Band, and was later a member of the Golden Band from Tigerland at Louisiana State University, where he attended on a full horn performance scholarhsip. As of 2012, he is a graduate student in horn performance at Roosevelt university, Chicago. The style of the piece is that of the English voluntaries of the late seventeenth century, by Henry Purcell, Jeremiah Clarke, _et al_. Arguably, the roots of that style were in the works of Lully, Cambert, M-A Charpentier, de la Lande, and others who wrote for the Court of Louis XIV and contemporaneous institutions in France. While the work can be used as a wedding processional or recessional, it also can be used as either an independent concert piece or a piece of functional worship service music. For example, it could serve as a prelude to my "Canticle of Praise." I would place it in the upper half of the moderate difficulty zone due to the range of the horn part, its articulation requirements, and the occurrence of several running passages across register breaks. Lightness and nimbleness of execution are imperative, and the horn should assume almost a trumpet-like character. I would not recommend transposition unless the solo instrument is changed (to clarino trumpet, for example). In particular, setting the horn part any higher would be pushing that instrument’s range beyond the abilities of most players, and the uppermost notes would be quite strident in nearly every instance.